Why was the swordsman of Calais chosen as Anne Boleyn's executioner?

Displaying an act of "mercy", King Henry VIII dispatched a skilled executioner to perform the execution by sword rather than by axe or being burned at the stake.

According to author and historian Dr. Eric Ives, the swordsman was very skilled.

her beheading by a first-class executioner — “an expert in the use of the heavy continental executioner’s sword which could cut the head off a prisoner who was kneeling upright, in place of the clumsier English axe needing the prisoner’s chin on the block.”

Anne Boleyn herself even mentioned the skill of the swordsman.

An excerpt from a letter to Thomas Cromwell from William Kingston on informing Anne Boleyn on the postponement of her execution:

And then she said "I heard say the executioner was very good, and I have a little neck," and put her hand about it laughing heartily.

Why was this particular executioner chosen?

The question breaks down into two parts: Why a swordsman instead of an axeman, and why the swordsman of Calais.

I now believe that the answer I posted earlier was only partially correct. This source offers a more likely answer, that "Henry did not care about Anne's feelings," and that he chose the sword as "the symbol of Camelot, of a rightful king."

On the other hand, Anne didn't seem to mind the substitution. According to the article"

"‘I heard say the executioner was very good and I have but a little neck,’ Anne said the day before her execution, and laughing, she put her hands round her throat. It was, at least, to be a quick death: her head fell with one blow, her eyes and lips still moving as it landed on the straw."

Anne Boleyn's PREFERENCE was for a "swordsman" rather than an "axeman." (This is different from my earlier, and now "retracted" statement that it was her request.) In the letter referenced in the question, the warden of the Tower of London reported that: "I have seen many men and also women executed, and that they have been in great sorrow, and to my knowledge this lady has much joy in death."

The initiative appears to have come from Henry VIII, who seemed to anticipated that the swordsman would provide a less painful, and hence "preferred" death (unless they had discussed this beforehand, perhaps in another context). If so, he is a better man than I have given him credit for.

That may be because she could then die kneeling upright, instead of with her head on the block.

The Calais swordsman was chosen as the "best in class."

Anne Boleyn was treated with more consideration than Mary Queen of Scots, who died with her head on the block, requiring TWO strokes of an axe, and also Catherine Howard, whom Henry also executed.

Cutting off a head in one blow is somewhat harder than it may sound; the main issues are that the vertebrae are hard bones and unless the executioner is skilled he could miss, hitting the head or back instead. If the executioner misses by even an inch things can get very messy.

In those days a class of professional executioners existed who used specialized swords designed for decapitation. An example is shown below: 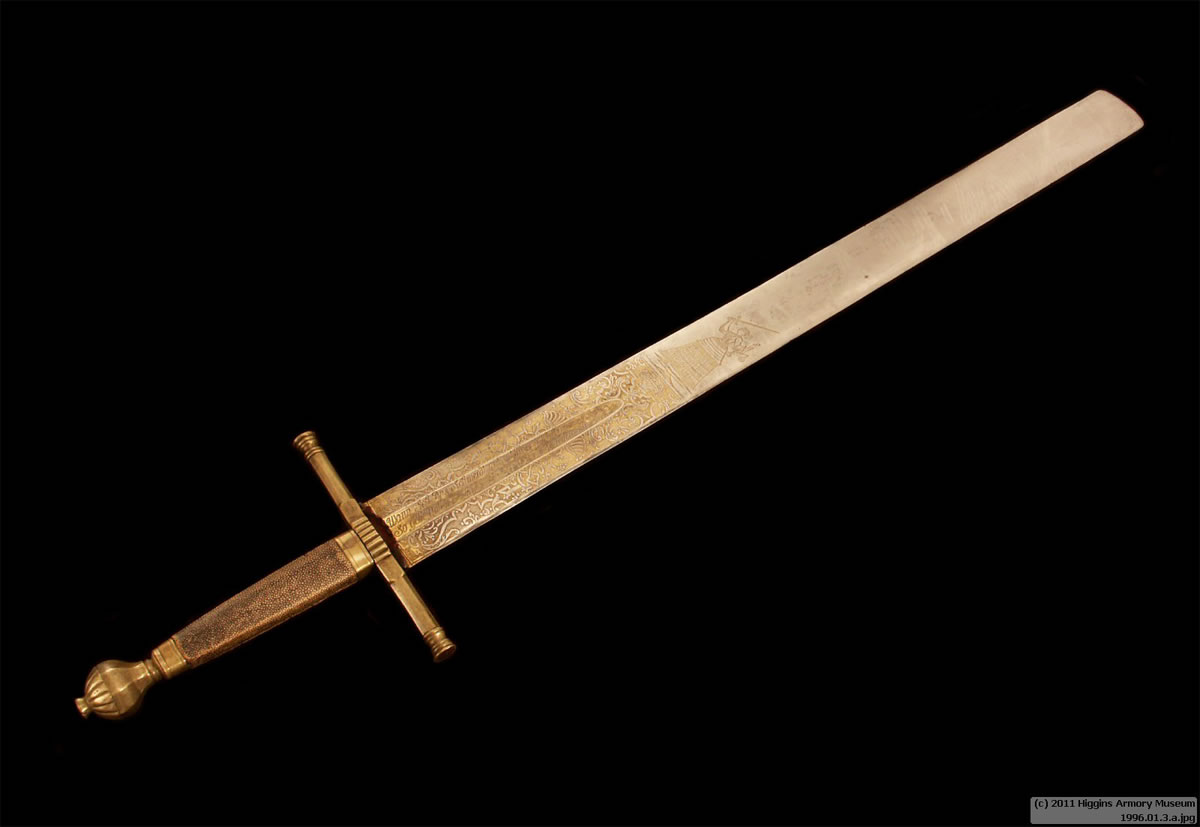 This sword, from the Higgins Armory, is inscribed with a short encomium on justice on the obverse (the reverse is shown in the photo). When sharpened, such a sword will make a clean cut and due to its weight will go right through bone no problem.

The skill is in swinging it so that it hits exactly the right place.

If you have any doubts as to the difficulty of this, simply get a 3-foot long 2x4 and plant it end-wise into the ground. Then take a 1/2" steel rod and try to hit it solidly lengh-wise. You will soon see it takes quite a lot of practice to do such a thing consistently.

Having visited the Tower of London last week where Anne was beheaded, the Yeoman giving our tour told how Anne's doctor wrote to Henry to say that Anne had a crippling and debilitating fear of beheading by axe (he joked it was the olden day equivalent of a "sick note") and that was why Henry sent for the swordsman.

I live in Belgium, the former Low countries! In my regions it was normal if you were from high birth that the decapitation was done by the sword without discussion, and if you were of lower birth than they performed it with an axe! I am surprised to read that this rule didn't stand in England and that for high birth it was normal to use an axe?

Not the answer you're looking for? Browse other questions tagged england death-penalty tudor-period henry-viii or ask your own question.

10
Why did the Nazis guillotine criminals but mostly hang political enemies, and why were the White Rose group an exception?
8
Where is the sword used to execute Queen Anne Boleyn?

4
Was it customary for an executioner in Elizabethan England to ask for forgiveness from the executed?
10
Did a mob of men dressed in skirts threaten the life of Anne Boleyn?
9
How much knowledge of the past was destroyed during the Dissolution of the Monasteries?
4
Why didn't Anne Boleyn consent to divorce?
9
Why are there shields present on the sides of Henry VIII ships, did they serve any function or was it pure decoration?
8
Where is the sword used to execute Queen Anne Boleyn?
8
What was the motivation for the Church of England to begin recording births, marriages and deaths in 1538?