Are there any existing foreign language teaching texts from the Ancient Near East?

The various cultures of the Ancient Near East spoke a wide array of languages and we know that there was plenty of communication between cultures. We even have a language like Akkadian that served as a lingua franca between many different cultures. Diplomats, and others, must have received training in foreign languages. Do we have any written grammars from the Ancient Near East used for such teaching? Dictionaries? Explanations of points of grammar? Even exercises used by students?

There is evidence of the use of dictionaries and dialogues but we should not imagine that the resources available came anywhere close to matching the vast array of second language learning materials that are available today. It is also highly likely that what are today known as authentic materials (objects, texts etc which people encounter in their daily lives) were widely used.

Authentic or 'real world' materials, although by definition not designed specifically for classroom use, have been increasingly used in language teaching since the traditional grammar translation method has sharply declined in popularity. Thus, in key areas, the main teaching methods used today (most of which focus heavily on 'real life' situations, often using everyday objects) more closely resemble learning experiences of the ancient Near East than methods which were popular just 100 years ago.

The (practical) need to learn another language probably stretches back into pre-history and certainly took place in Mesopotamia.

As early civilisations discovered and conquered other lands, the need to communicate with speakers of other languages arose. Historians have found evidence that second language teaching took place among the Sumerians from around 2700 BC

Hiroshi Yonekura (pdf download), citing Renzo Titone’s Teaching foreign languages : an historical sketch, notes that “...textbooks which are considered to have been used about B.C. 2500 were discovered.” When the Sumerians were conquered by the Akkadians, what was probably the first bilingual lexicon or dictionary was created.

However, as Mishan states,

Much of this early language learning and teaching in colonial contexts then and later (for example, in the Egyptian and Roman Empires) may be said to have been authentic in spirit, in that the language was usually acquired in non-classroom situations and without specially prepared language materials. It was usually done via direct contact with native speakers, either through sojourns in foreign parts or, as was common among the Romans, through the employment of a Greek-speaking tutor or slave

These 'sojourns abroad', though, are also common today; so too is the practice of hiring native speaker tutors, especially in countries such as Japan and Korea.

There is also evidence of language teaching materials used by the Romans. Eleanor Dickey, Professor of Classics at the University of Reading, states

Two thousand years ago, when the Romans ruled a vast empire whose inhabitants spoke all sorts of different languages, many of those inhabitants wanted to learn Latin. So they signed up for Latin classes, where they learned using textbooks containing little dialogues about everyday life. These dialogues are in some ways remarkably similar to texts used today to teach modern foreign languages 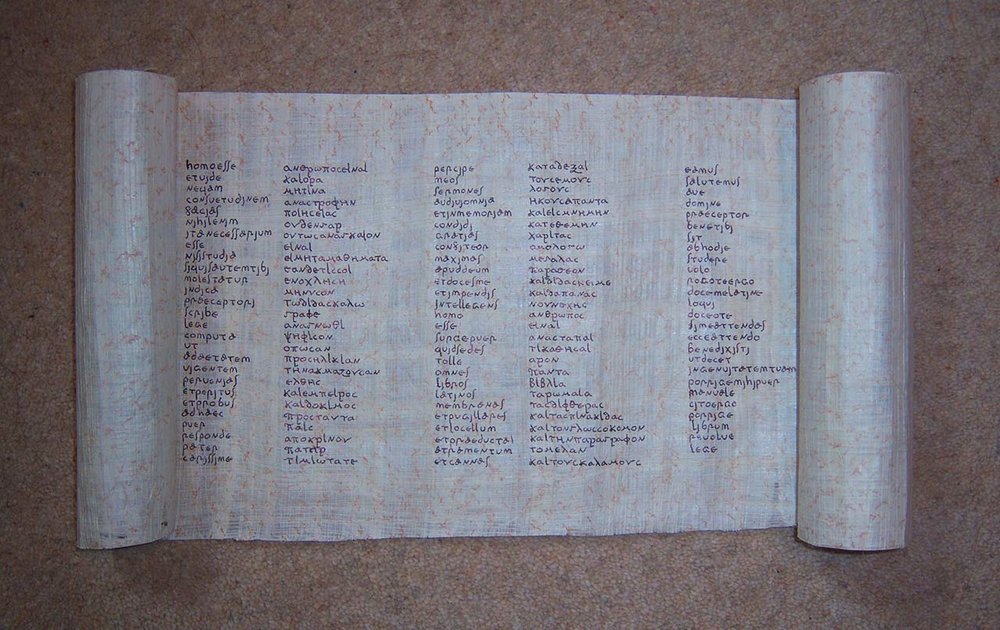 "An ancient Latin textbook as it appeared in the fourth century AD (reconstruction)." https://www.latinitium.com/blog/latin-classes-during-the-roman-empire

Well, written language was, at the time, an economic tool primarily. It was used to record business, political and liturgical transactions, and to cary on a conversation at a distance through correspondance. The things we use it for, instructive texts (such as language instruction courses) and recreational reading, developed much, much later.

But! There are ancient documents that are meant to instruct scribes in how to learn and teach writing itself - one such is detailed in this online book. (Begins on page 181 "How did they learn Cuneiform?" by Niek Veldhuis). These were word lists, lists of kings, and snippets of seemingly unrelated text, meant as a "primer" for the neophyte scribe to copy.

20
Did foreign language phrase books exist in the ancient world?

10
Are there any remaining existant texts that describe the styles and techniques of Medieval European swordsmanship?
13
Why didn't Turkish become an official language in former Ottoman colonies in the Middle-East and North Africa?
3
Are there any images from ancient times in which Heracles is shown with a cornucopia?
8
Is there any record of ancient Israelite contact with Indo-Europeans?
3
Are there any texts/translations of the 4 main Egyptian creation myths?
4
How much of a effect did linguistic relativism play in ancient Europe?
47
Aside from the Pyramids, what is the tallest man-made structure still standing in Europe & the Near East from ancient times?
20
Did foreign language phrase books exist in the ancient world?
23
Are there historical texts in England querying where Roman structures came from?