Were the ancestors of Malays originally from Yunnan, China?

The research discovered that the Malays in these sub-ethnic groups were genetically composed of some Proto-Malay (orang asli Melayu), Semang and Indian DNA, with at least 20 per cent Malay and and 52 per cent Chinese DNA.

"This finding corresponds with a theory that these Malays originated from Austronesia in Yunnan, China," Professor Zilfalil said, " with the first wave of migration from Austronesia to Southeast Asia occurring in 25, 000 BC and the second one in 1, 500 BC".

The professor added that "the Malay language used in the Malay Peninsula, Sabah and Sarawak also belongs to the Austronesian stock".

Is there corroborating historical evidence that the Malays of Malaysia and Indonesia are actually descendants from residents of Yunnan, China?

I will take this question:

The only answer, at this point, is: we don't know.

We don't know because they are competing models to explain how indigenous Malays (Proto-Malays) arrived at Island Southeast Asia (ISEA).

The original hypothesis was Out of Taiwan by Peter Bellwood, in his book: "Prehistory of the Indo-Malaysian Archipelago" (University of Hawaii Press, 1997). His original hypothesis rested mainly on linguistics, namely, the Austronesian family language, and because of population pressure from agriculture (agrarian expansion). Since then he has released a revised 2007 edition, with updates to cover more ground, and freely available as ebook now.

Since then, there's been other hypotheses, not based on agrarian but fisher-forage-trader culture and via southwest China (Yunnan?), into Vietnam, Thailand, and finally Peninsular Malaysia. Research from genetic, archaeological and linguistic analysis are inconsistent.

This diagram might help, left (new hypothesis) vs right (Out-of-Taiwan). I have kept title of article and explanatory notes: 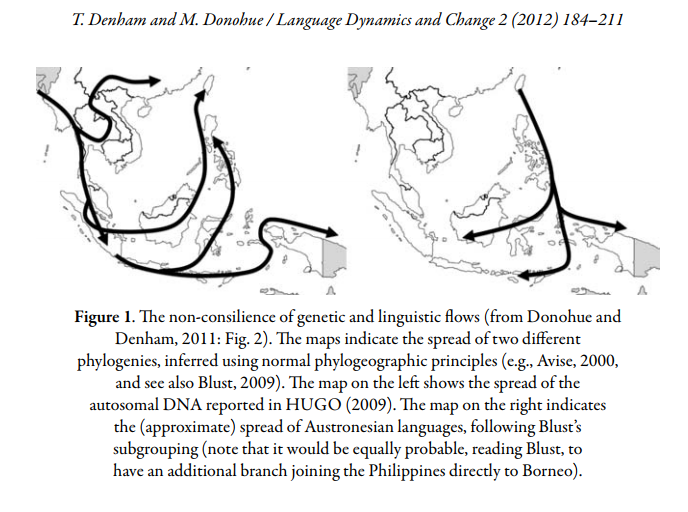 This volume brings together a diversity of international scholars, unified in the theme of expanding scientific knowledge about humanity’s past in the Asia-Pacific region. The contents in total encompass a deep time range, concerning the origins and dispersals of anatomically modern humans, the lifestyles of Pleistocene and early Holocene Palaeolithic hunter-gatherers, the emergence of Neolithic farming communities, and the development of Iron Age societies. These core enduring issues continue to be explored throughout the vast region covered here, accordingly with a richness of results as shown by the authors.

Befitting of the grand scope of this volume, the individual contributions articulate perspectives from multiple study areas and lines of evidence. Many of the chapters showcase new primary field data from archaeological sites in Southeast Asia. Equally important, other chapters provide updated regional summaries of research in archaeology, linguistics, and human biology from East Asia through to the Western Pacific.’

Malaysia was under the influence of the Cholas for quite a period of time. There is some Indian percentage in Malaysia, and Tamils did control and are still in Malaysia now.

austronesians are not necessarily han chinese, same the other way around. Anyway 25 000 years ago there was neither a chinese nor a malay identity, it was pre-historic. Just various interrelated tribes that intermingled and moved on their own migratory routes. Some future china tribes went north, some austronesian (future malay) went south east. In fact the whole chain from what is now Yunnan-Laos-Vietnam- Cambodia- Malaysia-indonesia comes from the same ausatronesian stock. Their culture is very similar because it came from the same source & tradition. Proudly they also explored & settled into the Indian & Pacific oceans! The north bound tribes started a great culture on the yellow river where rice farming was initiated that spread over the whole Eurasian continent. To each his own, I'd say!

Not the answer you're looking for? Browse other questions tagged indonesia malaysia or ask your own question.

6
How did the ancestors of proto-Malagasy in South Borneo reach Madagascar?

9
What universities existed in Dutch East Indies, and how available were they to the native population?
1
Where were the Straits dollars printed?
4
How did laborers travel from China to Malaya in the early 19th century?
34
Why is the island of Java so populated?