How did Romans organise their files?

I know how they wrote the information down:

But I'm interested how it was stored. Ruling for 600+ years means they must have had to keep track for a lot of information (censuses, jail records etc).

How was this stored?

There were three common methods. The first and most common was to use a diploma which is two boards sandwiched together with leather thongs. Papyrus is very fragile, so if you had something valuable written down you needed a binder like this to protect it. Also, writing can be done right on the boards themselves, not even using paper. Many diplomas had wax on them, so you could erase them, but obviously you would not do this for a legal contract.

The second method is to use a cubby. The paper was rolled up and placed in a square compartment. So, you would have a matrix of boards making lots of small 3-4 inch cubbies. Normally this would only be done by somebody who was pretty rich. Essentially it is a bookshelf for scrolls. Note that one scroll can be pasted onto another one. So, if a business man had a lot of accounts he can just keep pasting onto a scroll and it gets longer and longer. So, a businessman might have one cubby for each thing, store, property, ship, whatever. The scroll having the records for that entity is kept in its own cubby. In other cases scrolls would just be stacked up on each other on a plain shelf, as in this rendering of a relief dated to the time of Constantine (4th century): 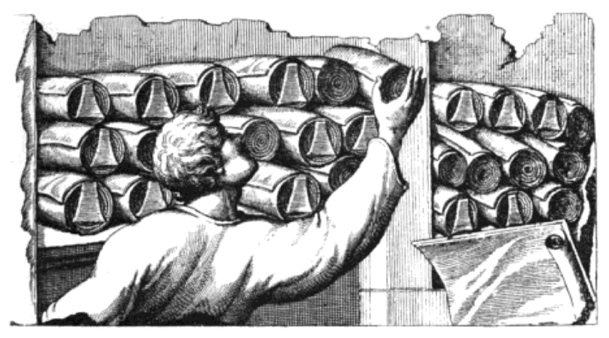 Finally, the third basic method was to use a jar. If the jar was glazed and sealed it was a good way to keep the scroll dry, which was a big factor because Roman houses were pretty wet and papyrus tends to degrade rapidly in moist climates. Jars were also a lot cheaper than bookshelves, so for a middle class person, they were the obvious choice.

Not the answer you're looking for? Browse other questions tagged roman-empire writing or ask your own question.