What led to the first fight in the American Civil War?

After Lincoln was elected president, 11 states seceded from the Union to form the Confederate States of America. What circumstances surrounding this secession led to the first battle of the war, and where did the first battle take place?

After President Lincoln's election on the 6th of November 1860, the eleven Confederate states did not secede immediately. South Carolina, and then the remaining six states of the lower south (Mississippi, Florida, Alabama, Georgia, Louisiana and Texas) seceded from the Union between the 20th of November and 1st of February 1861, leaving Arkansas, Tennessee, Virginia and North Carolina still loyal to the Union.

Unionists from those northern slave states made it clear that they would remain loyal so long as the incoming Lincoln administration guaranteed the safety of slavery in states where it already existed, but more ominously employed no 'coercion' against the seceded states.

Fort Sumter, a strategically important military installation in Charleston harbour, became the focal point for that question of 'coercion'. 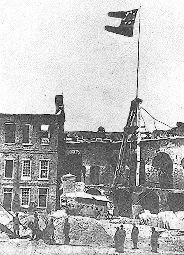 During his inaugural address Lincoln, cognisant of the fragile loyalty of northern slave states, hoped to place responsibility for the start of hostilities on the newly elected Confederate president Jefferson Davis. He stated that the United States intended to:

hold, occupy, and possess the property, and places belonging to the government, and to collect the duties and imposts; but beyond what may be necessary for these objects, there will be no invasion - no using of force against, or among the people anywhere.

. . . You can have no conflict, without yourselves being the aggressors.

This statement was deliberately vague about what 'occupy and possess' meant, since the Confederate states had long since seized almost all federal buildings in the south. Lincoln hoped that Unionist sentiment would reassert itself in the south before this question was tested with force.

Time ran out in April 1861 as supplies for the federal garrison at Fort Sumter began to dwindle. In March, having been informed by Major Anderson (the fort's commander) that supplies were running low, decided to send an unarmed transport to resupply the fort. Lincoln hoped that if Confederates around Charleston harbour fired on the ship, then the north would appear as the injured party.

Jefferson Davis decided to the pre-empt the arrival of the ship and ordered a request for the fort's surrender be sent before it arrived. Anderson refused to capitulate and at 4:30 am on the 12th of April southern guns opened fire.

Thirty six hours later, Anderson and his garrison surrendered and the following day Lincoln declared a state of insurrection and called out 75,000 militia from the northern states.

This call galvanised sentiment in the south and between the 17th of April and the 20th of May, Virginia, Arkansas, North Carolina and Tennessee all seceded. The addition of these states provided nearly 40% of the troops to Confederate armies and guaranteed a long and bloody conflict.

Quotes and references from:

After its secession, South Carolina demanded that the US withdraw its military presence from Charleston, but instead the Army commander relocated his forces to the island fortress at the mouth of Charleston Harbor. This led to a standoff, and when the fort's supplies grew thin President Lincoln sent in supply ships. At this point the Confederates demanded surrender of the fort, which was refused, and so they began artillery bombardment from the shores surrounding the harbor.

A much more detailed account of the events leading up to the battle can be found at CivilWar.org

I would argue that Fort Sumter (Apr 12, 1861 – Apr 14, 1861) was not the first Battle of the Civil war because the Union never contested (battled) for the fort. Officially there were no civil war casualties at Fort Sumter. The Union knew holding the fortress was an impossible task. They could not be resupplied by sea. They did not have the ordinance to defend themselves (no exploding munitions, only steel shot cannonballs). Thus the Union stalled for time, and in the end (one could say wisely) made the priority to safeguard the lives of their soldiers with only tacit defense. The first few hours of the bombardment the Union didn't even return fire. When the Union did return fire, they used cannons which could not easily hit the confederate positions, (lower cannons) because to use the higher more effective cannons would expose themselves to confederate fire.

The fortress had cannons capable of hitting the nearby town of Charleston (3 miles away), but the Union general elected not to fire those cannons at all. There were two deaths at Fort Sumter, both occurred after the Union surrendered. Union General Anderson's only condition for surrender was the Union elected/insisted actually to give themselves a 100 cannon salute before withdrawing their flag (perhaps trying to use up there ordinance). On the 48th volley a cannon exploded killing two Union soldiers in what could loosely be termed friendly fire, but would more accurately be described as an accident because the two soldiers blew themselves up. These men are not even counted as the first casualties of the War. So that hardly seems like Sumter rises to the level of being called a battle given there were no casualties, nor any serious attempt by the Union General to defend his fortress. The Union General was always trying to stall, and while stalling safeguard the lives of his men. That's my opinionated opinion.

The first official casualty of the Civil War was Elmer E. Ellsworth on May 24, 1861, six weeks after Sumpter. Mr. Ellsworth was a bodyguard and friend to Abraham Lincoln. He lead a squad of cavalry across the Potomac River to remove a large confederate flag which was reportedly visible from the white house. The flag belonged to innkeeper and secessionist James W. Jackson, who shot Ellsworth dead after Ellsworth took down his flag, and shortly before Ellsworth's troops shot Mr. Jackson dead. But Mr. Jackson was not in the Confederate military so while this goes down as the first casualty, it can't be called the first battle.

The first casualty of the civil war due to enemy action occurred two months after Sumter in Northern Virginia at the Battle of Fairfax Courthouse. The Union had sent troops in to occupy Northern Virginia and thus secure the vicinity of it's capitol. The confederates met them at Fairfax City Virginia, June 1 1861.

If we take Fairfax Courthouse as the first Battle where all 11 Confederate states had seceded, and not Sumpter where only 7 states had left the union, then the circumstances surrounding the first battle involved Sumpter and the reaction to Sumpter by the federal government as key events leading up to the first battle.

What's going on with the other 4 secessionist states?

Lincoln Calls for Troops to put down "insurrection". April 15, 1861

**To the dispatch from the War Department, Gov. LETCHER(of Virginia) made this reply: **.

SIR: I received your telegram of the 15th, the genuineness of which I doubted. Since that time (have received your communication, mailed the same day, in which I am requested to detach from the militia of the State of Virginia "the quota designated in a table," which you append, "to serve as infantry or riflemen for the period of three months, unless sooner discharged."

In reply to this communication, I have only to say that the militia of Virginia will not be furnished to the powers at Washington for any such use or purpose as they have in view. Your object is to subjugate the Southern States, and a requisition made upon me for such an object -- an object, in my judgment, not within the purview of the Constitution or the act of 1795 -- will not be complied with. You have chosen to inaugurate civil war, and having done so, we will meet it in a spirit as determined as the Administration has exhibited towards the South. Respectfully,

Table of Troops being requested April 15, 1861 by all non secessionist states. (Note the Union is requesting 2000 troops and 111 officers from Virginia) 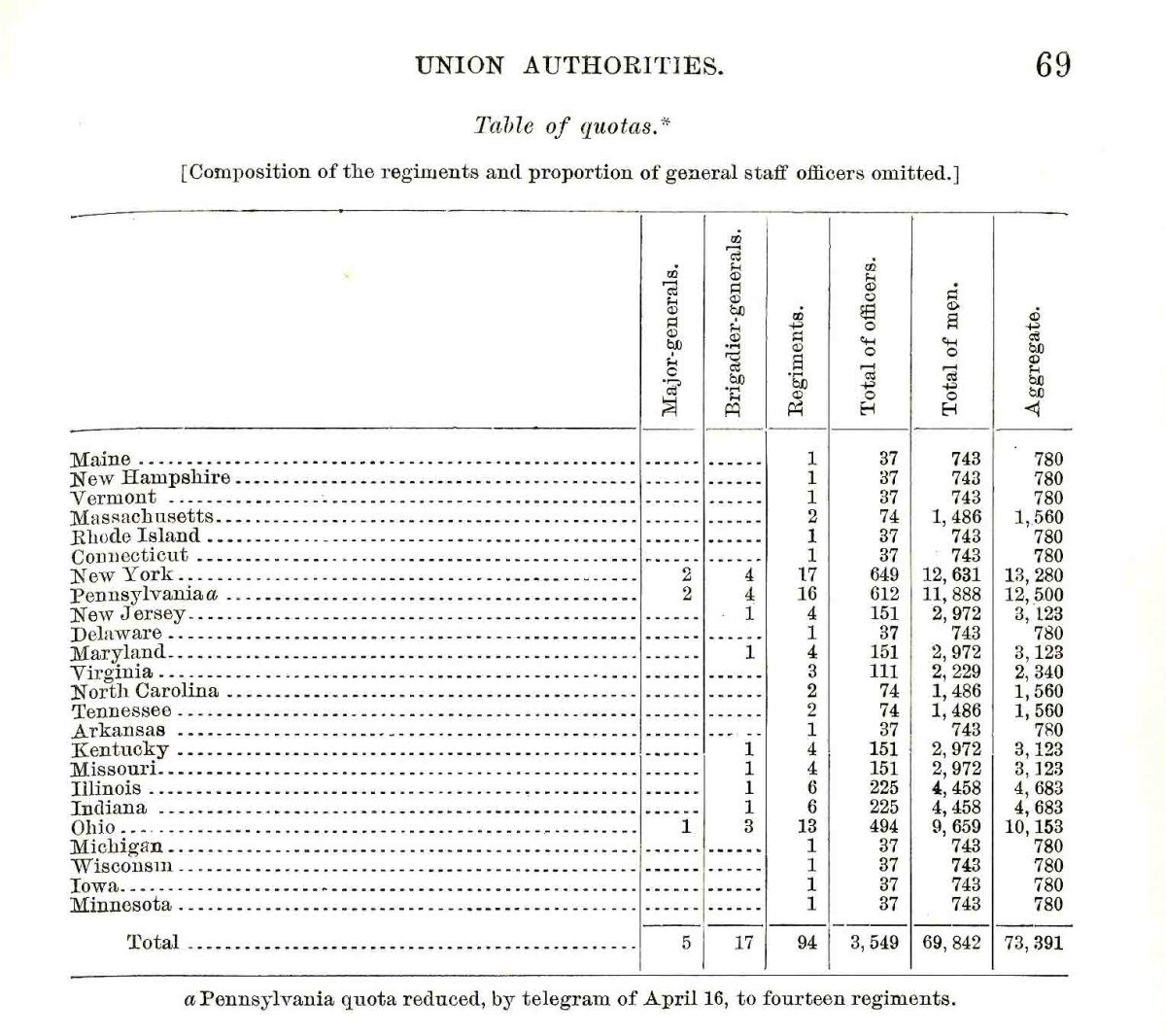 So the North decides on a strategy to invade the South and put down the insurrection. Their call for troops from the States leads to 4 more states declaring independence. The resulting invasion of the south, union troops marching into northern Virginia leads to the first battle of the American Civil War at Fairfax courthouse.

There is no logic in Elmer E. Ellsworth being recognized as the first casualty of the civil war on May 24th while ignoring the four dead union soldiers who died in Baltimore April 19, 1861. It wasn’t meant to be logical but meant to bestow an honor.

Likewise there is no logic in calling Sumter the first battle of the civil war. It wasn’t a battle. It was an evacuation where the union able to contest never tried to do so. The title is an honorarium and doesn’t reflect the events as we know them. But Sumpter was a key event which brought into focus all the events and escalations which were to come.

Not the answer you're looking for? Browse other questions tagged united-states 19th-century american-civil-war or ask your own question.