Who are the WWII German Officers in this picture?

Please help identify the scene. Who are the officers? Is this Paris after Germany's invasion? 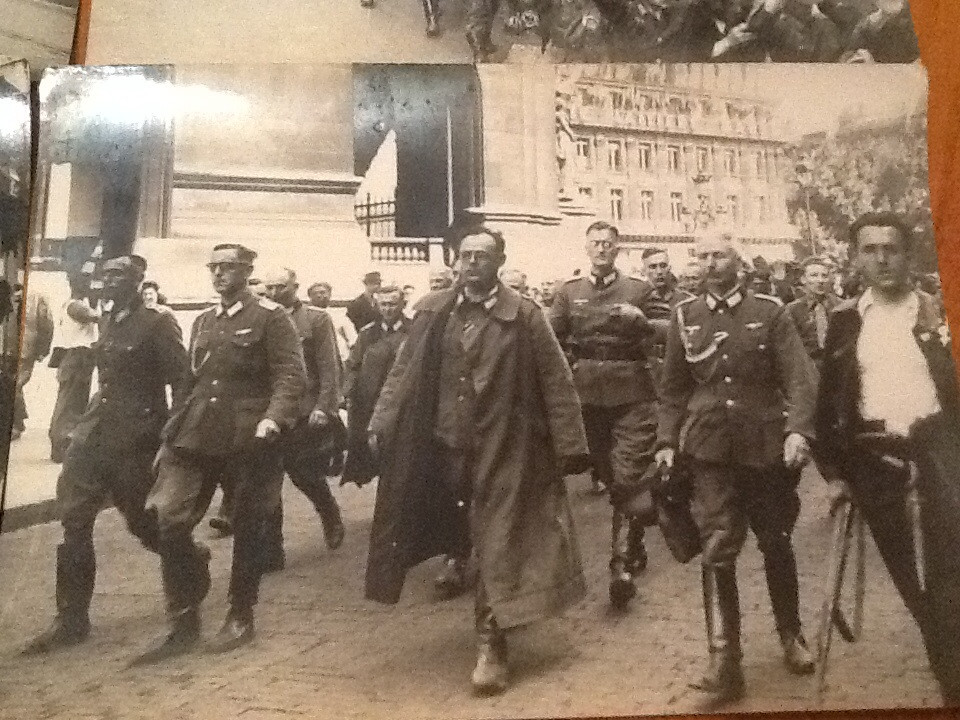 I'm afraid I cannot identify the specific officers in the photo, nor the exact date this photo was taken. However, I can provide at least one firm answer to your question. And I may be able to help "identify the scene," as you put it.

This photo was definitely taken in Paris. Specifically, on Rue Auber, adjacent to the southwest corner of the Palais Garnier. There is a link to the latest Google Streetview of this location at the end of my reply. I think you'll find the Palais Garnier hasn't changed much since 1875, althought the road and surrounding buildings certainly have.

I can perhaps offer a little more evidence that it was taken in France, and most likely in late August of 1944.

On the building on the background, I can make out the letters "te Laitiere Magot". I would speculate it says "Societe Laitiere Margot" which would roughly translate to Margot Dairy Company. But I'm not able to confirm such a company existed. In any case, Laitiere is french for creamery or dairy. Magot is a figurine of sorts from the East - probably a reference to a play that was very popular in France during that era, entitled "Les Deux Magots de la Chine".

It's extremely difficult to see in your photo, but the letters "PPF" are marked on the nearest column of the building in the foreground. This almost certainly stands for "Parti Populaire Français" or French Popular Party, which was only active from 1936 to 1945.

The German occupation authorities in Paris commandeered the Hotel Meurice as their headquarters between Septemeber 1940 and August 1944. That hotel is less than a kilometer south of Palais Garnier. So it's certainly not a stretch that the German officers depicted in this photo were being escorted away from that headquarters after Dietrich von Choltitz surrendered the German garrison to the Forces Françaises Libres (Free French Forces). That surrender occured on 25 August 1944. Most of the German staff officers, including von Choltitz, had already been transferred to Trent Park by 29 August 1944. So, I would postulate the photo was probably taken sometime between 25 August and 28 August 1944.

The Free French Forces had a mix of American, British and French made uniforms, which might explain the odd look of the rifle-carrying man on the right of the photo who appears to be escorting the German officers. It's equally possible he was a part of the French Resistance (a.k.a soldiers without uniforms) - many of whom were recruited into the Free French Forces in the 1940's.

This is a photo of the German General Staff taken prisoner during the liberation of Paris in late August 1944. German General Dietrich von Choltitz disobeyed Hitler's order to level the city due to his affection towards the French city. Choltitz surrendered his 17,000 man army to the Allies on August 25, 1944. Therefore, it is probable that Choltitz in not in this photo because he was in captivity already in Trent Park.

I'm still trying to find the actual officers in this photo by going through the officers of the 325 Security Division that was in Paris August 1944. (Or other German officers in Paris at this time. I'm going to have to go through books in order to find out.)

7
Why the USSR insisted on ban of the 1943 German film Munchhausen in Nuremberg?
3
What were the German "general" ranks in World War II?
11
Has this newspaper printed the wrong picture (as well as a baffling caption)?
11
Luftwaffe Operations from Syria/Iraq in 1942
8
Was von Manstein's Lack of Success at Leningrad (and later Stalingrad) due to the failure of German military intelligence?
8
Are there any accounts of German junior enlisted soldiers surviving the siege of Stalingrad and subsequent captivity?
9
What did this WWII combat medic insignia represent?
1
Identify Helmet (possibly WW2 British)
6
What were officers' casualty rates among the major powers of WWII?
23
Who was the most successful German spy against Great Britain in WWII, from the contemporary German perspective?