What made Alexander great?

Historians have titled Alexander III of Macedon "the Great". In a very short period of time he conquered one of the largest empires in ancient history and was undefeated in battle.

What I'd like to know is, what factor more than any other made it possible for Alexander to achieve this?

Military historians typically focus on his battle tactics and strategies. Certainly those were remarkable and proven effective, but was that it? The Macedonian army he inherited was quite skilled; would Alexander have achieved the same given any other army in the ancient world? Would he have been equally effective against another ancient army, or were the particular opponents he faced particularly vulnerable to defeat?

I know there's probably no single answer, and it may well be a combination of factors, but I'd like to hear different theories.

If Alexander was given another army and enough time to figure out the strengths and weaknesses, he probably could have taken over some states. However, because politics and geography where different, he would probably not be as great. Alexander and Macedon were a state in northern Greece, who for much of its early history, was peaceful. This left The southern Greek states unaware and unprepared for the attacks from Macedon. If Alexander was king of Athens, he might not have been as successful since all he would have had was an unprofessional army and the Peloponnese League ready to pounce on him.

It also helped Alexander that to the east, the only real enemies he faced were the Persians. By this I don't mean that the Persians where incompetent, but rather, the Macedonian army only had to adapt tactics to fight one army. They didn't have to face the Carthegenians, the Gauls, the Greeks, and the Germanic tribes at the same time (Rome). Alexander's armies used the pike successfully against the Persians. The Persians were unable to adapt to the new weapon, and so, Alexander was able to defeat them.

When Alexander faced the Indians, he had less success because he had to form new tactics to fight them. He was repeatedly crushed by the elephant until he found how cowardly the elephants were and had them run and trample the Indian lines. He also found that India's dampness really didn't suit the metal armor and arms of his Phalanx. They all rusted.

Moving on to politics: if Alexander had been made a Roman general, he would face less success. In Rome, the generals' powers were quite limited, and were always fighting for power with the senate. When a general became popular, grew his army too large, or went too far away from Rome to be governed by the senate, the senate tended to take actions to limit his power. (Think back to Caesar) With this constant power struggle, it is doubtful that Alexander would have been so great.

The Greeks had demonstrated military superiority over the Persians for many years. Both Cimon and Agesilaus had led successful expeditions into Persian territory. That Persia maintained its dominant position over Greece had not so much to do with their own military capabilities, but rather because of the incessant warfare amongst Greek cities. Their focus on destroying each other drained their resources and enabled Persia to make territorial gains in exchange for money supporting one side or another in the Greek wars. Plutarch lamented that when Agesilaus met with success in Asia Minor and was intending to march on to the Persian capitals, he was instead ordered back to Sparta by the ephors to fight against other Greeks.

The Macedonia that Alexander left behind was very different to the Greek city states. Alexander did not have the restraints imposed by ephors, voters and term limits, so had much freedom in his military planning. Macedonian conquests under Philip and during Alexander's early reign set the foundations for the conquest of Persia. The subjection of their neighbours, including a weakened Greece, enabled Alexander to march without fear of suffering Agesilaus' plight. The conquered wealth, including from the gold mines of Amphipolis, could pay for a military substantially larger than that under Agesilaus while still leaving enough troops to protect the homeland. The allure of Persian treasure was also a great incentive for those in the much poorer Greece to take to arms.

I do not share Livy's assessment that Alexander would have failed against Rome. The situation of Perseus is not a valid comparison. At that time, Rome was already the dominant power of the western world while Macedonia had lost much of its power and was commanded by less capable generals. A better choice would be the example of Pyrrhus, commanding a smaller territory and fighting some 50 years later when the Romans had grown in power, who was successful in battle against the Romans but ultimately lost the war due to insufficient reserves. Alexander was better resourced and would not have had this problem. More importantly, the Romans had not in Alexander's time adopted the tactical changes that would give them superiority over phalanxes in later years, so he would also not suffer as severe losses as Pyrrhus did.

Alexander would not have been able to defeat Carthage, as that would have either required naval superiority or a massive overland march.

I voted up lins314159's answer. I would like to add a couple of things though.

The vast majority of Alexander's empire actually started his tenure as the Persian's empire. So a great deal of credit (and attention) should be paid to all the work they did to put that empire together.

However, Persia's loss of the Persian-Greek wars 100 years earlier had established that Greek arms were superior. After that, what kept the Greeks in check was mostly Greek infighting (which Persia happily subsidized). At this point, Persia's biggest nightmare would be the Greeks uniting and turning against them.

Enter Phillip of Macedon (Alexander's dad). Probably the one thing he had that nobody else in Greece had was rich silver mines in his territory. In fact, the first place he took was Amphipolis, which contained the silver mines (and some gold too). Wikipedia talks a lot about Phillips expert diplomacy and his military buildup, but both were financed with Macedonian silver. Using those resources, he slowly conquered or acquired the submission of all of Greece, save Sparta (and Crete, if it counts). 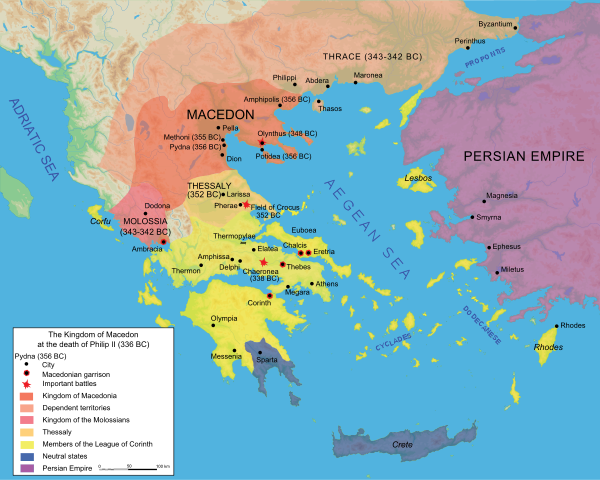 Then he was promply assasinated, leaving his heir Alexander with a huge and expensive army to feed, and the hapless Persians right next door...

Not the answer you're looking for? Browse other questions tagged warfare strategy alexander-the-great macedon hellenistic-greece or ask your own question.

22
How did Alexander III of Macedon get the title "the Great"?