In the Palestine Partition Plan, why was Jaffa allocated to the Arab state?

I'm reading through the document, "The Origins and Evolution of the Palestine Problem, Part II" by the United Nations. Under the provisions of the Palestine Resolution, they note that Palestine was partitioned into eight sections:

The territory of Palestine was divided into eight parts. Three were allotted to the Jewish state, three to the Arab state. The seventh, Jaffa, was to form an Arab enclave in Jewish territory (Annex I).

The eight part was to be Jerusalem as a corpus separatum under a special international regime... (p. 36)

However, the document makes no mention of why this seventh partition was made.

The annex refers to a partition diagram of the region of Palestine. I've copied the relevant portion of the general map here: 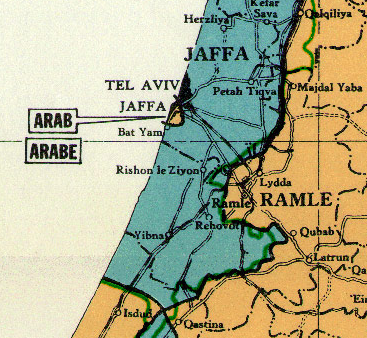 What was the motivation behind this seventh partition?

Jaffa, which has an Arab population of about 70,000, is entirely Arab except for two Jewish quarters.

Jaffa was a predominantly Arab city with a large Arab majority. Carving Jaffa out as an Arab enclave was a land-efficient way of strengthening the proportion of Jews in the proposed Jewish state. The committee feared that, when Bedouin populations were taken into account, Jews would be rendered a minority within their own state under the original partition plan.

23
Why were the British so reluctant to allow Jewish migration to Palestine?
20
What was Palestine before, if not a country?
5
What proportion of the Arab population of Palestine pre-1948 came from families that lived there before 1880?
7
What evidence is Chomsky alluding to when he states the US is preventing a settlement between Israel & Palestine?
29
Did Arab policymakers have plans for the Jewish population, in case of victory in 1948 War?
3
Why couldn't the Arabs invade Palestine before the end of the British Mandate?
2
Did the PLO coordinate with Arab armies during the Six Day War?