Did electric weapons exist in Russia in the 1920s?

Reading "The fatal eggs" by Bulgakov, I was surprised by his reference to "electric revolvers". The novel is science fiction, but it is very much Jurassic park style. It plays in contemporary (for the publication) Russia, and there is just one unusual scientific discovery which creates an apocalyptic scene.

The electric revolvers are mentioned in passing, and don't feel like a literary device of an alternate universe. They just seem a forgettable part of the scenery. As far as I can tell, no other part of the context is unusual for the times. Some things are satirically exaggerated (the professor's expectations of his students) but all other technology mentioned, with exception of the mysterious natural phenomenon at the center of the plot, feel normal for the time.

Did they have electric weapons back then? If yes, how widespread were they - just prototypes, or some exotic-but-known technology like segways today, or were they even in wider use?

I found a translation of this book online. It's a 1920s Soviet sci-fi novel about a special light that makes things grow fast. It doesn't appear to be particularly rooted in science.

Here's the two references in the text I found.

They only had one electric revolver, but it was good protection. A 1927 model, the pride of French technology for shooting at close range, could kill at a mere hundred paces, but had a range of two metres in diameter and within this range any living thing was exterminated outright. It was very hard to miss.

The electric revolver fired twice, lighting up everything around with a greenish flash, and the crocodile shuddered and stretched out rigid, letting go of Polaitis.

The way they casually talk about the gun suggests it's not a prototype, but an exported, easy to get commercial item. No, nobody had a gun then that could kill things with a two meter cone of green light, we would have heard of it.

We still don't have practical handheld energy weapons. The "rigid" effect sounds like electrocution. You could get that effect with a lethal taser, but that requires firing darts with wires into the target with a maximum range of 10m. Tasers were invented in the 70s and the 100 pace range of the electric revolver is about 75m. 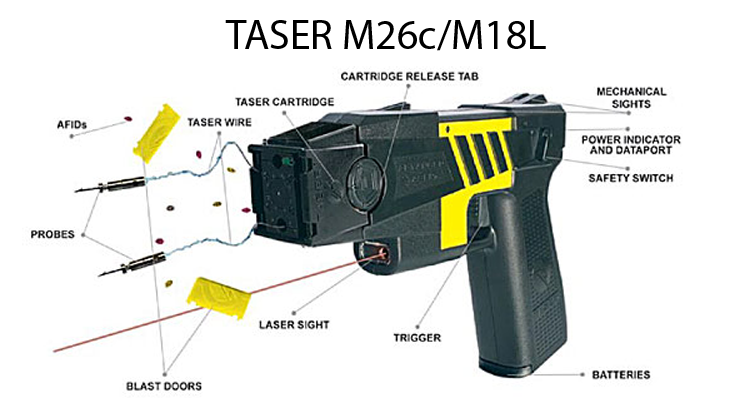 Why an "electric" revolver? Because it's cool! Cooler than just shooting a crocodile full of bullets.

Electricity was a fad in late 19th and early 20th century sci-fi similar to how DNA was a fad in the 80s, and nanotech and "quantum" in the 90s. I'm going to guess dark energy/matter are the thing now. Everything could be explained with electricity.

Why have just a gun, when you can have an electric rifle! 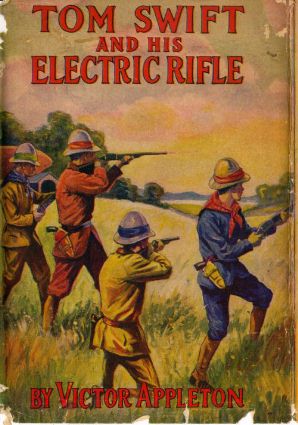 This book is from 1911, a possible source of inspiration. TASER stands for Thomas A Swift's Electric Rifle.

Of foremost notice is Swift's invention of the electric rifle, a gun which fires bolts of electricity. The electric rifle can be calibrated to different levels of range, intensity and lethality; it can shoot through solid walls without leaving a hole, and is powerful enough to kill a rampaging whale, as in their steamer trek to Africa. With the electric rifle, Tom and friends bring down elephants, rhinoceroses, and buffalo, and save their lives several times in pitched battle with the red pygmies. It also can discharge a globe of light that was described as being able to maintain itself, like ball lightning, making hunting at night much safer in the dark of Africa. In appearance, the rifle looked very much like contemporary conventional rifles.

In the years before publication "scientists" started claiming they had invented various death rays which could have been inspiration to toss one of his own in.

As for the "rays", the apparently magical properties of X-rays created a bit of a fad for inventing new rays.

The ray brought them to life. It's a new ray, never studied or even discovered by anyone before. The first thing is to find out whether it is produced only by electricity, or by the sun as well," Persikov muttered to himself.

Even legit scientists got caught up in the craze. The most famous case was the "discovery" of N-rays by the respected physicist Prosper-René Blondlot and even confirmed by others! The whole thing was found to be an enormous case of confirmation bias.

In the darkened room, Wood surreptitiously removed an essential prism from the experimental apparatus, yet the experimenters still said that they observed N rays. Wood also stealthily swapped a large file that was supposed to be giving off N rays with an inert piece of wood, yet the N rays were still "observed".

Dragging this back to history, sort of, Wikipedia says the Soviets claim to have developed a "laser" pistol and "laser" revolver in the 80s! as a weapon for their astronauts! Wow! 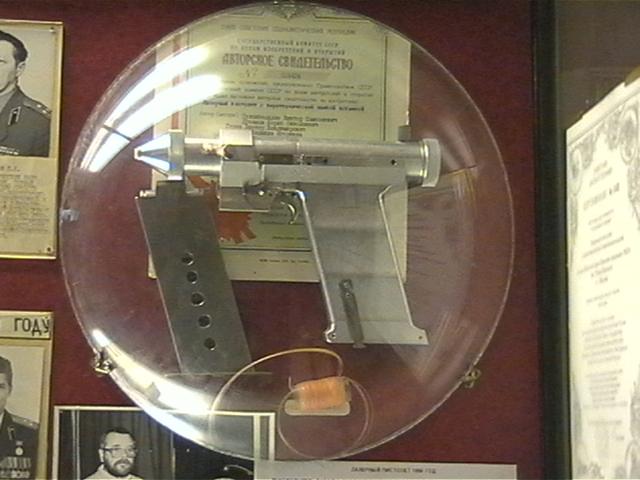 The use of a magazine like a conventional gun suggests why the "electric revolver" is a revolver. Rather than have a power pack like most sci-fi and real directed energy weapons, presumably each cylinder held its own lethal electrical charge fired in a ray out the barrel. Putting aside how they manage to focus and direct electricity over 70 meters of air (we've barely fired that out) there's the problem of packing a lethal charge which can jump that gap into a bullet sized package: basically a AA battery. If you think the battery on your cell phone sucks, imagine it with with 1920s low density battery technology that was 10 to 100 times lower than we have now.

Before you get excited, they weren't lasers. They were just a very strong camera flash in a gun form. The magazines contained disposable flash bulbs. Their intent was to disable the optics on spacecraft. 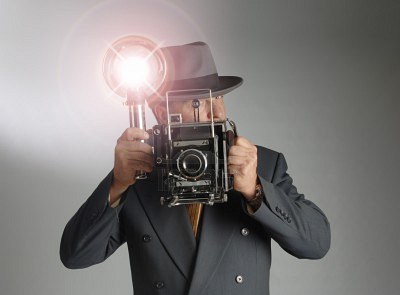 Not nearly as cool, is it?

I believe it's rather a Zeitgeist. Soviet writers in 1920s were quite ingenious in arms "development". Belyaev in "Master of the World" used powerful mental weapon, A.N.Tolstoy in "Engineer Garin's Hyperboloid" projected a kind of laser weapon and so on.

"Electric revolvers" in Bulgakov's story are much more powerful than modern samples: a multi-charged pistol capable of "killing anything alive in the circle of 2 meter in diameter" would have become a "must have" tool in modern warfare.

Not the answer you're looking for? Browse other questions tagged weapons 1920s or ask your own question.

10
What types of weapons did the British army use in the late 1890's?
13
Did Roman military require uniform weapons?
13
Where did the French revolutionists get their weapons?
8
Was it common practice for men to kiss on the lips in 1920s USA?
5
Why would Japanese people be in China during the 1920s?
7
Why did Denmark, unlike in other 'rich' nations, favour agriculture in the 1920s?
17
Was the act of servicemen exchanging their weapons for enemy weapons common during WWII?
5
Did ancient Greeks harden steel weapons?
5
What did people used to exchange for goods during the 1920s German hyperinflation while the official currency was not trusted