Is there a citable reference of druids using curved swords? 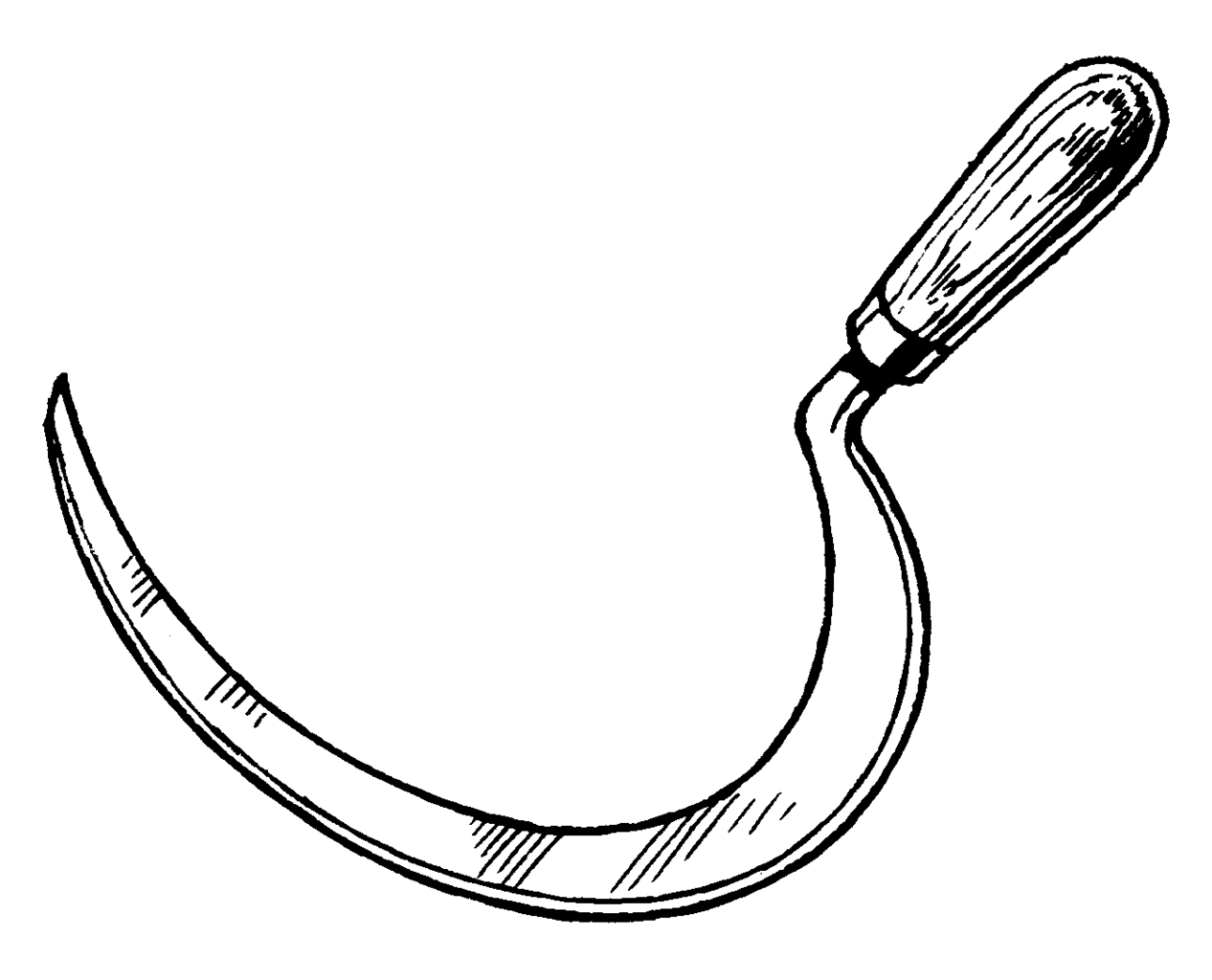 and there are curved swords (coined Falcata in the 19th century) from the pre-Roman Iberian peninsula.

Are there any references to druids actually using these curved swords? The timing and location seems plausible, but I've not found a direct reference other than those implied by games, like Dungeons & Dragons, where the druid character class (loosely based off of Celtic/Gallic historical druids) wield (rather anachronistically) scimitars 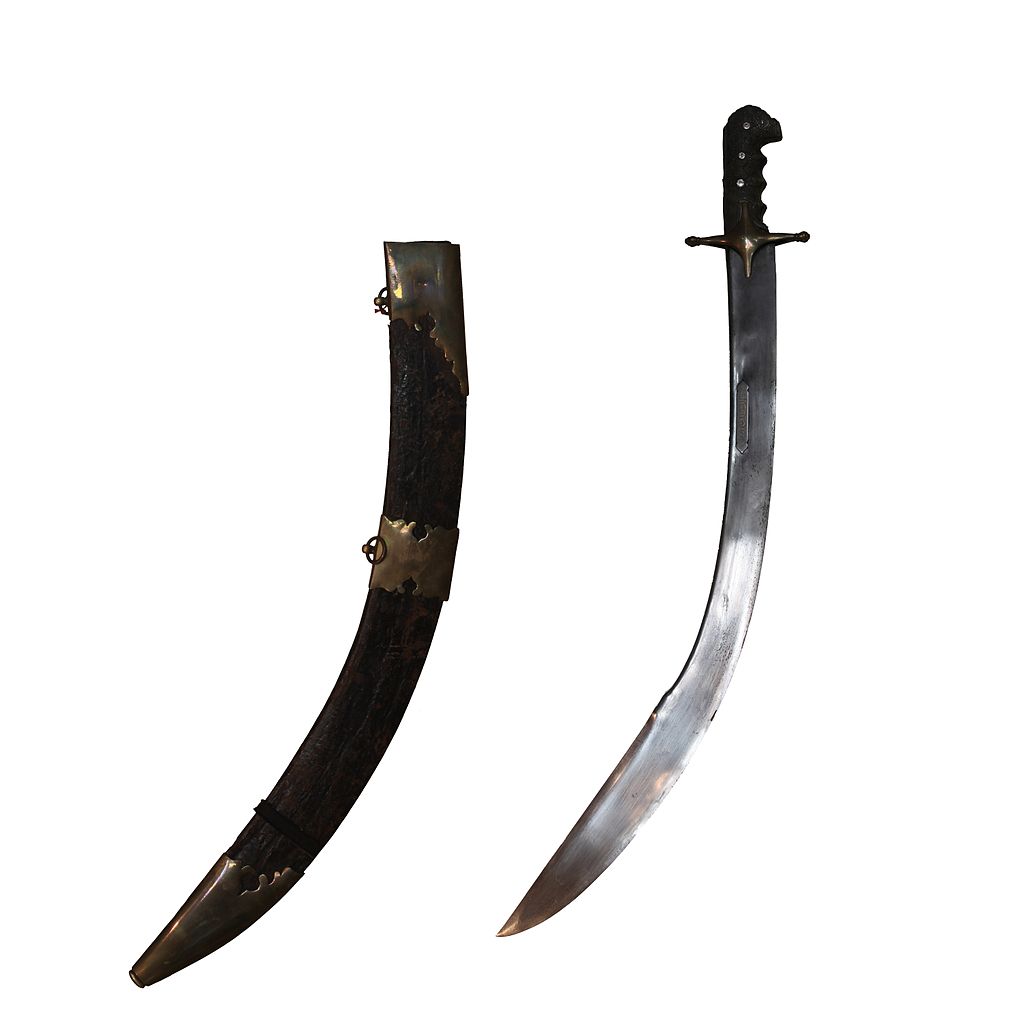 in what appears to be an effort to associate them with a curved sword.

This may be unanswerable since

"not one single artefact or image has been unearthed that can undoubtedly be connected with the ancient Druids." Hutton, Ronald (2009). Blood and Mistletoe: The History of the Druids in Britain. p. 23

I did find this, but I can't read Latin. It does however have the words, druid and machaera Hispana, the latter referred to in the article on the falcata.

Thanks to the helpful comment from @Comintern, the portion that mentions the curved sword comes back from google translate as

The reason that he was angry because he allowed himself the knowledge of the means of the old fabu- 1am and take away : * Do Thou, of course, are not the one . ' * We / I * Caesar, not to recognize me , for when this was done, I was a whole . Afterwards it belonged to me, the eye in the battle of Munda, 5 , torn out , and at the head of some bones . Nor helmet if seem to recognize that . Spain is divided saber / He forbade her performances Caesar and business fields in which viripotens the cause of strife and lawsuits had been a soldier in his favor.

and the portion that mentions druids

The Germans differ much from these usages, of safety. for 20 they have neither Druids to preside over those who the things of God , nor

But there is no clear correlation between the two, nor is the translation clear enough to provide any insight.

I also found this 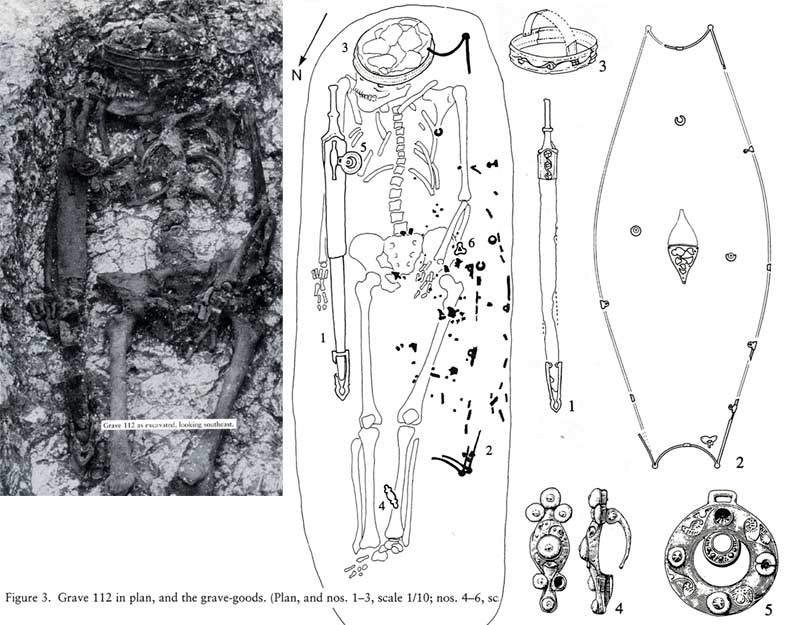 from the Deal Warrior find, but the sword is not curved, nor does it have the characteristic hilt of the Iberian curved sword.

A contemporary reference is Pliny the Elder's account of the ritual of the oak and the mistletoe, wherein a ritual sacrifice of cattle and vegetation is conducted with a sickle.

Historically, farm implements have been a first go-to weapon option for the common folk of every continent. The sickle is no exception.

Druids were part of the elite but were not typically warriors. The Deal warrior mentioned above is suggested as a Druid as the crown has been posited as a Druidic headdress and has been compared to the Roman apex worn by flamens. 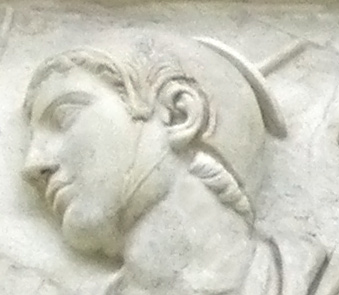 In the image above the apex is the disc with spike (piece of olive branch).

There is a partial crown of similar type from Roseldorf in Austria which was found in a sanctuary along with cult items like antlers that had been modified to fit into a cult statue. Sword fittings and horse bits were also found so it can't be ruled out that the crown had no religious significance.

The Deal crown was worn bare, at least for burial, as traces of hair were found on the inside of the metal bands so it had no defensive purpose. As druids were from the noble class it makes sense they were buried with status symbols like swords, we can't know for sure. The Cavenham crowns which date to the middle of the Roman occupation are thought to be Romano-British religious headdresses. 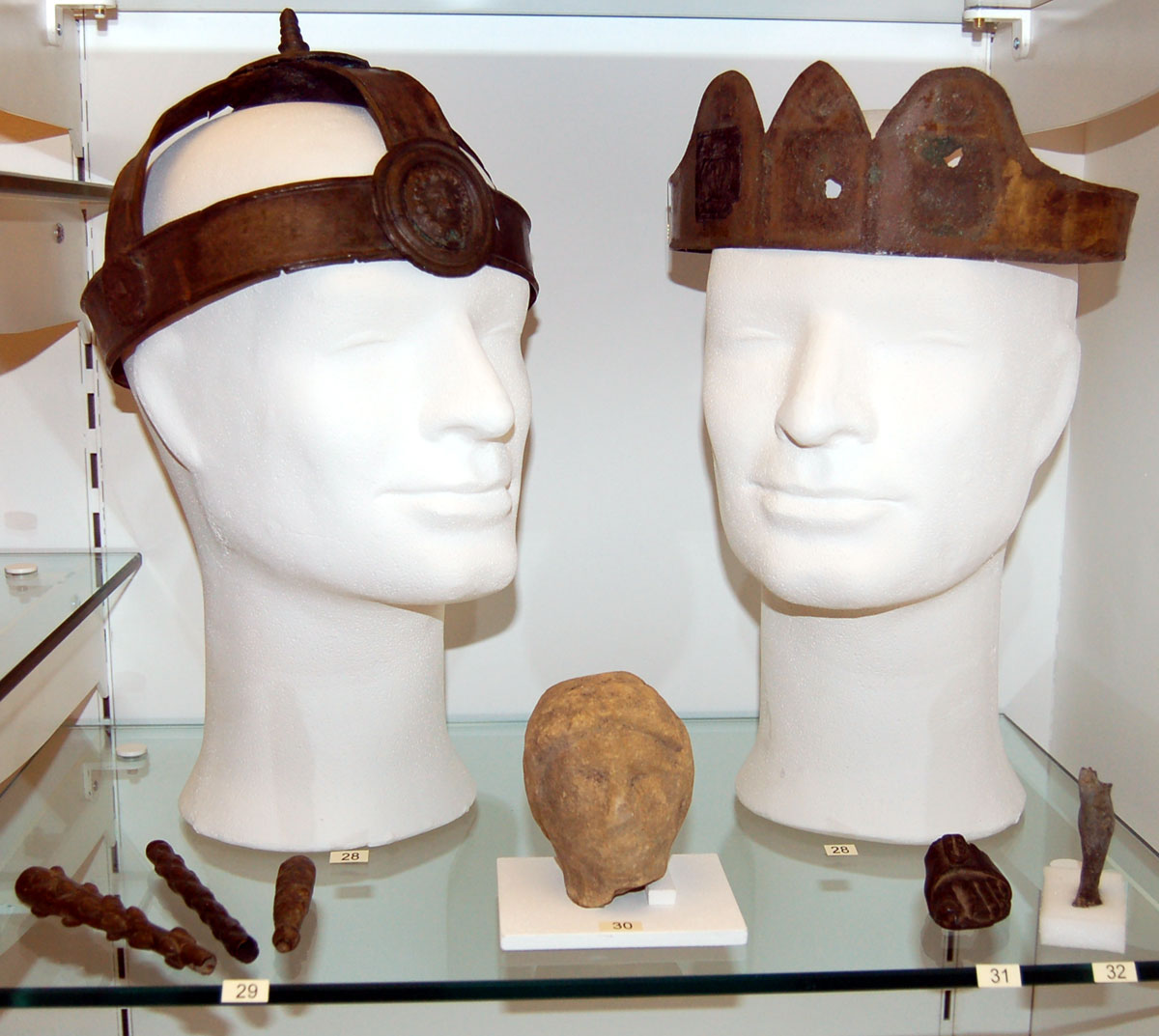 The one of the left is similar to the "Druid" crowns and appears to incorporate an apex on top lending credence to the idea that the crown of the Deal Warrior is religious in nature.

But the question was whether Druids would have used curved swords. The standard la tene blades were straight, curved swords did exist in the Celtic world. There is the falcata from Spain and the Sica/Machaira type swords (which the falcata likely share ancestry with) from the Balkans, neither place which has furnished much if any evidence for Druids.

If the Deal Warrior is actually a Druid then it's possible evidence that they wore swords. If there was a prohibition of them having weapons then nobility aside I find it doubtful that such an anathema object would be included in the grave. So if we allow for druids and swords and assume that druids existed in all parts of the Celtic realm (something which is not certain) then eastern Celts could have had druids with curved swords like this: 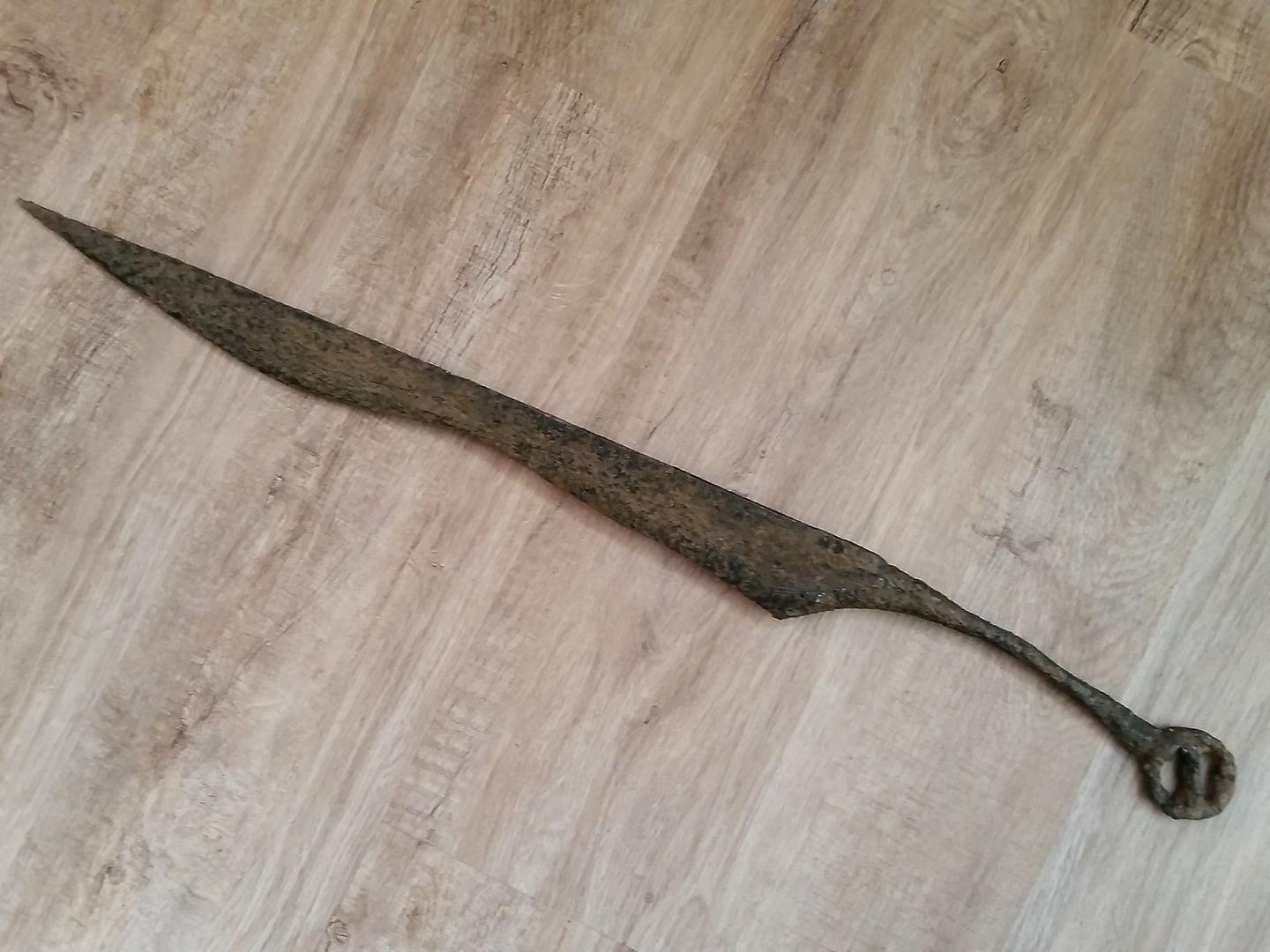 Not the answer you're looking for? Browse other questions tagged sword celts or ask your own question.

53
When were swords last used in European warfare?
8
In Studying the peoples of pre-Roman Britain, what are our primary reference sources?
14
Are the swords in the Oath of Horatii all Roman?
6
When did cavalry soldiers unsheathe swords?
11
Why were swords used in battle?
6
Did Celtic druids teach in Greece?
5
Can anyone identify these swords with carved ivory grip and narrow guard