What are the origins of the "News Reel Voice"?

A commercial came on the radio last night while I was driving home that was a spoof on the old news reels of the 30s and 40s. And, being radio, the spoof was entirely centered on the iconic 'voice' of those old news reals...quick talking with an inflection unique enough that when you hear it you immediately think "ah, news reels!"

That got me wondering what the history of that voice is. Did news reels typically sound like that? Or is that a stereotype that, overtime, has become emblematic of those reels even if not entirely accurate? If news reels did sound like that, was that a general style adopted by narrators, or was it something that came from one prominent/prolific narrator in particular?

If you look through old newsreels on YouTube, they definitely do not all share that iconic narration voice, so I'm assuming this was a fabrication at some point in time.

(PS, I wasn't sure which site to post this on...perhaps this would be better asked on Moviews/TV?)

Trying to find some specific examples. The one I heard on the radio was actually a Geico commercial. But can't find that.

The Legend of Korra uses this stereotypical news reel voice as a recap for each episode. You can see an example here: https://www.youtube.com/watch?v=bigqWlscHYc It's not quite as over-the-top as you find in more satirical uses but seems to be fairly consistent with the style elsewhere.

If I had to describe the style I'd say it's"

It wasn't just the newsreels. The ultra-fast talking high-pitched (and almost rhythmic) voice was actually common in media of that era. For example, here's the final scene from Casablanca in 1942. By modern standards, it sounds like a lot of bursts of rapid-fire dialog, interspersed by pauses for you to mentally catch your breath and process what you just heard. Dialog bits from Dragnet are also famous for this, particularly when interrogating suspects.

Another thing one may notice is that women are typically portrayed speaking much slower (as are the aforementioned Dragnet interrogation subjects). This is a big clue. Dialog speed was used as a marker for dispassionate intelligence. People talking slower and lower were indicating that they were being more emotional and/or not thinking clearly.

A great illustration of this is this other classic Cassablanca scene. Look away from the screen, and pay attention to how fast and low the actors (particularly Ingrid Bergman) speak depending on who they are speaking to and how emotional they are about what they are saying (or how emotional they are trying to be). For instance, whenever anyone is talking about the sentimental song, their voice gets lower and slower. In contrast, when her husband and the Chief show up, both Bergman and Bogart start talking much quicker and higher.

To the best of my knowledge, the only person who has looked at this effect from a historical perspective is Maria DiBattista in her book Fast Talking Dames. "Fast Talking" in this context is explained to be an indicator of intelligence and power.

As for the unusual accent you are hearing, CGCambell in the comments pointed out that this would have been the "Transatlantic" accent. It was common among the upper class in New York around the turn of the 20th century. Since those were the people who patronized the theater, it was common there as well. When the first media companies started up in New York, they tended to pick it up, as it was a much more "prestigious" accent than the other locally-available alternatives. This was the accent of the late George Plimpton and William F. Buckley Jr.

It started to wane after the movie companies moved out to California and much of television production followed. Today most of the accents you hear in American media are a kind of homogenized American Midlands (which many Americans consider "no accent"), with a smattering of weak AAVE used to indicate someone from a rougher background.

Please see the following list, also on WikiPedia, along with A Bijou Flashback: The History of Movie Newsreels.

These newsreels were produced by each of the major film corporations between the late 20's to the early 60's. Each Corporation used a different narrator. See my quoted example below, as Movietone and Universal/MGM are the most widely known. Most of them served as the current news for moviegoers, as these reels would run before the movie started, much like we get previews today. Most of them are known and archived because this was a major method of news that IMO reached it's prominence during WWII, as moviegoers would attend movies to check on their loved ones on the front. These reels also provided pictures from the front, which was quite a deal back then.

Notice the ad in the lower right of this movie trailer, indicating that the theater would show the newsreel before the movie for the price of your ticket.

Fox's first use of recording a news event was on May 20, 1927: Charles Lindbergh's take-off from Roosevelt Field for his historic solo flight across the Atlantic Ocean was filmed with sound and shown in a New York theater that same night, inspiring Fox to create Movietone News. A regular narrator of the newsreels was broadcaster/journalist Lowell Thomas.

In Australia, Movietone and Cinesound were competitors for newsreel coverage, but have now combined under the Movietone News name.

Lowell Thomas, the voice of Movietone news made himself and fellow journalist TE Lawrence famous when he visited the Western Front during WWI. TE Lawrence is best known for the book and the later adaption into a movie Lawrence of Arabia

Ed Herlihy, the voice of Universal/MGM. He narrated most of the reels dealing with WWII. These are some of my favorites as he perfectly puts emotion into the attack on Pearl Harbor, and later the death of President Roosevelt. Later in life he served as the voiceover in commercials for Kraft Foods.

Update as per Comments

There is no iconic voice nowadays. The audio for a radio commercial/TV Spot is made by standing in front of a microphone and recording a voice, and then adding the voice track to the rest of the audio. The inflections etc that you here come from someone's actual voice, and with the advent of television, the announcer you heard probably works for a major network, unless the commercial you heard was local only to your area, i.e. not a national campaign.

The example you gave points to J.K. Simmons, as Tenzin, who I know as the voice of The University of Farmers - National Ad Campaign. His degree in Music, and a stint on Broadway most likely are where the roots for that voice inflection come in. As I said earlier, each example you give me will end up being attributed to a person, most likely with a degree in the stage acting, acting, or music arenas. Note that most people who do this for a living have had years of practice. As such, the only way to answer your question is to tell you there are no origins, just highly skilled people.

On that same note, I present Johnny Bravo, a.k.a. Jeff Bennett: 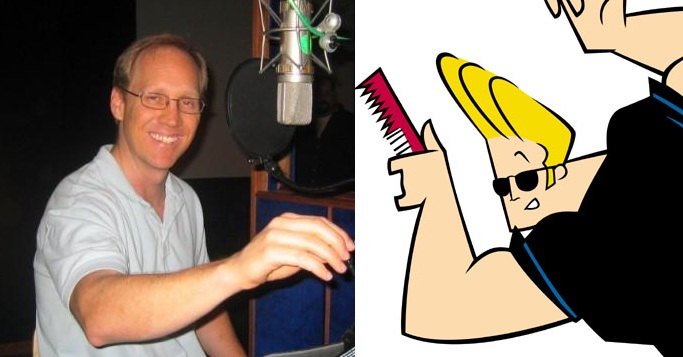 I am Cam Cornelius and I can assure you that I did not originate this style, lol! The voice you are referring to is a style of the Mid-Atlantic accent...and yes, as a voice actor I do have opportunities to use this style for historical projects.

Here is a great article on the origins: That Weirdo Announcer-Voice Accent: Where It Came From and Why It Went Away

Cam Cornelius. https://m.youtube.com/watch?v=ZfKRKI3daoM He has that old times news voice.

Not the answer you're looking for? Browse other questions tagged media or ask your own question.

11
What were the Government Press Prosecutions of 1858 and why did they occur?
10
What role did the media have in the outcome of the "Arab Spring" revolt in Tunisia?
6
What access did people in the Warsaw pact countries have to Western television and radio?
45
(Why) are there two different versions of the photograph of inmates at the Buchenwald concentration camp?