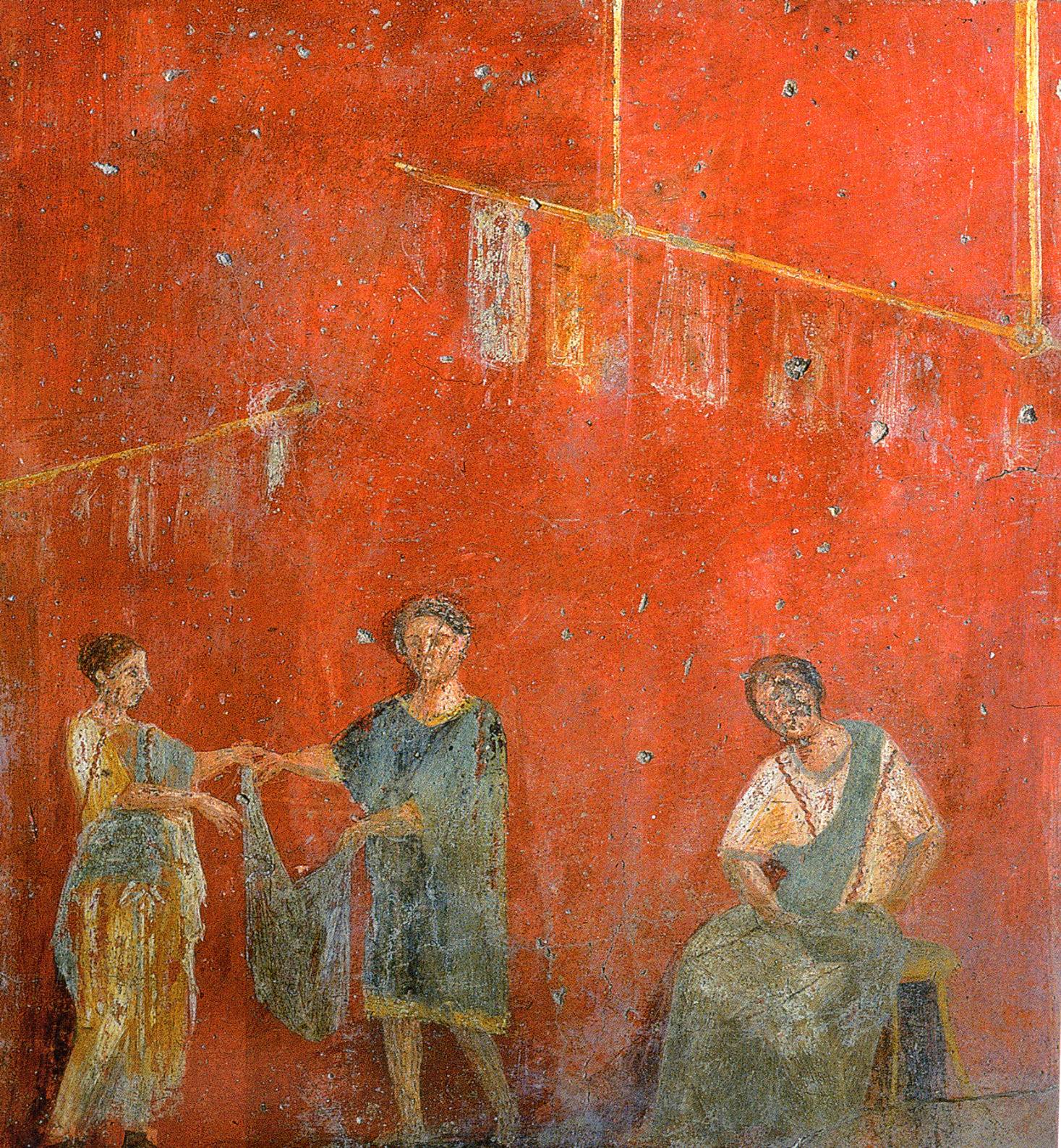 I'll bet there were as many fashion-minded people in Ancient Rome as there are today in London, Milan, New York, and Paris.

I know what a toga is. I'm also familiar with what tunics, stolas, and sandals looked like. What else, though? I'm stumped. What did fashionable women talk about half the time? "It's all the rage. I just got mine from Greece." What did she get?

Where there any special types of clothes that people wore north of Italy? In Germania? In Britain?

What other types of garments were there besides the toga, tunic, sandals and stola?

We think that both men and women wore a loincloth called a subligaculum or subligar. These were sometimes worn by men during manual labor and by upper-class men during exercise.

Women often wore a leather or cloth band to support the breasts called a strophium or mamillare.

For footwear as you mentioned, sandals were worn and for the most part the only distinction in status was in color, in which upper-class men often wore red sandals to denote their status as a patrician.

The tunic was the primary upper-body garment for men of all classes. Like sandals, class distinctions were noted with various colors and thicknesses of said colors.

The toga was a special upper-body clothing for Roman citizens, which like the Tunic and the sandals had many varieties that distinguished by both class and age. To quote from the VRoma Project, this list of differnent togae:

For jewlery, adult male citizens were only meant to wear a ring for the stamping of official documents, but many citizens ignored this social custom and instead wore the both this ring and other pieces of jewelry. Boys who were citizens often wore a smaller version of this in addition to their bulla.

Roman women would often where a peplos which would be two pieces of cloth sewn together that when buttoned at the shoulders would form a sleeveless dress.

A more common item of clothing was the chiton which was a sleeved tunic, which hung down to the ground and at sleeves which could be buttoned off at various points along the torso.

The pins and buttons described above were generally fibulae, which were simple and very similar to our modern safety pins. However, pins also came in very decorated varieties. Women also commonly wore rings and bracelets, in addition to necklaces which often were made with gold and inset pearls or other gems. Armbands were also popular.

Not the answer you're looking for? Browse other questions tagged ancient-history ancient-rome or ask your own question.

21
Did Ancient Roman insulae reach more than 10 storeys?
87
How did people distinguish slaves from free people in Ancient Rome?
6
How do I differentiate ancient ceramic from today's junk?
2
Rules to correctly write an ancient Roman date
2
Ancient Greek or Roman Teenaged Suicide for Glory
3
Sourced List of Ancient Roman Values
21
How did Christianity replace Roman Paganism and other ancient religions?
35
What is the difference between the Ancient Greek religion and the Ancient Roman religion?
23
Are there historical texts in England querying where Roman structures came from?