Why does the Ħaġar Qim seem to have drilled holes / pitted dots on its stoneworks?

Does anyone have any idea or knowledge why Neolithic temple stones have these small holes? They are facing the sun, and the other side of the stones is flat. Smaller object were drilled all over, not just on one side. I saw these in Ħaġar Qim, Malta: 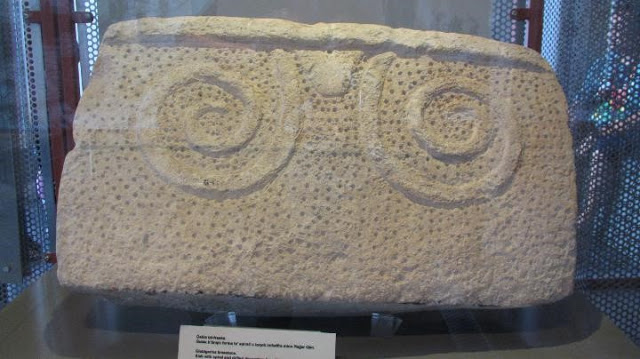 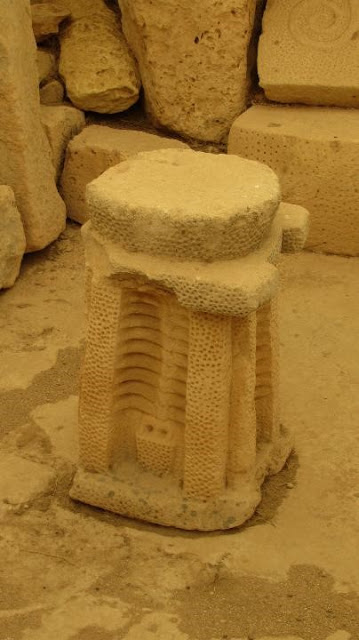 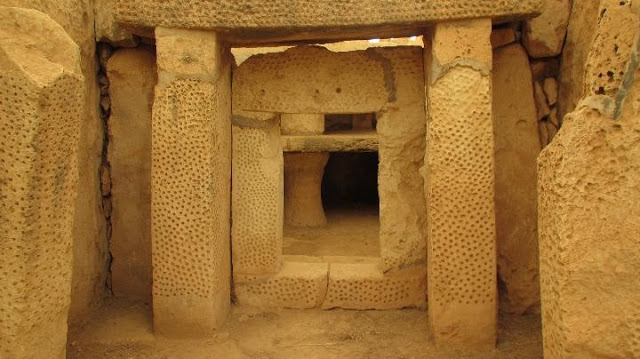 Such stippling is a common feature at prehistoric Maltese sites. They are often considered a primitive decorative pattern - somewhat of a forerunner of a modern art form.

It is the best preserved of all the Maltese temples ... The two left-hand lobed chambers are linked by a trilith niche of stones decorated by stippling; the inner of these two chambers is subdivided and in it stands two betyls, or pillar altars.

- Service, Alastair and Bradbery, Jean. Megaliths and Their Mysteries: A Guide to the Standing Stones of Europe. MacMillan Publishing Co.: New York. 1979

The device of stippling the background with an infinitude of tiny hammer-pick holes exquisitely sets off the boldly rounded curves that seem to have been a happy obsession with these artist-masons.

However there is no real way to be sure about their purpose. Some suggests, for instance, that a row of the dots counted the number of days between equinoxes.

It is a decorative pattern. Artists call this kind of stippled background pattern a ground. In Japan it is known as nanako, which means fish eggs. The purpose is to set off and accentuate the primary design.

Not the answer you're looking for? Browse other questions tagged archaeology prehistory building malta or ask your own question.

14
Why do people still leave flowers at the Temple of Julius Caesar?
28
Why were there no agricultural, city-state forming civilizations in the Ice Age?
29
Anyone know what this stone building is?
16
Were there any Roman villas in Britain which were used rather than destroyed after the Romans left?
7
Formation of underground layers of Rome
2
Troy: How could a city be built on top of an older one?