Did Jiang Baili receive a sword from Emperor Meiji for graduating first of his class?

Jiang Baili was a famous Chinese military trainer who attended the Imperial Japanese Army Academy. Some sources, including the Wikipedia article, claims that he graduated top of the class and that this requires the Japanese Emperor to award him with a sword. The Wikipedia article references the book Studying the Enemy: Japan Hands in Republican China and Their Quest for National Identity, 1925-1945 (East Asia: History, Politics, Sociology and Culture) by Christiane I. Reinhold. The exact passage is available in Google Books, but is a bit thin on details:

Upon graduation, Jiang stayed in Japan and was admitted to the Seijo Gakko, the Japanese army preparatory school; and in 1904, sponsored by Liang Qichao, Jiang enrolled in the Shikan Gakko, the Japanese military academy. During his student days, Jiang Baili joined Chinese revolutionary circles in Japan, organized with his fellow students from Zhejiang province, and became a member of the Tongmenghui.

In 1905, Jiang Baili graduated first of his class, much to the chagrin of the Japanese that a Chinese would beat out the Japanese competition. Even more infuriating was that the graduation ceremonies demanded that the Japanese Emperor would honor the best student by personally handing him a sword.

Other books also mention this, including other claims like administrators reorganising the class structure so that they won't have to award the sword to a foreigner.

But I've also read that there's no such rule for awarding swords, and that this rule actually existed at the Army War College, which was much more prestigious, requiring students to be previous graduates at the Imperial Japanese Army Academy, plus also two to six years' field experience as lieutenant in the Japanese military, and that the top six graduates from each year would receive a sword from the Emperor. It would be highly improbable for any foreigner to have such experience.

So did Jiang Baili actually receive a sword, or was supposed to receive a sword? Did the Imperial Japanese Army Academy have such a rule for giving out swords?

No, this story is assuredly bogus.

First of all, there is no evidence that Jiang Baili graduated with the highest score. The Imperial Japanese Army Academy held two graduations in 1905: the 17th and 18th classes. See the following table of top graduates, between 1902 and 1907 for good measure. 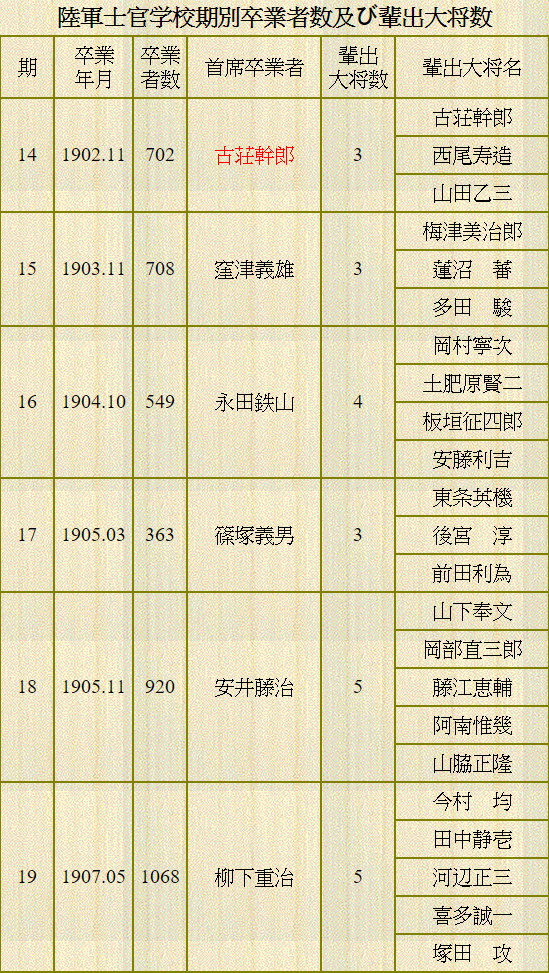 As you can see, the top graduating student from the 17th class was Shinoduka Yoshio 篠塚義男, and from the 18th, Yasui Toushi 安井藤治. Neither of them resemble Jiang Baili much. Even if we account for the possibility that the dating was off, he is simply nowhere to be found in either the preceding or subsequent years.

Since Jiang was apparently not the top graduate, the story that he received a sword for being the best pupil is clearly wrong.

That said, it is true that Imperial Japan honoured top graduates with royal gifts. However, such gifts were never exclusively swords. The Army War College used binoculars in its early years, for instance. Likewise, the Army Academy in fact awarded silver pocket watches.

【銀時計】東京帝国大学及び陸、海軍士官学校の卒業式で、天皇から優等生に賜る記念の銀側の時計。この慣行は一八九九年から一九一八年まで行われた。
Silver Pocket Watch A commemorative watch rewarded by the Emperor to top students in the graduation ceremonies of the Tokyo Imperial University and the Army and Navy Academies. In effect between 1899 and 1918.

Note also that multiple graduates receives the gift in each year. The Army War College for example awarded the top six graduates of each class. Similarly, at the Army Academy,

例えば明治三十二年の十一月に士官学校を卒業した第十一期生から大正七年五月に卒業した第三十期生までを見ると、卒業者総数一万三三〇九名のうち、傻等卒業生、いわゆる恩賜組は一八五名、卒業者数の一.五パ—セントにすぎない。
For example, there is a total of 13,309 Army Academy graduates from the 11th class in November Meiji 32 up till the 30th class in May Taisho 7. Of these, the high achievers who received royal honours numbered 185 - less than 1.5%.

Thus while still rather exclusive, the royal gifts were by no means restricted to only the top student. Theoretically speaking, it is potentially possible that Jiang Baili received a gift for being one of the best (but not the best) students. However, that still does not square with the fact that the Army Academy gave out silver pocket watches, not swords as the story claims.

In conclusion, just about every relevant detail in the supposed event is contradicted by facts.

Not the answer you're looking for? Browse other questions tagged 20th-century military japan china or ask your own question.

11
When has serious unemployment among educated young populations not led to revolution or war?
3
Why were the 8th Route Army better at fighting the Japanese than the Nationalists were?
6
Did Mao Zedong and Chinese communists collude with the Japanese during the Sino-Japanese War?
10
Why were so few Koreans enlisted in the Japanese Army before conscription was introduced in 1944?
2
How frequently did the KMT use telegrams to communicate; from where (roughly) and to whom?
14
How many pens were used by MacArthur to end the final chapter of World War II and where are they now?
5
How was the term "Mandate of Heaven" used during the rise and fall of Chinese dynasties?
1
Could Japan buy natural resources from European colonies before WW2?