Why were Morocco and Tunisia made a French protectorate, but Algeria annexed as part of France?

This question is somewhat related to this one.

The three maghreban countries of Morocco, Algeria and Tunisia are almost like three sisters and share everything in common culturally and historically. All three were conquered by France in the 19th century.

However, while Morocco and Tunisia were made French protectorates and considered colonies, Algeria was annexed and considered to be part of France proper until 1962, and that even though Algeria was separated from france since the fall of the Western Roman Empire in 476, and is connected to France only by sea. Why did the French make such a difference?

One of the main differences between Algeria and other Maghreb countries controlled by France was the extensive settlements established there. European settlers began arriving immediately after the capture of Algeria in 1830.

These settlers were encouraged by the colonial policy which makes it easy for them to massively "buy" Algerian lands at the expense of the native population. Later a set of laws (Code de l'indigénat) was codified to create an inferior legal status for the natives and give even more special status to the colonists. 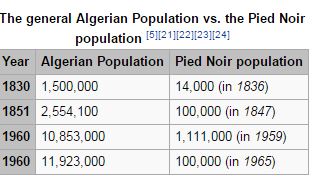 As for why Algeria had more settler population than the other colonies, a possible simple reason (highlighted by Medi Saif in the comments of this answer) might be that it was the first to be controlled by France. Algeria was captured in 1830, while Tunisia was captured in 1881 and Morocco became a French protectorate only in 1912.

So, the initial settlement of Algeria by the Europeans encouraged higher degree of integration with France (including annexation) and favorable laws to French citizens, and in turn all these things encouraged even more settlement to Algeria. I hope this answer your question.

Timing was a major factor.

The French invasion of Algeria in 1830 (with the excuse that the Dey had touched the French consul with a fan) was in a period shortly after the Napoleonic wars when conquest was seen as an acceptable method of acquiring territory.

By 1880, the Scramble for Africa had led to the development of some forms of rules for civilised behaviour in imperialism. More significantly, in the Tunisian case Italy (with its eye on Libya) objected to French expansion, while in the Moroccan case Spain (with its eye on the north coast) and later Germany objected to French expansion. The desire to avoid European wars lead to a more moderate façade of colonial protection rather than annexation.

Not the answer you're looking for? Browse other questions tagged france colonization north-africa or ask your own question.

14
Why did France put so many resources into fighting Algeria in comparison to its other former colonial holdings?
12
Why did Algeria, Morocco and Tunisia remain loyal to France during and after World War II?

14
Why did France put so many resources into fighting Algeria in comparison to its other former colonial holdings?
9
Why the six hour gap between British and French declarations of war?
12
Why did Algeria, Morocco and Tunisia remain loyal to France during and after World War II?
61
Why are the German and French languages so different?
8
What were the major imports and exports of Germany and France from 1850-1915?
7
What were French collaborators specifically accused of after the Liberation of France in WWII?