Was Germany's "Fall Blau" plan in the Soviet Union partly aimed at Mediterranean neutrals or Japan (a neutral vis-vis the Soviets)?

In 1942, Germany adopted Fall Blau, a plan for a southward push in the Soviet Union toward the Caucasus, and the borders of Turkey and Iran. (Stalingrad was added to the plan later.)

Germany has put her all in the mortal battle with Russia. Her success or failure will determine the attitude and relations with all the neutral countries.

The Japanese then speculate that with the "neutrals" and the non-Russian Soviet Union under their belt, the Axis could make peace with "Russia," and limit the war to one against Britain and the United States.

Did other diplomats and politicians contemporaneously, or historians retroactively, make the case that the prioritization of "economic" rather than "political" objectives in the Soviet Union (such as Moscow), was actually aimed at winning over neutral nations in the Mediterranean region?

Let's address the question based on literal reading of the primary source - Weisung Nr.41 (in English)

As soon as the weather and the state of the terrain allows, we must seize the initiative again, and through the superiority of German leadership and the German soldier force our will upon the enemy.

Our aim is to wipe out the entire defence potential remaining to the Soviets, and to cut them off, as far as possible, from their most important centres of war industry.

First, therefore, all available forces will be concentrated on the main operations in the southern sector, with the aim of destroying the enemy before the Don River, in order to secure the Caucasian oilfields and the passes through the Caucasus Mountains themselves.

Should opportunities arise during these operations, particularly by the capture of undemolished bridges, to establish bridgeheads to the east or south of the Don River, advantage will be taken of them. In any event, every effort will be made to reach Stalingrad itself, or at least to bring the city under fire from heavy artillery so that it may no longer be of any use as an industrial or communications centre.

It is obvious that the logic of the document taken literally is quite sound:

The key point here is that it was not possible to predict any of these eventualities with any military-grade certainty. It wasn't even necessary to do so - the victory in the South opened up German decision space immensely and put the Allies into a tight spot.

After the question was edited I went back to another primary source (Franz Halder's war journal), namely his rendition of main points of Hitler's speech at March 28, 1942 planning meeting (not verbatim):

I'd say the part of Japan (this was pre-Midway, pre-Coral Sea!) was much larger in Hitler's plans than that of Turkey. There are no other Mediterranean powers of note (if one nods at Spain and Portugal, oh puhhlease - after Adm.Canaris' shenanigans there was no way for Franco to join the fray).

While it certainly would be a pleasant side effect for Germany, I haven't seen suggestion that prioritizing the invasion of the Caucuses' primary mission was to win over neutrals.

It's a bit absurd that so much effort and manpower would be put towards wooing nations that could have been conquered or coerced with a fraction of the effort. You don't invade one of the largest and most powerful nations on Earth to win over a few neutrals. Germany had a much better opportunity to sway Middle Eastern neutrals. They ignored it.

This is evidenced by their lackluster support for the North Africa campaign. The Deutsches Afrikakorps (DAK) only ever consisted of two or three German divisions compared to the 150 committed to Operation Barbarossa. When the DAK was sent to Africa, Germany was already secretly planning their invasion of the USSR.

After the fall of Greece, and the diversion of British forces there, Egypt was open to a German invasion. If Germany had given North Africa higher priority then Malta would have been invaded or suppressed to secure their supply lines. Sending and supplying even a single extra Panzer division would have turned the tide. The DAK, now well supplied and reinforced, could have invaded Egypt, captured the Suez Canal and pressed into the Middle East. The combination of the DAK, support from Vichy colonies, and an Iraqi revolt would likely have allowed Germany to conquer British territory there.

Neutral Turkey would now be caught between Axis controlled Greece, Bulgaria, and Iraq; Vichy Syria; an Axis leaning Iran; and the Soviet Union. With no hope of Allied help, and after seeing where Allied assistance got Greece, they could have joined the Axis or Germany could violate their neutrality to invade the Caucuses by a more direct route.

"The enemy forces which are still west of the Dnieper must be decisively defeated and dispersed. As soon as the state of operations and supplies allows, First and Second Panzer Groups will be concentrated under command of Fourth Panzer Army and, with the support of infantry and mounted divisions, will occupy the Kharkov industrial area and thrust forward across the Don to Caucasia."

So German plans for operations in the Caucasus and Middle East clearly predate Japan's entry into the war, but there can be no doubt that in addition to the obvious economic importance of the move, there was anticipation of diplomatic benefits as well. After Japan's entry into the war Hitler saw this strategy as one which was in accord with his ideas for greater co-operation between the Axis powers. 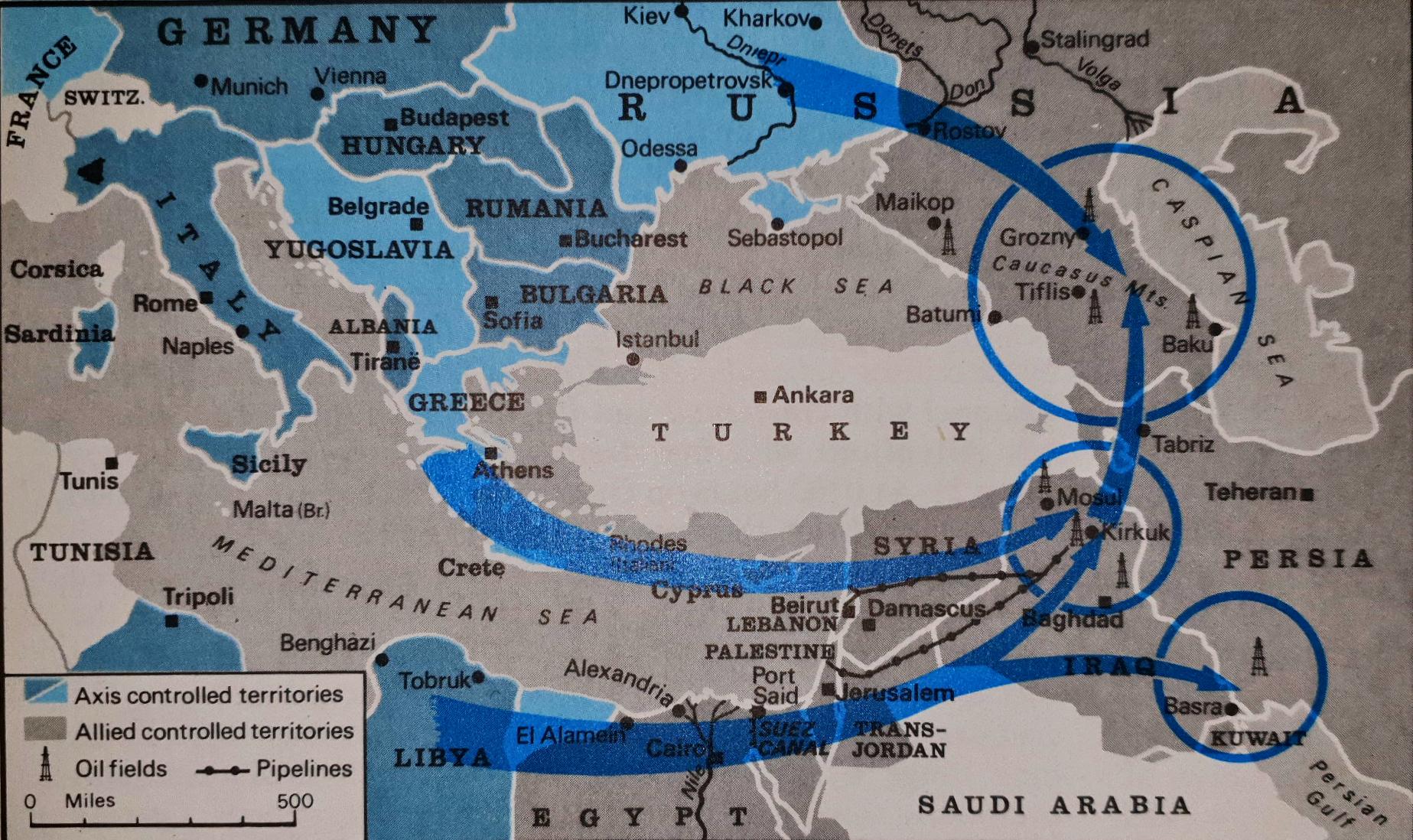 On 3 January 1942, Hitler met the Japanese ambassador, Oshima, to discuss his future plans and co-operation between the two powers. Specific links were made between the intended German strategy and possible political ramifications in the Arab world, as well as broader mention of shared German and Japanese strategic interests in the fate of Russia and India. A German observer of Hitler's meeting with Oshima noted:

...For the time being he did not intend to carry out any more attacks in the centre of the front. His goal was an offensive on the southern front. Picking up the thread of his argument again, the Fuhrer declared that he was determined to take up once again the offensive in the direction of the Caucasus as soon as the weather was favourable. The thrust in this direction was the most important one: we must get to the oil and to Iran and Iraq. Once we were there, he hoped that we could get help to unleash the freedon movement of the Arab world. Naturally, in addition, he would do everything possible to destroy Moscow and Leningrad.

...All of us and Japan as well were engaged in a joint life and death struggle and so it was vital that we share our military experience. ...[Hitler then] emphasized that it was probably the first time in history that two such powerful military powers, which were so far apart from one another, stood together in battle. Provided their military operations were co-ordinated, this offered the possibility of creating leverage in the conduct of the war which must have enormous effects on the enemy, since they would be thereby compelled continually to shift their centres of gravity and in this way would hopelessly fritter away their forces. He did not believe the United States would have the courage to conduct offensive operations in the East Asian sphere... the Fuhrer continued "if England loses in India a world will collapse. India is the cornerstone of the English Empire. England acquired all its wealth from India".

...The Fuhrer is of the opinion that England can be destroyed. He is not sure yet how the USA can be defeated. The South American states would, in his opinion gradually move away from the United States. In reply to a comment by the Foreign Minister [Ribbentrop] that Japan might be in a position to attack Russia in May, the Fuhrer said that the most important thing from Germany's point of view was that Japan was not defeated by the Anglo-Saxon powers. It must not prematurely dissipate its forces. For us too England was the main enemy. We would certainly not be defeated by Russia. He pointed out to Oshima the long-term danger of the United States and England establishing themselves in a big way on the Australian continent. Oshima is of the same opinion and convinced that Japan would soon secure bases in Australia. In addition, it was obvious that Japan must one day beat Russia, for otherwise the new order in East Asia would be impossible. At the moment, she was still heavily committed with her troops in China. However, he was convinced that the Chungking government would get progressively weaker in the coming months and then Japan would be in a position to withdraw troops from China.

Roosevelt's greatest mistake was to impose sanctions on Japan without at the same time being sufficiently well-armed. This was a really crazy policy. The Fuhrer was of the same opinion and said that if one did not want to wait until one's throat was cut one simply must strike first and Japan had correctly recognized that and done it. The Fuhrer is of the opinion that it is extremely important for Japan and Germany to exchange their military inventions. Germany has no interest in East Asia and Japan none in Europe and Africa...

On 18 January 1942, the diplomatic agreement between the Axis powers of 11 December 1941 was supplemented by a military one. According to this, the world was divided into two zones of military operations along the line of 70 degrees longitude, with Japan being responsible for the area east of the line, and Germany and Italy for that west of it.

96
Why didn't Imperial Japan attack the Soviet Union during World War 2?
22
Did American policymakers seriously consider scaling down Lend Lease Aid to the Soviet Union after the battle of Kursk?
22
How close was the Soviet Union to collapsing during WW2?
6
Post-war plan for Nazi Germany in Russia?
55
Why was Spanish Fascist dictatorship left in power after World War II?
1
Was one of the main reasons Hitler attacked the Soviet Union due to oil?
8
Why didn't Soviet Jews flee east ahead of the advancing Nazis?
2
Articles 3 & 5 of the Tripartite Pact are unclearly formulated. Was this standard for the period?
10
What was the timetable for Germany's Invasion of the Low Countries (Fall Gelb) in WW2?
5
What was the strategic importance of Moscow to the Soviet Union in Dec 1941?