Did Columbus really never know he reached a new continent?

A widespread knowledge is that Columbus died without knowing he reached a new continent.

"I have come to believe that this is a mighty continent which was hitherto unknown. I am greatly supported in this view by reason of this great river, and by this sea which is fresh."

"We knew that land to be a continent, and not an island, from its long beaches extending without trending round, the infinite number of inhabitants, the numerous tribes and peoples, the numerous kinds of wild animals unknown in our country, and many others never seen before by us, touching which it would take long to make reference."

"Never admitting that he had reached a continent previously unknown to Europeans rather than the East Indies he had set out for, [...]"

americas christopher-columbus
Share
Improve this question
edited May 17 '17 at 18:33

I think this question is conflating two things: whether Columbus thought he had found the Indies, and whether he thought he might have also discovered a new continent.

Columbus appears to have been one of those people who believes things that they want to be true, and then go out looking for facts to back them up. What has sometimes been called The Unscientific Method. In his case, he wanted to believe the (East) Indies were nearby, so he went out and found the largest estimate of the size of Asia, paired it with his own personal miscalculated small estimate of the size of the Earth2, and came up with a "scientifically backed" figure of 3,700 km to Japan. The true distance is more than 3 times that.

Even in the 15th Century, this was considered shaky logic, and he was laughed out of every nautical capital in Europe. It was only the news of Dias having discovered the way around Africa in 1488 that persuaded the neighboring Spaniards to take a chance on the nutjob.

So if Columbus had been the kind of guy who could get diverted from this belief by little things like the preponderance of evidence, or everyone else thinking otherwise, he would never have made his first voyage.

Quite possibly. The area south and west of the Indies was not well explored (by Europeans), and it was thought by many that there ought to be an other continent down there because there was so much more land known north of the Equator. Many people for the next couple of centuries even speculatively put it on their maps.

So in Columbus' world view, another continent West of "the Indies" could easily be explained as Terra Australis. Later European explorers who really did go to the East Indies and found landmasses in that region assumed exactly that. This is how Australia got its name.

Here's one such map from about 50 years later. Notice that just about all of the unexplored area in the South of the projection was filled with land rather than sea. 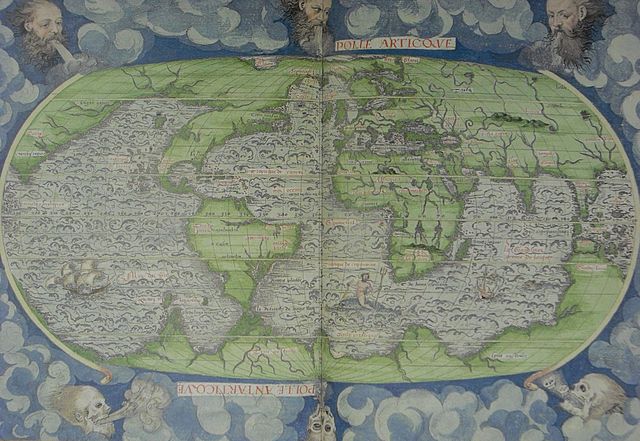 1 - This is the area we today call "Indonesia", although he mistakenly thought Japan was down there too. Because that would have made them even closer.

2 - He took an Arab Astronomer's estimate of the size of the earth, but applied shorter Roman miles to it rather than the Arab miles the Astronomer was using. This error was likely pointed out to Columbus on multiple occasions (eg: the occasions he was rejected).

His round-trip routes were suspiciously perfect. For him to think it was actually India would have been a gross miscalculation of the planet's diameter. He must have at the very least allowed for the possibility that the land he discovered was, in fact, a separate continent: he did have an imagination.

As for him refusing stubbornly to admit it, he must have had pretty good reasons. He had a contract of sorts with his superiors to deliver a new route to India. Delivering something else may have been tantamount to voiding the agreement and everything that came with it: privileges, money, status, etc. He may not have wished to provide them with the loophole. What others said, and what his employers thought was not his concern: he stuck to his guns in order to force them to honor the deal.

Not the answer you're looking for? Browse other questions tagged americas christopher-columbus or ask your own question.

3
Why was Columbus not aware of the existence of America?

19
How did Columbus calculate the size of the Earth?
21
How did people realize that America was a different continent?
11
Why did Christopher Columbus think he had arrived near Japan?
6
How did Diego Gutiérrez know the boundaries (shape of the Americas) when he drew the 1562 Map of America
59
Why did Columbus cross the mid-Atlantic instead of exploring from Greenland?
0
Did Christopher Columbus stay at a Lodge in Cordoba?
12
Which 'evidence' is there for a claim that 'Chinese discovered America in 636'?