How was the Urnfield culture represented around 1300 BC in the area the Romans called Gallia Belgica?

I have been doing some research for the alternate history book I've been thinking about writing for a few years now, and have been happy to be able to fit my events nicely into geography and established history. I have some questions that I'd like some clarification on that are related to the Urnfield culture.

My previous answer was deleted, preventing me from editing it to expand my answer to this.

Here are two rough maps. While these maps don't include modern borders, by observing the coast we can easily see that the border between the Atlantic Bronze Age societies and Urnfield culture is placed between Rotterdam and Antwerp. Note that we can't draw exact boundaries because these are cultures not nations. so, any edge lines should be considered well blurred. 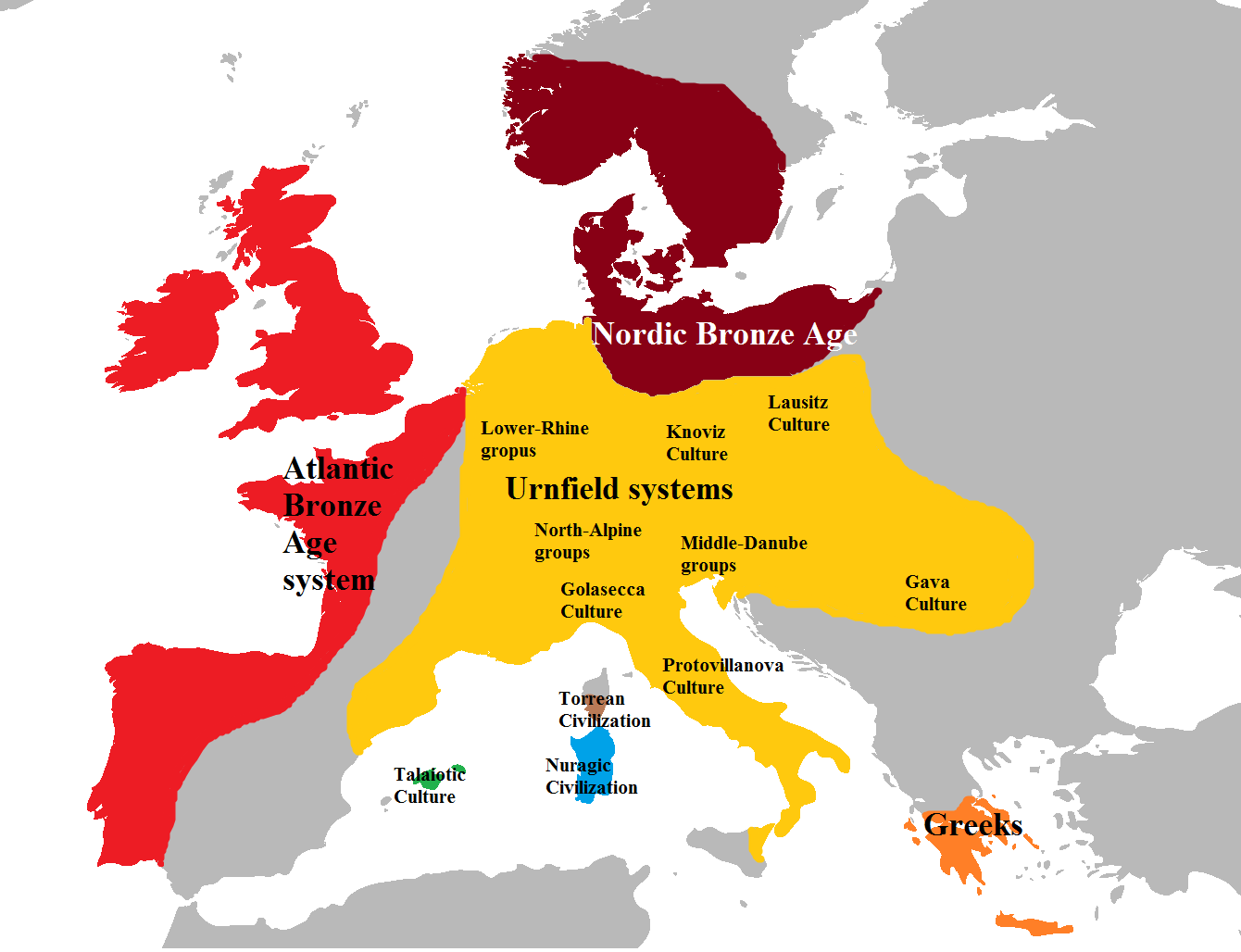 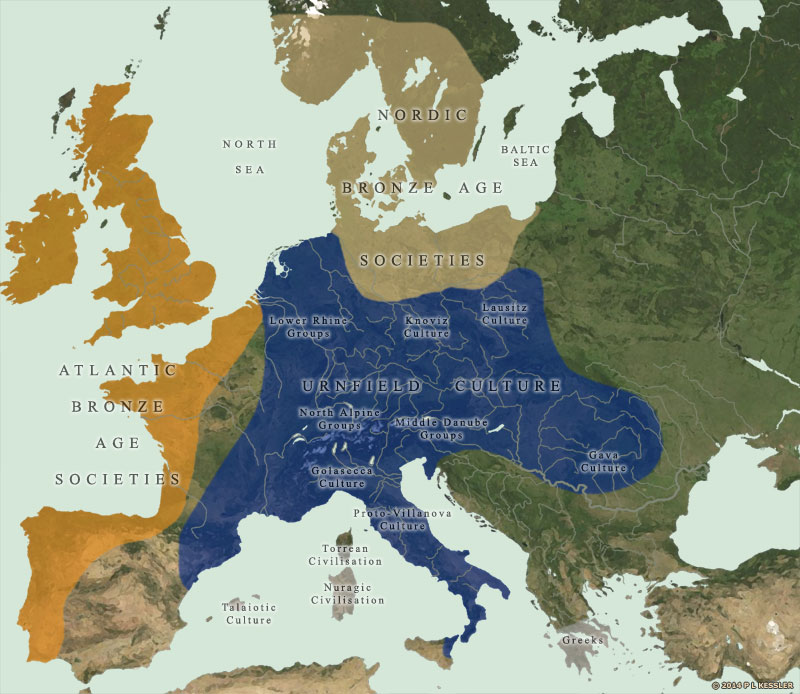 It should also be understood that the Urnfield culture is called a single archaeological culture because the dead were cremated, placed in urns, and buried. But it doesn't mean that they were a unitary culture by modern definitions.

Cultural uniformity existed particularly at the elite level, and is to be found especially in metalwork and fine pottery. The pottery vessels selected for use in burials frequently conformed to a standard type, with a tall, cylinder-shaped neck. There was also considerable homogeneity of bronze types, especially weapons and ornaments, and particularly pins. New techniques for making sheet bronze objects were developed and applied to armour and to vessels, especially buckets and cups. There was also great uniformity in the use of symbols, which clearly had an important but unknown ideological meaning. Sun symbols and birds' heads, among others, are regularly found decorating bronze vessels, armour, and other objects.

Within the general pattern of uniformity there was great local variation. A number of local groups within the Urnfield culture can be distinguished, mainly of the basis of styles of pottery and metalwork, but also showing a wide variation in the actual form of burial.

… By soon after 1000 BCE, and possibly even earlier, further areas still had been included, and the Urnfield complex spread as far as Belgium…

I've included the final partial quote to demonstrate that Urnfield came to Belgium late, certainly later than 1300 BCE. However, keep in mind that Gallia Belgica had a larger extent that modern Belgium. Regardless, it would have been elites bringing the culture with them, not commoners. A typical farmer almost certainly wouldn't have spoken a Celtic-family language anywhere in Belgium at the time. Their roots were in the Hilversum Culture. "

The theory was first proposed by two authors working independently, Hans Kuhn and Maurits Gysseling, whose proposal included research indicating that another language may have existed somewhere in between Germanic and Celtic in the Belgian region.

Having said this, no Hilversum artefacts have yet been found in Limburg.

There was also long-distance exchange at the time, so it is hard to say which influences were due to migrations and which due to cultural shifts among settled peoples. As Belgium and the Netherlands were areas of cultural confluences this leaves you a lot of room for creative interpretation for your book. Also (though I don't have any sources for you) keep in mind that journeys through the North Sea mean that cultural influences (whether by trade or pillage) would have been coming to Belgium via the coasts as well.

So, you could, for example, decide that the ancient version of Antwerp was a relatively cosmopolitan city within a quite conservative farming area. Perhaps a merchant or adventurer from Limburg travels to your cosmopolitan area to seek something more.

Using key terms I've included in this answer you should be able to find additional available information via sources such as Google Scholar.

The name urnfield derives from this peoples burial rights (cremating remains, putting ashes in urns, and burying them)...so best chance you are going to have of identifying borders will be found in identifying these urns in excavations. As such, Urnfield is less of a people group and more of a cultural grouping (ie, the practice of burying urns spread across multiple peoples). Cultural grouping tend to have very fuzzy borders.

Brun introduced the concept of the ‘groupe Rhin-Suisse-France orientale (RSFO)’. This group is situated in the northern Alpine area covering part of southern Germany, Switzerland and northeast France.

. Also during this phase, the southern part of Belgium, particularly the river Meuse area, is included into the expansion zone of the group RSFO (Warmenbol 1988). The western part of Belgium comes only partially under the cultural influence from central Europe

Recent archaeological research, for example, has demonstrated that the Flemish group covered a larger area than hitherto presumed: the urnfield of Blicquy in the province of Hainaut clearly shows the same funeral characteristics as other known sites

Type 21 biconical urns are more frequently attested in the cemeteries. They occur at Aalter/Oostergem, Sint-Gillis-Waas/Ripstraat and Temse/Veldmolenwijk

The problem here is Celtic culture lacks a written language, and the urnfield (proto-celtic) peoples definately don't have their own writing. It makes identifying town names challenging to say the least and pronunciations of their town names is long lost

Not the answer you're looking for? Browse other questions tagged demography bronze-age or ask your own question.

12
What was the world population around 970 BC? Does it fit the biblical narrative?
17
What was the estimated population living in Egypt around 1446 BC?
15
How common was it for people to live 80+ years in the 17th century?
3
What was the age distribution in the Bronze Age? How do I find out?
2
How was the start date of the bronze age determined?