River transportation before steam- did it always require beasts of burden?

Today, it takes gasoline or diesel fuel. Prior to that and thanks to Mr. Fulton, there was steam.

I want to learn more about even earlier river transportation systems, focusing on the Ohio and Mississippi Rivers. However, I would welcome information applicable to the Thames, the Yangtze, the Euphrates, or any major river, anywhere in time from antiquity to 1807.

As an example, consider the crew of a keelboat or a flatboat going from New Orleans to St. Louis (or Shanghai to Wuhan or Um Qasr to Baghdad or ...) How would they have done this? Did they sail for any part of it? Were they able row upstream? Or would they need to find a mule named Sal (a good ol' worker, a good ol' gal) and tow along the bank the whole way?

The articles I have found don't tell me, with one at most saying "the process of moving a keelboat upriver was extremely difficult" with no amplifying details.

Animal power was not limited to being tugged from the shore.

There were also team boats, which were generally horse engine powered. While they don't have much of a history in the US prior to steamboats (the earliest documented team boat was built in 1791), animal powered paddle boats have a long history going back to at least the 4th-5th century when the Romans used an ox-powered paddle boat.

And, of course, you have left out human-powered craft, which other users have pointed out. In addition to rowing, poles, and pulling, there have also been many instances of human-powered paddle boats, particularly among the Chinese.

The most common solution is the one way trip.

The flatboat was the cheapest of the many types of boats and became the standard conveyance for families moving west. All of the boats in this period were hand-powered, using poles or oars for steering, and usually just floated with the current. Unwieldy flatboats were not intended for round trips since they couldn't fight the current for the return journey. This vessel both carried families to new homes in the Ohio Valley and transported goods down the Ohio and Mississippi rivers to market. Once in the Mississippi port of New Orleans the boats were broken up and sold for firewood. The traders would then spend weeks in slow and laborious travel either walking or riding home. Georgian Index

I would welcome information applicable to the Thames 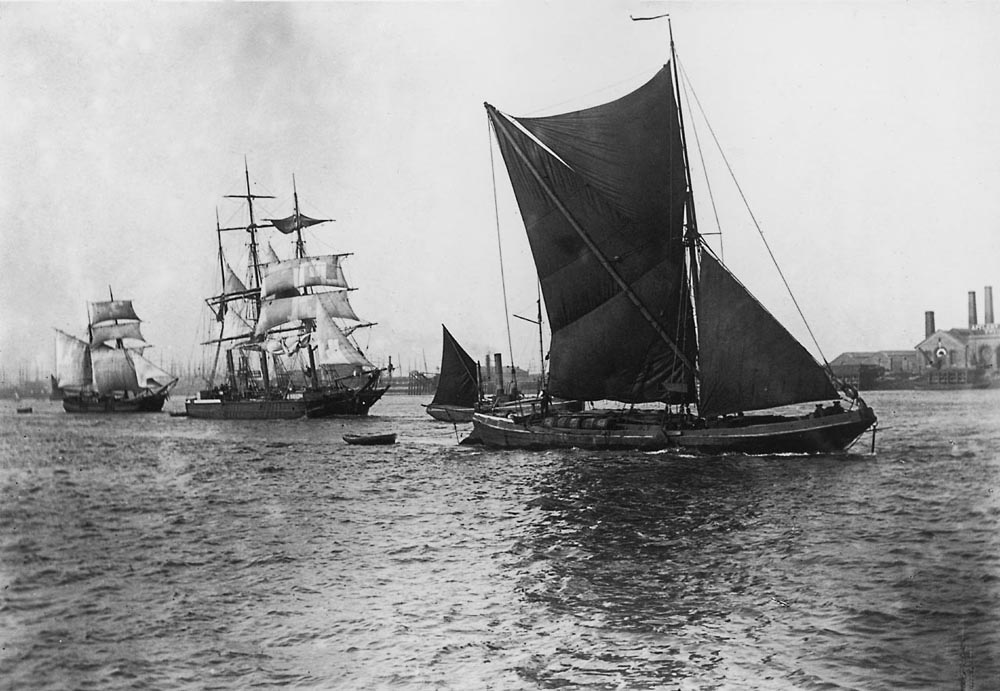 The flat-bottomed hull made these craft extremely versatile and economical. They could float in as little as 3 feet (1 m) of water and could dry out in the tidal waters without heeling over. This allowed them to visit the narrow tributaries and creeks of the Thames to load farm cargoes, or to dry out on the sand banks and mudflats to load materials for building and brickmaking (it was no coincidence that their use peaked while London was expanding rapidly). The main mast could be lowered to clear bridges. Furthermore, unlike most sailing craft, these barges could sail completely unballasted — a major saving in labour and time.

Their heyday came at the turn of the 20th century when over 2000 were on the registry.

Native Americans did not have advanced economies and there is no evidence of mass movement of bulk materials (river barges, canals etc.).

In China, river/coastal boats would be rowed and sailed. There was canal/irrigation systems that used towpaths.

I am unsure about the Tigris and Eupgrates.

In Europe, river boats were often see-faring or specialty galley with sails/oars. There were also canals and tow-paths as economies became more developed.

For the Nile, ships were primarily oar/sail.

There are too many time periods/regions to list sources. Most of this is common knowledge of ancient economies/military transport and can be found from contemporary images depicting war and trade. Archaeological evidence exists as well.

In short, the answer depends maybe - where and when?

In ancient China, when traveling upstream on some rivers, there were labors hired to drag boats while walking on bank. It can be just on the bank of one side of the river, or both sides if the river is not very wide. This can only done for not very long distance and when the current is very unpredictable and strong, which means such service was only offered on certain sections of the river.

Inspired by courier du bois such as the La Verendrye family, the Company of Adventurers trading into Hudson's Bay, colloquially known as The Hudson's Bay Company, used canoes paddled by native Americans to collect furs from most of Canada and part of the Louisiana Purchase, and disburse the trade goods used for payment. This company was founded in 1670 and continues to flourish in Canada today as The Bay; though with less reliance on canoes.

Sailing upstream on rivers is particularly difficult because of the inability of sailboats to point close to the wind, and the consequent leverage effect of the sailing angle magnifying the effective strength of the current. If any of unreliable favourable winds, narrow or twisty passages, shallow passages, or significant current exists on a river then sailing upstream is simply impossible.

Although the fastest modern racing yachts can point to within about 40 degrees of the wind, traditional sailing vessels sailed upwind much less efficiently. Lateen-rigged dhows of the Gulf of Arabia and Indian Ocean sailed to within about 45 or 50 degrees of the wind, but this rigging was unknown in Europe until the early Middle Ages (whence it inspired the hybrid-rigged boats such as the caravel). Pure square-rigged boats such as Viking Longboats could not sail closer to the wind than a beam reach

Further note that any point of sail as close, or closer, to the wind requires a substantial keel. Such a keel significantly increases the draft of the vessel, making navigation only possible in deep passages and harbours. One of the reasons why the canoe has become so popular world wide in the past 4oo years is its combination of shallow draft and light weight, while still retaining good control and capacity. This is the perfect combination for those travelling rivers with rapids that must be portaged.

Let me notice first that "before Fulton", besides river transportation in developed countries existed a dense network of canals. Especially in England and Germany, but also many in the US. You can still travel on canals in most places in England.

Second, besides beasts, people were used to pull boats and barges in some places, for example on Volga in Russia.

But in general the answer depends on the river: how wide it is, how fast is the current, and what are the prevailing winds. Sails were widely used on such rivers as Nile, Dnieper or Thames (see "Thames sailing barge" on Wikipedia).

And of course on most rivers and canals one can row; the only obstacle is a VERY strong current.

Not the answer you're looking for? Browse other questions tagged transportation industrial-revolution or ask your own question.

7
What did farmers/laborers use for boots before modern rubber existed?
4
How common was travelling before the invention of the steam engine?