What was the nature of the Japanese cabinet crisis after the Battle of Taierzhuang?

According to Wikipedia, after the Japanese defeat in the Battle of Taierzhuang, "It was reported in the world's newspapers, however, and by mid-April had provoked a Cabinet crisis in Tokyo". What was the nature of this cabinet crisis, and was it ultimately eventless or did it have effects, such as cabinet reshuffle or change in troop mobilisation?

I did find one contemporary newspaper report, from the front page of The New York Times (April 15, 1938): 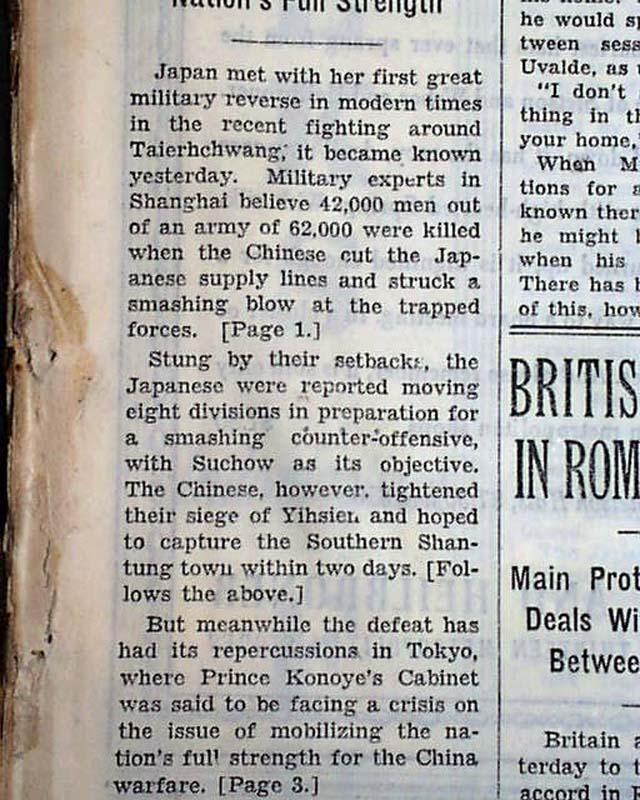 But meanwhile the defeat has had its repercussions in Tokyo, where Prince Konoye's Cabinet was said to be facing a crisis on the issue of mobilizing the nation's full strength for the China warfare. [Page 3.]

There should be more detail on page 3 but that may be behind a paywall. But according to the front page summary and subheadings, it seems that the crisis was about whether to fully mobilise for the war with China; if so what changes were made in troop mobilisations, as a result of this battle?

As page.2 and page.3 are not readable (anyone going to pay for that $38? I'm really curious about the content)

But meanwhile the defeat has had its repercussions in Tokyo, where Prince Konoye's Cabinet was said to be facing a crisis on the issue of mobilizing the national full strength for the China warfare.

As I didn't find any report of this "Cabinet Crisis" from Japanese historical data, these are all I got. On April 15, 1938:

Political statement often implied specific meanings. As there are no obvious evidence of this "Cabinet Crisis" from Japanese historical data and from the timeline detail of this page, and with 1) and 2), they might just attempt to seek for international support, and domestic support for that aggressive war toward China.

Up to the battle of Taierzhuang, the Japanese government hoped for a "limited" war in China, in which they would occupy the Shanghai-Nanjing and the Beijing-Tientsin corridors near the coast, and make peace, or at least a cease-fire in place with China, and prepare for war against stronger countries like the Soviet Union and the United States. In essence, it was a "declare victory and go home strategy."

The Japanese cabinet had three choices: 1) pull out, which was totally unacceptable; 2) a negotiated peace, now made infeasible; and 3) all out war. Although the last was now the only real option, the Japanese Cabinet went through considerable anxiety in deciding to pursue it.

Not the answer you're looking for? Browse other questions tagged 20th-century japan china or ask your own question.

2
Was anyone blamed for Japan's defeat at Tai'erzhuang?

6
What was the Nature of Resistance in 1938 Czechoslovakia?
16
To what extent did the CPC avoid fighting with the Japanese?
12
Was the last Japanese surrender after WWII in the 1970s?
12
What were Chiang Kai-shek's biggest strategic blunders during the Second Sino-Japanese war?
5
Why was Luodian important in the Battle of Shanghai?
2
Physical meaning of the phrase "Beijing-Tianjing corridor" in the context of Sino-Japanese war?
3
Why did the Soviet–Japanese Neutrality Pact take 2 years to sign after the Battle of Khalkin Gol?
4
What was the nature of the Japanese presence in China in the later stages of World War II?