Were there any non-Afrikaner apartheid supporters in South Africa before 1994?

In South Africa before 1994 (i.e., during apartheid), were there any non-Afrikaners who were so racist as to supporter apartheid? I'm wondering about individuals of British Isles descent, or other white ethnic groups: Portuguese ancestry, maybe, or Greek, etc....

Yes, English-speaking white South Africans on the whole were nearly as racist as the Afrikaners and many supported apartheid, even if they were less vocal about it.

For his article "Towards Darkness and Death: Racial Demonology in South Africa" (1988), Pierre Hugo conducted a survey to measure white attitudes toward the prospect of black-majority rule at that time. Although the survey did not ask, "would you vote for the end of apartheid", it is clear that in the late 1980s a solid majority of English-speaking white South Africans were deeply fearful of black majority rule. Here is a table (from a book, South Africa: The Rise and Fall of Apartheid) summarizing the results: 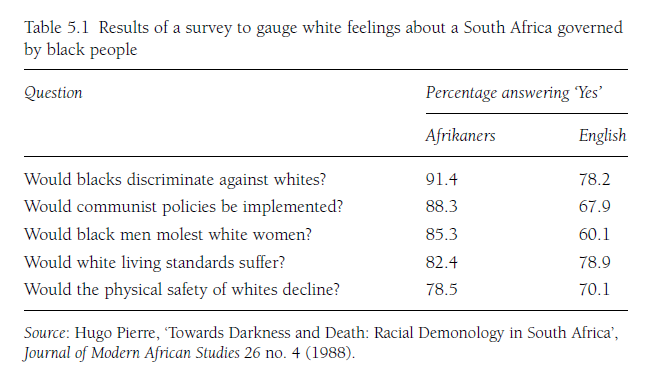 Even on the eve of the 1992 referendum, the New York Times published an article entitled "'Anglo' Vote May Decide Apartheid Referendum". Here is an excerpt:

English-speakers, or Anglos, as they are called, have predominated for years in the anti-apartheid movements among whites, but here in Natal, the one province where English is the leading language, it is not safe to assume that English-speakers automatically will support Mr. de Klerk.

"It's a fallacy created by the liberal press that English-speaking people are inherently liberal," said Duncan du Bois, a Conservative supporter in Amanzimtoti, south of Durban. "It is not so, and it is being proved day by day."

Voter preference polls are prohibited during election or referendum campaigns in South Africa, on the ground that they could sway the outcome. But [...] Pieter Mulder, the Conservative Party's information chief, estimated that as many as one-third of the 1.5 million English-speaking voters had not made up their minds.

So while we now know that a majority ultimately voted to end apartheid, we should not imagine that the entire Anglo South African community was supportive of majority rule all along.

Not the answer you're looking for? Browse other questions tagged racism ethnicity south-africa apartheid or ask your own question.

8
Did the British government oppose racial segregation in South Africa from 1815-1931?
4
How did the white minority in South Africa see their situation in the apartheid times?
5
Did the apartheid South Africa leaders seriously plan to make the bantustans be independent countries?
12
Did the Ottoman government rationalize the Armenian Genocide and other instances of ethnic cleansing as a response to Russian expansion?
4
How was South African infrastructure before 1994?
2
Were there any attempts at a federation or commonwealth to save Austria-Hungary from breaking up after ww1?