What nullified the Missouri Compromise?

I always thought it was the Dred Scott decision in 1857, when Chief Justice Roger Taney declared the compromise unconstitutional. But I've also heard it was nullified by the Kansas Nebraska act in 1854. Was one of these events, or some other, more influential in the repeal of the Missouri Compromise?

Well, I can't really put it better than the current wording on the Missouri Compromise Wikipedia page:

Although already superseded by the Kansas–Nebraska Act, the Supreme Court indicated that the Missouri Compromise was unconstitutional in the 1857 Dred Scott v. Sandford ruling.

Now to get a bit more technical, K-N wasn't a 100% straight repeal. The Missouri Compromise covered the entire Missouri territory minus Missouri itself (dark green in this map).

However, the Kansas-Nebraska act only covered the Kansas and Nebraska Territories. Iowa and Missouri were already states by this time, but that still left some territory in the former and not the latter. 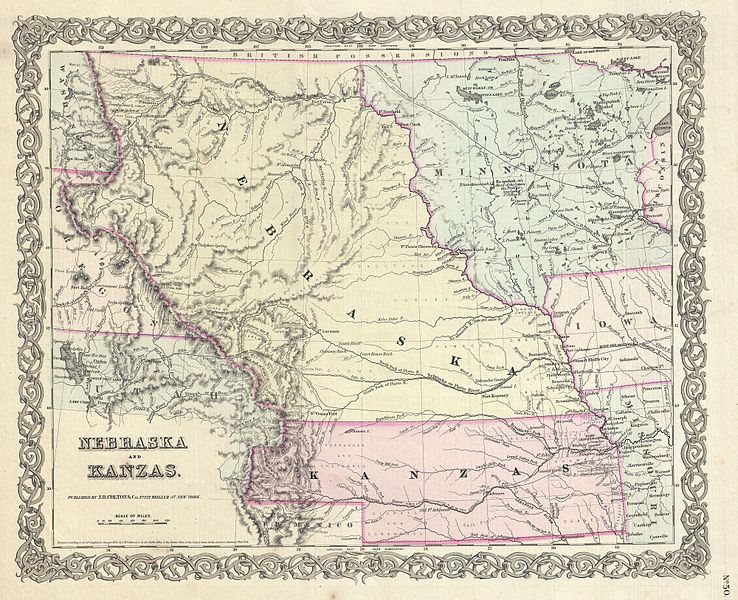 So K-N left most of the territory of Minnesota covered under the compromise. Technically the Missouri Compromise was still the law there, and Dred Scott struck it down1. However at that time Minnesota was in the process of becoming a state, so it probably didn't much affect them, except the leftover territory that is now part of the Dakotas.

Even today that leftover bit of territory isn't very heavily populated, and at the time couldn't have been a large consideration in anybody's thinking. So while technically, when dialed down to enough level of detail, your understanding was correct and Wikipedia's simple statement wrong, effectively the terse sentence from Wikipedia is what happened.

Or I suppose we could say that you're both right.

1 - In fact, this is precisely why that part of the Dred Scott ruling could be made. Dred Scott had been taken by his owner to Ft. Snelling in the part of the Minnesota Territory that was still covered by the Missouri Compromise.

The Missouri Compromise was nullified by the Compromise(s) of 1850 which in turn sprang from the American success in the Mexican War.

The South had earlier agreed to the Missouri Compromise, because the Louisiana Purchase contained a lot more territory in northern, rather than southern latitudes. Under these circumstances, the North would eventually end up with more states, so the South bargained instead, for the "fast-tracking" of Missouri, and later of Arkansas, as slave states.

The South later regretted their bargain, because the "compromise line" of 36 30' (the southern border of Missouri) was well south of other slave states, including Kentucky, Virginia, Maryland and Delaware.

The Mexican war changed all that, by giving America access first to "Texas," (a natural slave territory that the South hoped would be subdivided into several slave states). Other territories won in the Mexican War included the New Mexico Territory, the Utah territory and California. Of these, only California (admitted as a Free State in 1850) was definitely made free by the Compromise of 1850. If not for this, and the fact that America split the Oregon Territory with Britain, the South might have had more territory to expand into than the North.

This changing balance of power emboldened the South to try to "roll back" the slave line north of 36 30' to include Kansas, which is on the same latitude as Virginia, increasing the possibility that Colorado, Utah and Nevada would also become slave states.

Not the answer you're looking for? Browse other questions tagged united-states 19th-century slavery north-america race or ask your own question.

0
How did Lincoln's views change up to the Lincoln-Douglas Debates?

4
The Great Compromise, is there analysis on the outcome?
5
What is the meaning behind Thomas Nast's political cartoon "Compromise--Indeed!"?
2
Was the Missouri Compromise too arbitrary to stop spreading of slavery to the west and the north?
35
Was slavery really on the way out in the antebellum USA?
35
Was slavery in the United States legally limited to blacks?
3
Did the Missouri Compromise Signify the Era of Good Feelings?
5
Why did the American South agree to the compromise of 1850?
7
What made Missouri the "Show Me" State?
4
What percentage of slaves originally brought from Africa were purchased from slave traders as opposed to having been captured by Europeans?