Did c.1900 France have a law against foreign government resisting its conquest?

I found this picture in Wikipedia (its copyright expired so it can be reproduced here): 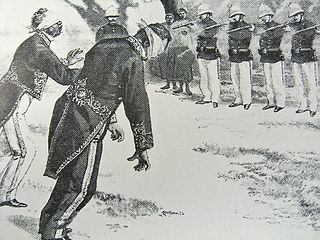 Execution of Prince Ratsimamanga and the Minister of the Interior under order of General Galliéni for having resisted France's annexation of Madagascar. Picture published in the French magazine L'Illustration, November 22, 1896.

This seems to be the aftermath of the Second Madagascar Expedition (1894-1895), a French conquest of the previously independent Madagascar.

Interestingly, the execution seemed to be carried out openly, a depiction of it is published in French magazine, and under official orders. The victims were a prince and a minister of a previously sovereign country, and the crime was "resisting France's annexation".

Did the French consider this execution legitimate? Were there laws against resisting France's conquest? How did the law get introduced and how were they applied? For example, France also conquered a lot of countries under Napoleon and it didn't execute their governments for resisting it.

It was somewhat more complicated. According to Wikipedia France conquered Madagaskar in 1895 and sent

the royal family into exile on Réunion Island and to Algeria.

(Wikipedia, "Madagaskar", chapter French Colonization). After this an uprising started against the French rule. So this prince was apparently executed as a rebel.

Some more detail and pictures are here:

As I understand, after the conquest, the French rule became legitimate (from the French point of view), and France, as most states had legal rules for prosecution of rebels against the "legitimate rule".

As another similar example from the same epoch, Bolsheviks took power in the Russian empire by brute force, they arrested the government and dispersed the elected Constitutional Assembly by force. Since that day they prosecuted everyone who resisted their "legitimate power". (They eventually killed millions.)

Madagascar was already at a minimum a protectorate of France since the former queen had signed a treaty ceding control of the island to the French. Subsequent to this, a rebellion started against the French. Ratsimamanga was accused of conspiring with the rebels--a capital offense.

Not the answer you're looking for? Browse other questions tagged 19th-century france imperialism madagascar or ask your own question.

13
How did France worsen its relationship with Turkey?
14
Why did France put so many resources into fighting Algeria in comparison to its other former colonial holdings?
7
Did Marie Leszczyńska, queen of France, have any lovers?
9
Have any of the Presidents of France taken advantage of its co-princeship of Andorra in a significant way?
4
How did opinions of France and Britain affect American foreign policy up to 1820?
5
Did the USSR have a more positive relationship with France than other west european countries after 1945?
28
Why did Great Britain switch its alliance to France?
3
What economic incentives (if any) did France have to aid the American army during the revolution?