What were the effects of Bushido on Japan after the Meiji Restoration?

As part of the Meiji Restoration, the samurai class was abolished and their members enrolled as shizoku under the new regime. While their ancient privileges were lost, the former samurai continued to play a dominant role in Japanese society for decades to come.

What impact, if any, did their ideology of the Bushido have on Japanese society during this period? Was there any lasting moral effect?

(I think the question really has two parts: (a) effects of the samurai's ethics, and (b) the effects of something called "bushido". I will address them in order.)

Legacies of the Samurai

In the early years of the Meiji Renewal, the samurai were enrolled as the shizoku, and saw their privileges and stipends gradually abolished. The bulk of them were viewed as a liability and an anachronism, even by their peers in high office. There was not yet any nostalgia for the samurai way, and no conscious adoption of motifs to evoke the bushido.

Nonetheless, the samurai class had been the most educated in Japan, and the most versed in running the government from the highest to the lowest levels. Inevitably, the samurai dominated government and educatoin throughout the Meiji years. Even in a period of rapid and consequential changes, or perhaps because of it, they left an imprint on many parts of the new society and government.

One example is the Tokyo Police. The Meiji force mostly consisted of the same samurai who had policed the capital under the Tokugawa shogunate, and:

One distinctive feature to emerge in the Tokyo police seems attributable to the samurai legacy: the emphasis on public education and improvement as major tasks of the police organization ... The publication of books and pamphlets to educate the public in the new laws and regulations, and the work of the police in disseminating information about the public health regulations are the most laudable aspects of this legacy.

Likewise, the educators of Meiji Japan (especially early on) were largely drawn from the shizoku. While teaching materials in the early Meiji years were overwhelmingly translated from western sources, room was nonetheless made for the largely samurai staff to instruct their pupils in the traditional values they themselves had been brought up with.

[M]any of the ideals taught to Meiji schoolchildren would have been very familiar to young samurai pupils or even to commoners who went to school before the Meiji Restoration of 1868 brought a group of modern nation-builders to power. Such traditional values included frugality, obedience, patience, endurance, courage, selflessness, modesty, decorum, harmony and honesty.

One could still discern much of these values in modern Japan. However, caution should be exercised in attributing them to the samurai. That the old samurai class lionised such values did not hurt the preservation of these values. On the other hand, they were never exactly exclusive to nor particularly identified with the samurai in the first place, many having been derived from Chinese philosophy and Confucianism, or from Buddhism before it.

Onto the subject of bushido. It is important to realise that the Meiji conception of bushidō (武士道) was largely a fabricated myth. It was a romantic image born of nostalgia, constructed from fragments of the past to serve the purposes of modern political rhetoric.

Some Meiji intellectuals discovered publications from the Edo period which they used to buttress their formulation. The most important of these were Yamaga Gorui by Yamaga Soko [and] Hagakure. [The latter] was meant to be a personal memoir. Yamamoto Tsunetomo explicitly requested that it be burned after his death. Therefore, at the time of its publication it was not read even by the warriors of the Nabeshima domain to which he belonged. Only in the Meiji period did those interested in bushido begin reading it.

In this sense, then, this version of bushido did not affect Japanese society as much as it was a product thereof. The concept gave it a historical root and coated it in alluring romanticism, but fundamentally the bushido of this era remains an invented tradition.

It is difficult to ascertain the extent to which jingoism and nationalism drove the bushido myth, and to what extent the bushido myth nurtured jingoist nationalism. It is a vicious cycle of sorts, feeding on and fueling each other. What is clear however, is that the bushido myth is almost wholly disconnected from the traditional ways of the samurai class.

Busido is perhaps most closely associated with Japan's military transgressions in the lead up to, and during, the Second World War. Western popular consciousness maintains an image of Japan in this period as a land of fanatical militarism and zealous patriotism. Suicidal attacks and refusal to surrender in particular are often attributed to a samurai tradition.

To the limited extent that this image is true, however, it has very little basis in Japan's samurai heritage.

In fact, there was no mention of samurai anything in the Imperial Rescript of 1882, which formed the basis of the the demand for absolute loyalty, dedication and patriotism from Japanese soldiers. The nation was still in the throes of westernisation. The resurgence and romanticisation of the samurai would not happen for years yet.

[B]ushido became a widely accepted and fashionable concept during and after the Russo-Japanese War ... [By 1906] imperial bushidō called for absolute loyalty to the sovereign and nation, and sought to instill a willingness or desire to die for these causes. [This contributed] to the rapid popularization of the warrior ethic during wartime, and many bushidō theorists came to accept the basic framework of imperial bushidō.

The vaguely defined, but emperor-centric, version of the bushido that emerged from Russo-Japanese War is not in any serious sense a continuation of the ethics of actual samurai in history.

When the samurai were an active fighting force during Japan's strife-stricken periods, their loyalty were never absolute, nor were they particularly keen to die. The last great period of samurai wars, for example, was characterised by gekokujō (下克上) - the overturning of superior/subordinate relationships by force or political manipulation. In other words, coups.

It was only later, during the prolonged peace of the Edo Period, that the samurai and their code of ethics were defined. Their earlier martial traditions informed the development of the original bushido, but did not dictate it. For by this point, the long peace had transformed samurai warriors into administrators.

[B]ushido was codified as the ethics of the military ruling class during the long peace of the Tokugawa period, when wariros were slowly transformed from a class of sword-wielding soldiers to brush-wielding bureaucrats. Earlier elements of warrior behaviour were certainly incorporated into bushido: as Conrad Totman points out, the readiness of the warrior to die in battle was recast for the bureaucrat as the basis of incorruptibility ... Even as it was codified in the seventeenth century, then bushido had little to do, in practice, with military men.

Thus, the bushido as it was known prior 1867 reflected the pacified reality of Japan at the time. The military focused bushido that emerged in the late Meiji period could not be fairly described as a continuation of this earlier tradition.

The refashioning of tradition is a common strategy used by social agents who with to present altered cultural institutions as "our tradition from time immemorial" so that people will accept them as "natural." ... [Soldiers who] were literally frozen to death in trenches on the north China front, were presented as "warriors of yesteryear", endowed with the Japanese soul and symbolized by cherry blossoms. They were cloaked in the shining armor of warriors of medieval times.

Even though samurai, in the form of armed retainers, were abolished, the class divisions in Japanese society remained, though in a relaxed form. A much more far-reaching change was the introduction of private land ownership in 1873. Before this most Japanese were poor tenants on huge tracts of land all belonging to a single lord, each lord employing samuarai. By distributing land among yoeman and allowing private ownership it broke down this feudal structure and eliminated much of the structural power of the samurai.

That being said, the samurai and noble families continued to be influential and have a privileged place in society, and this remains true even today. For example, a Japanese employment form (which is the same for EVERYONE) looks like this (as an American would fill it out): 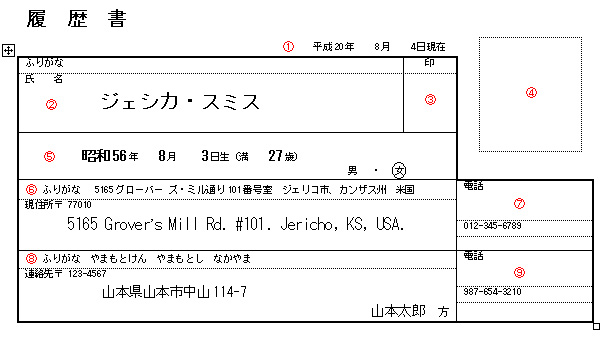 Notice cell number 3 to the right of the name box. This is for the 印鑑 (seal). Normally only people of noble lineage have a seal. Although of course a commoner can make up a seal, executives know the difference between noble seals and common ones. Also, notice the large amount of space in the name box, box 2. The reason for this is that you are expected to put not just your name there, but your lineage. Even for a very lowly position like a janitor, it is expected to put the names of both your parents and your home village or place of origin. Nobles or samurai descendants will list their main lines of descent and any key ancestors. This information has a large impact on a person's prospects for employment, especially for high-paying positions.

Not the answer you're looking for? Browse other questions tagged japan social-history samurai meiji-restoration or ask your own question.

13
What became of the last samurai?

6
What precipitated the Meiji restoration?
5
Was Christianity legalized during the Meiji Restoration?
17
What role did the Ancient Samurai heritage play on Modern Japan during WW2?
18
Why were women excluded from the succession line in the Meiji constitution?
13
What became of the last samurai?
19
When did the English and Americans realize that vegetables were healthy?
4
Did the House of Representatives during Meiji Era exercise their powers?
3
How did the Japanese populace view the emperor during the Edo Period?