Why do some sections of Great Wall of China seem to be bidirectional?

Official historiography says that Great Wall of China is built "across the historical northern borders of China to protect the Chinese states and empires against the raids and invasions of the various nomadic groups of the Eurasian Steppe." — (Wikipedia)

Eurasian Steppe is located North from Chinese states, so the fortifications supposed to face North, toward the place where possible invaders may come from.

However, looking at pictures of Great Wall, I notice many places where the fortifications rather look like bi-directional, e.g. the parapet seems to be convenient to aid defense from both directions, to North and to South, merely equally.

Here's what I mean: 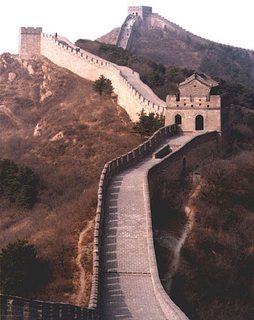 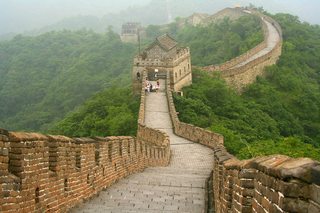 It is not only about walls itself. Some towers also look like they are built to assist fire in both directions.

Question: Is there a decent explanation of this phenomenon?

Disclaimer. I'm not a military expert, so answers like "your question comes from a false premise, because…" are also greatly appreciated.

china medieval-china
Share
Improve this question
edited May 5 '20 at 19:12

Google found a book that seems to indicate that fragment of the wall has been built after peace with Mongols has been achieved, therefore, implies the battlements probably had a decorative or propagandistic purpose.

The portions of the wall in your photos were rebuilt for tourism after 1970 or so. Looking at reconstructed wall is not a good method for determining the original design. You'd have to look at how the wall was originally build.

Here is a photo I took of some un-restored wall in Beijing in 2012. 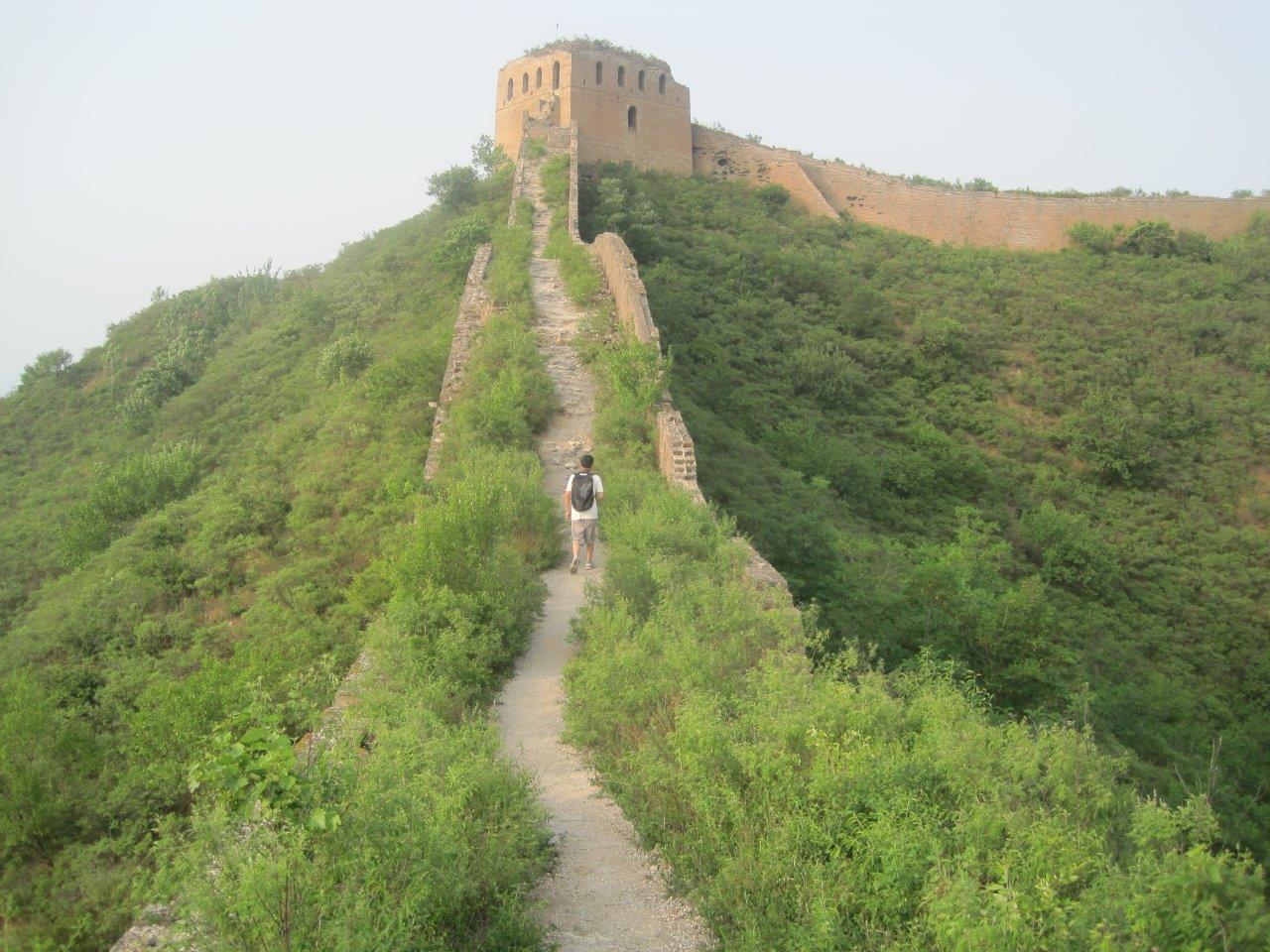 Most of the wall in this photo is in relatively good condition. Compare that with this photo: 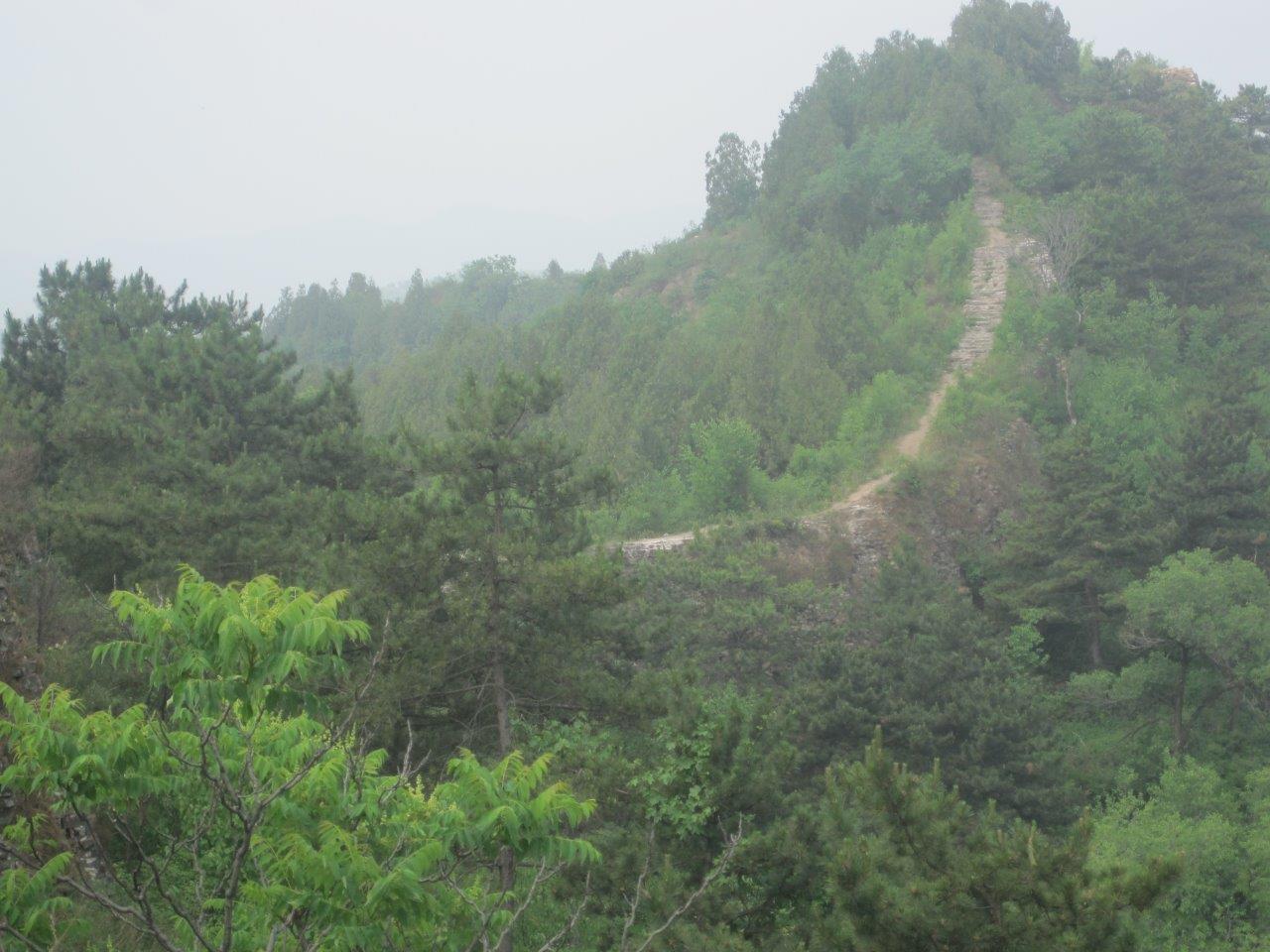 I'd say this part is in fairly good shape. Here's another interesting one: 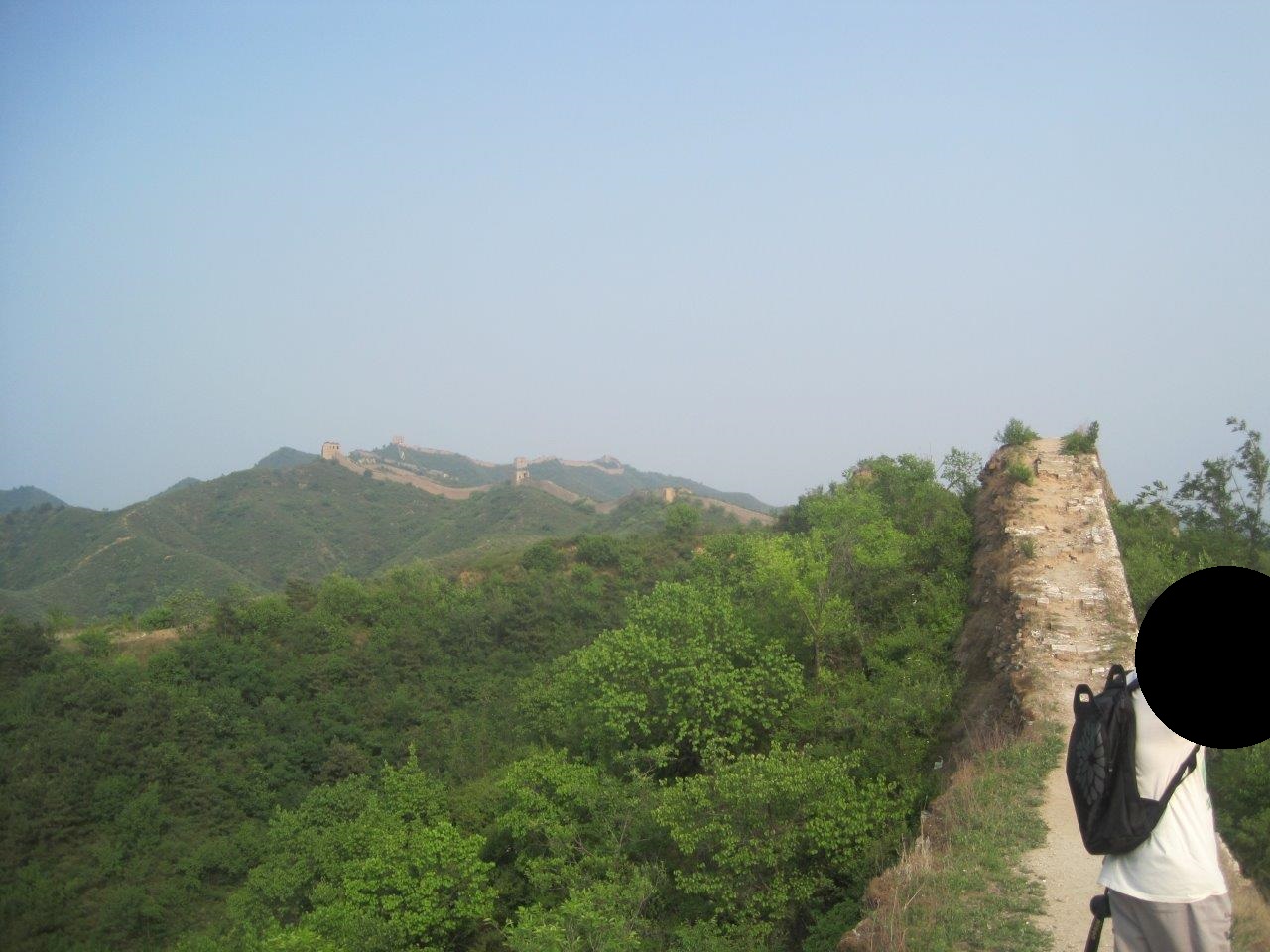 You can see that most of the wall in the foreground has eroded away, although some remains. Contrast that with the rebuilt part in the background!

And now for another typical portion of non-reconstructed great wall: 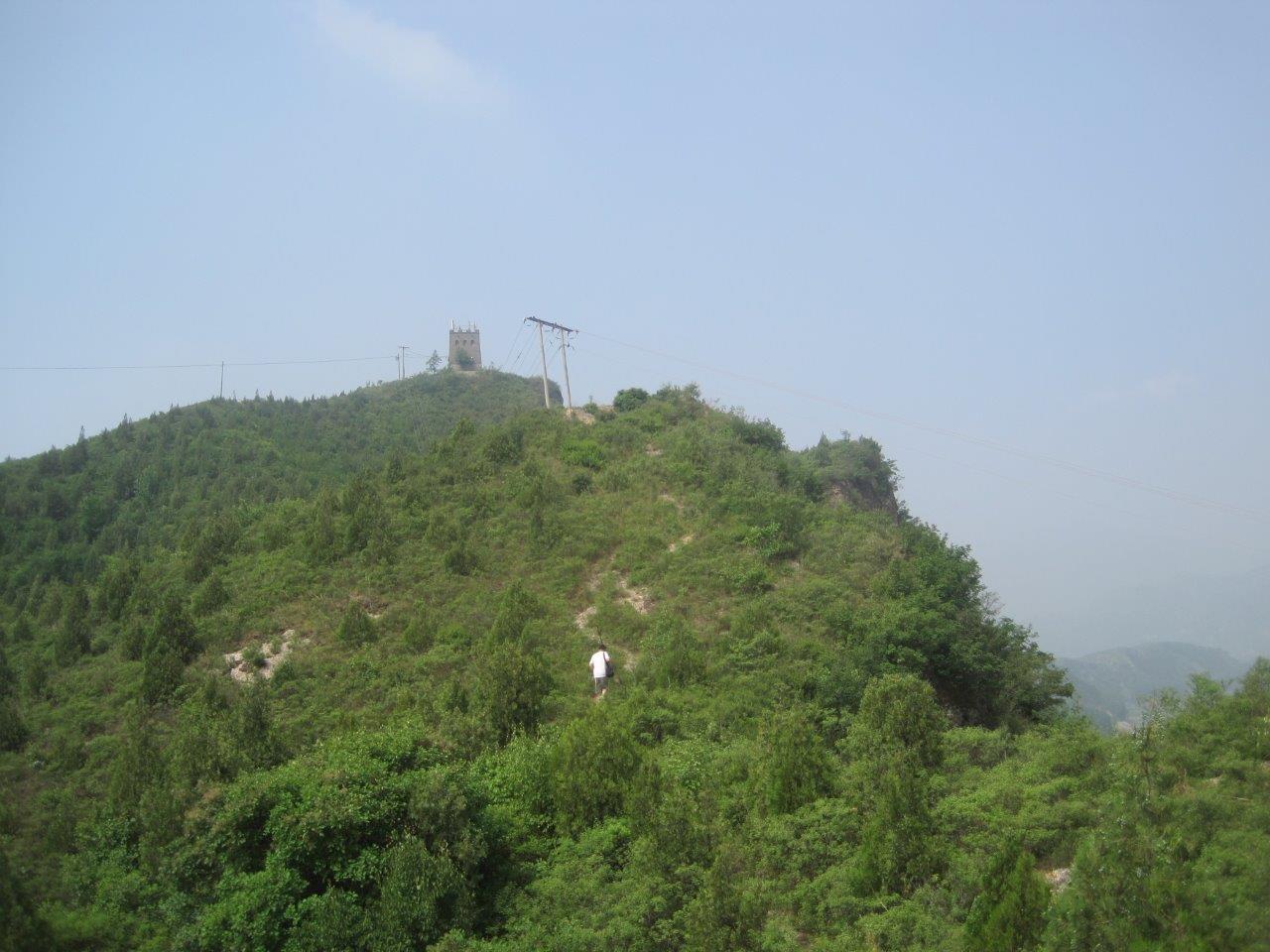 It look, and feels, like a foot path, although you can see the foundation in the vegetation as you walk. Disregard the great-wall-esque mobile phone tower at the top of the hill!

I don't have a feel for what % of the unrepaired wall is mostly gone vs in good shape, but having no repairs for hundreds of years definitely leads to a huge variation in quality.

It might be a good SE question about what the Ming portion of the wall originally looked like, and how it was designed, and how it evolved over the centuries.

I'm no expert at about this wall, or Chinese history in general, but the ability to defend from multiple directions is key part of a sound defense.

The Chinese name for the wall translates to "The Long Wall". If you include hills, rivers, trenches etc the length is/was 5,500 miles!

Can you man 5,500 miles of wall? Can you man them all the time? Some folks are going to get through... perhaps with the element of surprise. But once they are through the surprise is gone. Now you can easily man your wall where it is needed.

So you want to make it hard for the invaders to get through and impossible to get back! Or if not impossible, at least expensive.

Therefore you want to do what Caesar did at the battle of Alesia and build a double wall.

Edit to add: The wall in the photo seems to be bi-direction because it is bi-directional.

Your question is based on a false premise relating to military science.

The wall is necessarily bidirectional. The purpose of the wall is to provide a road for reinforcements, summoned from bastions or settlements. These reinforcements would have to recapture local bastions if they had fallen, and then prevent further movement by opposing forces either way across the wall or the breach in the wall.

The wall is primarily a military system for observation and reinforcement. Secondarily it is a logistic and communications route. Tertiarily it is a series of bastions to observe, communicate intelligence on and delay opposing forces. Finally its least function is as a fortification in itself.

And by design as the wall may have been breached and crossed by the time reinforcements arrive, the fortification has to be able to fight on both sides.

One theory is that it was a fail safe of getting pushed across the Chinese Border. The border of China was very dynamic and the Great Wall was created during the "Warring Period" when what we see as "China" today was controlled by many different lords vying for control. The different "Big boys of the block" through out the creation and the Great Wall made it in different ways, some saw that they might be pushed up beyond into Mongolian Territory and saw they could use that. Another theory is that it was to fend of Mongol Raider before and after they enter into Chinese territory, the 2 sided defense allows for firing into Chinese territory and Mongol territory. But it's just a theory.

The wall was probably penetrated many times. It would be easy to attack a camp on the side of the wall. Notice there are no castles around, now I am not a military expert, but if I had such a vast territory to patrol I would try to pull shifts from the towers, and watch both sides. :)

I believe the reason is decorative, but also somewhat functional. I seem to recall reading, the wall must be wide enough for 4 riders as one the design requirements. And given how tall the wall (20-23 feet on average) is, it would probably have been an OSHA (Occupational Safety and Health Administration) violation to leave one side of the wall without railing.

And if you are already putting up railing, you might as well make it symmetrical for aesthetic...

But I really don't know.. and I doubt anyone does, as it took the chinese about 2000 years to build and rebuild and refurbish and augment the Wall...

Not the answer you're looking for? Browse other questions tagged china medieval-china or ask your own question.

31
Why does the Great Wall of China follow such a bendy route?