Was Mohammed known and respected in seventeenth-century Europe?

I’m reading Andrew Pettigree’s fascinating book, The Invention of News: How the world came to know about itself. In the early days of newsprint, many felt that only people who actually needed to know about foreign wars and suchlike — merchants, statesmen — would profit from reading news.

It was only at the very end of the seventeenth century that a German author would join the debate with an unambiguous statement in favour of reading newspapers. Kaspar Stieler’s Zeitungs Lust und Nutz (The Pleasure and Utility of Newspapers) was a ringing endorsement of the right to follow the news:

We who live in this world, must know the present world; we get no help here from Alexander, Caesar or Mohammed if we wish to be wise. Whoever seeks this wisdom and wishes to partake in society must follow the papers: must read and understand them.

I was struck by the way Steiler lists Mohammed alongside Alexander and Caesar. These seem an odd trio. Are we talking about Mohammed the prophet, or Mohammed the war leader? The company he’s keeping in this excerpt imply the latter.

How did Europeans of the age view Mohammed? Was he seen as a dispenser of wisdom? A false prophet? Or merely a secular conqueror, like Alexander? And, if as a conqueror, was he respected and admired, seen as a great leader, as Alexander was?

Stieler would probably have seen Mohammed as a military leader at the roots of Ottoman Empire. This position is not exactly within current scholarship, but the history of Islam was not a well researched topic in Stieler's times. The passage is from 1695. The Ottoman Empire peaked in 1683, controlling lands from Algiers to Baku, from Budapest to Mecca, being larger than any European state, even than the ancient Roman Empire. Writing this, he probably remembered that in 1685 they were invading Vienna which was 600 km from his home city of Erfurt.

This map was published in Germany circa 1670, as a reference that the geographical extent was clear at the time. 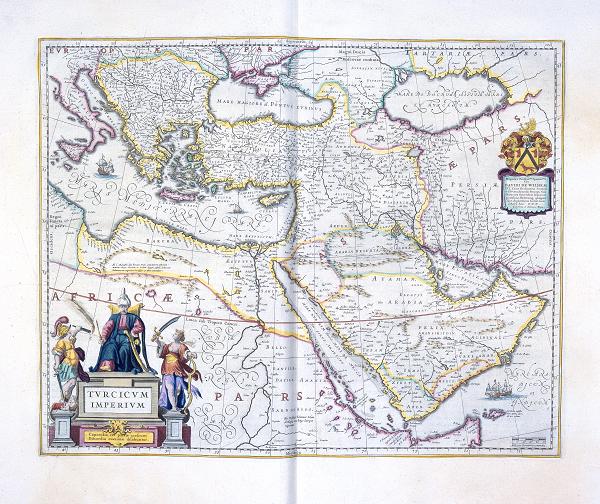 The Battle of Vienna of 1685 was when perception of Ottomans as an overwhelming military power began to change. But the turning point was the Battle of Zenta on 11 September 1697.

Not the answer you're looking for? Browse other questions tagged europe islam or ask your own question.