How many surface ships have reached the North Pole?

I realize that the nuclear-powered icebreaker Arktika (Soviet Union) reached the north pole on August 17, 1977. However, I would like to know of any other ships that have also reached the North Pole.

I realize I should probably have specified Geographic vs. Magnetic North Poles, but either is nice especially if specified.

This quote came from the first paragraph of this page, which is in Russian. This is an approximate translation.

By September 2007 the North Pole had been visited 66 times by different surface ships: 54 times by Soviet and Russian icebreakers, 4 times by Swedish Oden, 3 times by German RV Polarstern, 3 times by USCGC Healy and USCGC Polar Sea, and once by CCGS Louis S. St-Laurent and by Norwegian Vidar Viking.

So, quite a few have reached the Geographic North Pole. I can't find a more recent number, however.

The Magnetic North Pole actually moves around rather a lot. Generally over the last 150 years or so it has been in Canadian territory, but often it is on dry (well...frozen) land. 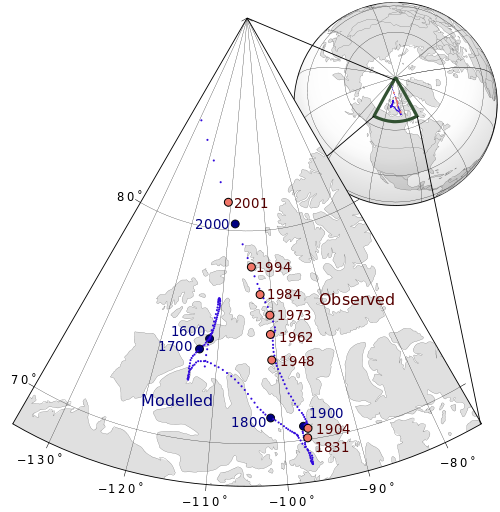 It isn't exactly on your typical tourist trade routes, but it generally isn't nearly as difficult to reach as the Geographic North Pole. Inuit have traditionally lived on those islands, and some still do today.

Wikipedia credits three sets of Europeans as being the first to lead expiditions with the express purpose of finding the Magnetic North Pole. They are James Clark Ross, Roald Amundsen, and Canadians Paul Serson and Jack Clark.

However, given that the Inuit have lived there for centuries, and folks of Icelandic extraction several hundred years earlier had settlements at nearby Greenland and North America and explored all the nearby islands, it is tough to be too impressed.

Not the answer you're looking for? Browse other questions tagged exploration nautical or ask your own question.