Has there ever been a battle with only a single survivor?

Do we have record of any large scale battle (for example more than 1000 combatants) where only one person survived? I just thought of it randomly and wondered whether it may have ever happened.

The British Army left in Kabul, Afghanistan after the First Anglo-Afghan War, was to leave after an Afghan uprising.

The main contingent of some 16,000 troops and associated civilians was attacked throughout their journey to Jalalabad, eventually only a single survivor Assistant Surgeon William Brydon. He was asked upon arrival what happened to the army, to which he answered "I am the army".

The Battle of the Little Bighorn (or Custer's Last Stand) led to a slaughter of the American forces. Every American soldier who was present when the battle began was killed, except for one scout who left mid-battle and a single horse.

Yes, there was a battle between the Spartans and Argives described by Herodotus. They decided to solve the dispute in a "fair way" without risking their full armies, so 300 soldiers were chosen from each side, and it was agreed that the side that loses would recognize its defeat. The result was one Spartan and two Argives surviving. The Argives rushed back to report their victory, but the Spartans made the argument that the battlefield remained at their disposal because this one soldier remained. So the war continued.

The same Herodotus says that there was one Spartan, surviving the battle of Thermopylae. He was very ashamed of this. He was killed at Plataea. His name was Aristodem.

As a counterpoint to @Gwenn 's answer: At one point during the Battle of Guadalcanal; Mitchell Paige was the only surviving member on the American side of a key portion of the front line during a major Japanese counter attack.

His Medal of Honor Citation:

for service as set forth in the following CITATION:

For extraordinary heroism and conspicuous gallantry in action above and beyond the call of duty while serving with the Second Battalion, Seventh Marines, First Marine Division, in combat against enemy Japanese forces in the Solomon Islands Area on October 26, 1942. When the enemy broke through the line directly in front of his position, Platoon Sergeant Paige, commanding a machine-gun section with fearless determination, continued to direct the fire of his gunners until all his men were either killed or wounded. Alone, against the deadly hail of Japanese shells, he manned his gun, and when it was destroyed, took over another, moving from gun to gun, never ceasing his withering fire against the advancing hordes until reinforcements finally arrived. Then, forming a new line, he dauntlessly and aggressively led a bayonet charge, driving the enemy back and preventing a break through in our lines. His great personal valor and unyielding devotion to duty were in keeping with the highest traditions of the United States Naval Service.

There's also a longer somewhat dramatized version of the events of the night of Oct. 26, 1942 floating around the internet. Due to length, I'm only linking to a copy of it.

Not really one survivor, but pretty close. Olshansky's marines group.

On 26th March 1944 Soviet marines group consisting of 68 men (as only 55 names are known, some people argue that there were only 55 of them) landed in Nikolaev (now Ukraine) sea port. They fought against Germans for three days: 26-28 March 1944. At the end there were only 11 survivors, all wounded (one died later in the hospital). In the morning of 28th March Germans had to withdraw, because the Red Army had entered the city of Nikolaev from north and east.

The exact number of Germans fighting in the port is unknown, but there were three infantry battalions, which is far more than 1000 men. Germans had 18 attempts of assault, but all were unsuccessful. The losses of Wehrmacht were really significant, as at least one battalion was fully defeated.

If the legend is to be believed, Horatius Cocles once fought an army (mostly) on his own and survived, even achieving his tactical goals.

It was disaster. If the Etruscans crossed the bridge, they would take Rome. Horatius, a young Roman soldier, called to his friends, “Come on! We’ll hold the bridge while the others chop it down.” His friends froze. They were terrified at the thought of facing an entire army. “Then at least chop the bridge down while I hold them off alone,” Horatius pleaded.

He stood on the bridge and faced the Etruscan army alone. “Who among you is brave enough to face a Roman soldier,” he shouted. The Etruscans threw spears at him. But they were some distance away, and the bridge itself gave Horatius protection. Horatius stood firm, fighting like a hero. When the Etruscans tried to cross the narrow bridge, Horatius cut them down. Two of his friends rushed out to help him. Behind them, other young soldiers were frantically sawing at the heavy cords that held the bridge.

Horatius felt the bridge give way. “Go back,” he shouted at his friends. His friends raced for the protection of the walled city. It was hopeless, they thought. One man cannot stop an entire army. Only the gods could save them now. But Horatius was right. The bridge was giving way. As the bridge began to fall, Horatius turned and dived into the Tiber. The gods were with him. He swam back to Rome safely, and received a hero’s welcome.

Assuming the legend is true (sounds fantastic to me), one could argue that he was the sole "survivor".

Would the battle of the Alamo count. From wikipedia

Though this states 2 people survived, I dont think I would count Joe as a combatant because he was a Travis' slave and not really there by his own volition.

Another very close answer to this question could be the Dade massacre that was part of the Seminole Wars. Only 3 soldiers survived the attack and one was killed by a Seminole scouting party shortly after the battle, and before he could return to camp.

the wikipedia page states, "Only three U.S. soldiers were reported to have survived the attack. Private Edward Decourcey, who had been covered by dead bodies, and Ransom Clark who appeared "dead enough" with five wounds and bleeding cuts on his head. The next day, a Seminole pursued them on horseback and Decourcey was killed after they had split to avoid joint capture. Clarke made it back to Fort Brooke, collapsing within a mile of the Fort and being helped all the way back by a friendly Indian woman. Clarke provided the only narrative from the Army's side of what had occurred. A third soldier, Private Joseph Sprague, also returned to Fort Brooke and continued serving in the Army. He was illiterate, and did not leave a report of the battle"

Question: Has there ever been a battle with only a single survivor? 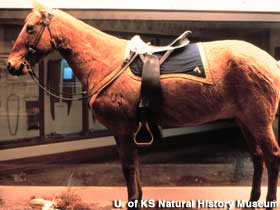 The battle between the Horatii and Curatii in ancient Rome, but it is a borderline case because of two reasons:

71
Has there ever been a truly multi-sided war?
16
Which city has been captured most frequently?
45
Has anyone ever named a war after their own country or faction?
20
Has any medieval army ever fought 3 or more distinct battles on the same day?
2
Has an encirclement ever succeeded with numerically inferior cavalry?
0
Has any war in recorded history ever resulted in the complete annihilation (civil and military) of an enemy - all of them killed with no survivors?
49
Has there ever been an instance of an active nuclear power plant within or near a war zone?