Where were Racka sheep brought to Europe from and when? 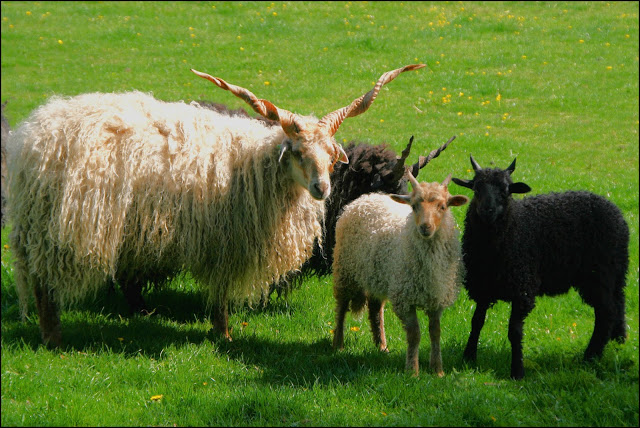 These are Racka sheep. The Racka is a unique breed with both ewes and rams possessing long spiral shaped horns. This sheep is a bit of a mystery, a mystery whose solving will shed new light on the history of the Balkans.

(You can read what we know about this type of sheep here, where the quote is from: Racka sheep

Does anyone have any information about this type of sheep being depicted on any Iron or Bronze age reliefs or drawings from Middle east or Central Asia?

Based on FAO, I will use the name Corkscrew Walachian / Valachian, altho Wikipedia has it as Wallachian Sheep.

Name of the Breed

On the naming convention and to make sure we are referring to the same breed, i.e. Racka, p.148 - emphasis mine:

Zackel is the German for the name which Linnaeus gave to a breed from another phylogenetic group of breeds, O. a. strepsiceros, (strepsiceros = zackel = straight, pointed horns), the sheep which Buffon, then Darwin called Walachian, correctly named Corkscrew Walachian (Valaşca Vitoroga) by the Serbians, wrongly named Raţca (Racka) by the Hungarians and Romanians, which means Serbian and which belonged to the group of sheep descending from the former Egyptian sheep.

It seems to be a really old (4000 BCE) breed from the cradle of sheep domestication --Mesopotamia. It ended up in Central/Eastern Europe via north-Pontic steppes because of Thracians, at p.147 - emphasis mine:

Finally, there is a short discussion on paleogenetic research (pp. 146-7) but I am not knowledgeable enough to read (nor understand) so I'll leave that for someone who can.

NOTE: The author of this article is Condrea DRĂGĂNESCU (from University of Agricultural Sciences and Veterinary Medicine, Bucharest,59 Marasti, District 1, 011464, Bucharest, Romania). He has written quite a few articles on Corkscrew Wallachian. Another with specific discussion on taxonomy and the Corkscrew Wallachian is A note on Balkan sheep breeds origin and their taxonomy) (pdf). And this paper for the name Corkscrew Valachian (same author, pdf).

The linked source in the question disputing Hungarian origins for that breed is right to do so, but gets completely derailed in trying to establish a national Serbian tradition for 'inventing a sheep breed'. For claims of anything 'ancient' or even just 'medieval' regarding this breed, there is zero evidence.

The bulk of the evidence is that this was a widely dispersed regional breed appearing in early modern times across almost all of present day borders on the Balkan peninsula.

Go back far enough and it gets easy, you do not have to know much and you can't be wrong. And then it gets complicated.

We know the ancestors of racka sheep are wild sheep, or urials, originating and being domesticated somewhere in or around modern day Iran.

So that's the easy part, they came from the Middle East. The complicated part is presented in just assuming a form of national identity and special uniqueness, both for Magyars or racka sheep. The horns of a Racka are not unique!

𓃝 This "racka" is Egyptian and part of the name of the ancient god Chnum, "one of the earliest-known Egyptian deities, originally the god of the source of the Nile." Which now has still descendants in Sudanese sheep

While earlier there was an argument to assume descent from Egyptian sheep for Rackas, at the latest since 1922 this is no longer seen as plausible.

The is just parallel development and convergent evolution in domesticated sheep#; not uniqueness.

Various peoples living in the Carpathian Basin , during the conquest of the country, mainly kept copper sheep , pond , various crosses of the Roman sheep , and other local breeds. We distinguish two geographical groups of the Racka sheep: the plain and mountain (ridge) rack.

"The conquering Hungarians brought the racka sheep from their homeland, which is typically an ancient Hungarian animal, and nowhere else, except where the Hungarians lived and lived."
– László Gaál: "A magyar állattenyésztés múltja" (The past of Hungarian animal husbandry). Akadémiai Kiadó, Budapest, 1966.

That description has severe problems.

Origin And History Of The Breed
The wild sheep Ovis ammon Arkal from Southeast Asia is believed to have been the ancestor of the Hungarian Racka Sheep (MATOLCSI 1975). In spite of the fact, that BÖKÖNYI (1974) concludes that the Hungarian Racka ancestors were introduced into the Carpathian basin by the conquering Hungarians (9th-l0th centuries) the first archeological evidence originates only from the sixteenth century. The hairy skin of adult animals was suitable for producing sleeveless cloaks not only for the shepherds. the very nice and curly fur of lambs under two weeks of age was the custom tariff mentioned in the regulation of King Béla IV in 1255.

The meat and wool production of the breed was also important, therefore it seemed to be the dominant sheep breed of the country in spite of the lack of pure breed breeding in that time.
From the second third of the l8th century fine wool became one of the most profitable products in the Hungarian agriculture and therefore in both the big estates and small holders’ farms the breeding of Merinos was preferred (DUNKA 1984).
–– Istvan Bodo: "The Hungarian Racka", Animal Genetic Resources Information, 13, UNEP/FAO, 1994.

The projection of 'national' & 'breed' is not much more than a myth.

The network profile showed that sheep breeds from different geographic regions intermixed since the majority of the haplo- types were shared by individuals from different breeds across wide geographic regions. The haplotypes distribution did not indicate a clear phylogeographic structure. Different breeds from Asia (India, Indonesia and Mongolia) presented exclusively type A haplotypes, while breeds sourced from Europe (eight breeds from Austria, Balkans Region, Russia and Romania) possessed only type B haplotypes.

The Romanian Racka is characterized by an important genetic diversity […] The presence of A and B haplotypes within the population is in accordance with the findings for different breeds from Zackel group and with their hypothesized origins. The distribution of Racka in the haplogroups A and B followed the pattern observed for other breeds with different geographic origins. Thus, the presence of both typically Asian and European haplotypes might be the results of gene flow and introgression events that have occurred in the history of this breed. The analysis of mtDNA sequences was informative to assess the diversity within Romanian Racka, but not useful for establishing the accurate origin of the breed and its detailed relationships with other breeds. In order to have a clear image about Racka biodiversity, further large scale studies are necessary. The research should be extended for Racka sheep populations from neighboring countries by using a larger panel of molecular markers in order to investigate the sheep in the regional context and to develop a gene pool for conservation purposes due the fragile status of the breed. –– Andreea Dudu et al.: "Origin and genetic diversity of Romanian Racka sheep using mitochondrial markers", Small Ruminant Research 144 (2016) 276–282. DOI

Even the Hungarian currently ultra-nationalist Ministry of Agriculture approves in Conservation, research and development of our national values implied in our traditional farm animals are the hereditary rights and obligations of ours! >

This is the exclusive representative of the lowland Racka breed group. Its origin is controversial; however it has evolved in the Hungarian Great Plain for sure.

But this myth isn't very fit to really allow much build-up on it:

The current knowledge and documentation on the origins and relationship between Gyimesi Racka reared in Hungary and the Romanian Turcana is rather controversial. Lack of information and scientific reliable proofs for the divergent theories found in the two countries motivated us to implement a trial using molecular methods to assess the genetic distance and diversity in the two breeds. Hair follicles were collected from Gyimesi Racka (2 phenotypes) and from Turcana (6 ecotypes). The 599 bp segment of the D-loop region of the mitochondrial DNA was sequenced. Altogether, 42 haplotypes were identified, while 23 were found in both populations. Populations were highly diverse according to the haplotype and nucleotide diversity indices. AMOVA analysis showed that most of the variation was observed within populations (98%), indicating a weak genetic structure between the two breeds. Animals were grouped into seven groups based on their phenotype; however genetic distances among them were also low. Tajima's D, Fu's Fs, goodness-of-fit statistics, mismatch distribution and network analysis suggested recent demographic expansion. Current comprehensive mtDNA study indicates that there is very low level of genetic differentiation between the Gyimesi Racka and Turcana populations therefore they are de facto one trans-boundary breed.
–– Kusza S et al.: "Mitochondrial DNA variability in Gyimesi Racka and Turcana sheep breeds", Acta Biochim Pol. 2015;62(2):273-80. doi: 10.18388/abp.2015_978.

Every age had its own theory about the origin of the Hortobágy (Hungarian) racka sheep breed. In the Middle Ages Beloni (1553) spread the idea that it could have originated from the Cretan sheep, which became generally accepted in the 19th century. The change of approach took place at the beginning of the 20th century under the influence of Béla Hankó, who clearly denied that the branch of the Cretan sheep was an artefact, the centuries-old tradition of the Cretan shepherds to grow their sheep's horn in a straight line with leather straps (Hanko, 1937). Another view (Tänzer and Spöttel, 1922) is that the racka comes from the crossing of the ancient Egyptian hairy sheep and the long-tailed fatty-tailed sheep. Rohde (1879) was the first to consider the Hungarian sheep were brought along by Hungarians. According to archaeological findings, this view is currently not supported by material findings. The straight-shafted, dropped horns are only part of the archaeological finds since the 16th century, and become common since the 17th century. We currently know of a single skull that dates back to earlier times. Bökönyi (1974) mentions a sheep cattle among the findings of the crazy-ringhegy Avar cemetery, in which he writes: (the individual) "… but you have a zackelschaf, but full line of the horn cores cannot be reconstructed. Thus, belonging to the racka variety of the individual is questionable, because the bases of the horns are unfortunately too short to be able to infer about the full horns. Unfortunately, Bökönyi only publishes a photograph of the skull, not dimensions (Figure 1).

This work seeks to explore the morphological changes of the Hungarian (Hortobágy) Zackel sheep's skull, which occurred in the past 50–70 years. In this study, we compared individuals skull forms by geometric morphometric methods. The origin of the breed is not known, we do not know when entering the Carpathian Basin. Therefore, the comparison involved the only known early archaeological findings. We have shown that there is no difference between each period colour variations, but over time change has occurred in the skull formation of the breed.

Not the answer you're looking for? Browse other questions tagged ancient-history europe or ask your own question.

26
Who were the pre-Celtic inhabitants of Western Europe?
6
When, where and with what propagation through Europe did the idea of gypsies stealing children occur?
16
What were the thoughts of the Celts, Romans and other ancient European people about the standing stones which survive from prehistoric times?
5
Copper and Bronze Age Burials in Western Europe
0
When did flogging and other corporal punishments get abolished in Europe?
6
Where and when were air guns used in a major battle?
0
Where were there growing economies in dark age Europe, excluding Iberia and Constantinople?
1
From where did Aryans originate?