What was the name of the Ottoman-Spanish truce in 1580?

As I'm reading the history of the Western Mediterranean about this period, I found many references to a truce between the Ottomans and Habsburg Spain in 1580.

Philip lacked the resources to fight both the Netherlands and the Ottoman Empire at the same time, and the stalemate in the Mediterranean continued until Spain agreed to a truce in 1580.

After Spain had sent an embassy to Constantinople in 1578 to negotiate a truce, leading to a formal peace in August 1580, the Regency of Algiers was a formal Ottoman territory, rather than just a military base in the war against Spain

Looking at this box, it seems that the truce was observed. There is no major engagement in the Mediterannean until 1613, despite a lot of battles listed before 1580. Coincidentally, at this time the Ottomans were busy with Persia and Spain with the Dutch and England, so this truce must have been convenient for them. 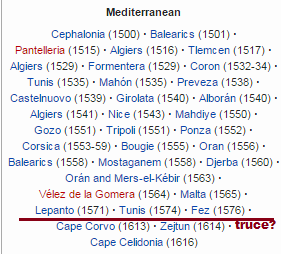 However I can't find any details about this truce. Is there a formal name for it? At what level was it agreed, e.g. was it agreed between the monarchs? What are the terms of the truce, were there any territorial exchange or delineation? Are there other arrangement (e.g. payments, promise to support or not support other powers)? And how long did it eventually last?

As noted in Alan G. Jamieson's Lords of the Sea: A History of the Barbary Corsairs 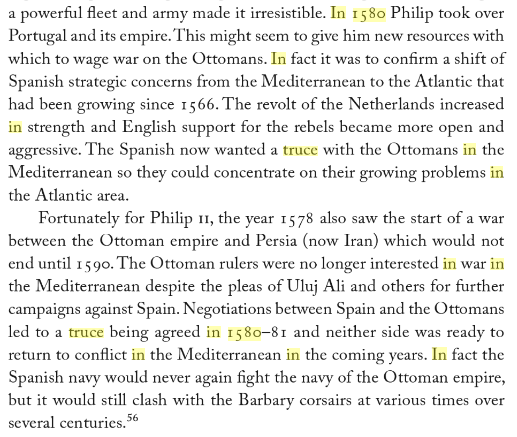 and confirmed here the truce of 1580 simply called an end to the fighting between the Spanish and Ottoman Empires that never resumed. There were never any official peace talks, and so no formal agreement on territorial concessions was ever negotiated.

The Ottomans were first occupied with a war against Persia (Iran) and then with an attempt from 1593-1606 to capture Vienna from the Austrians .

Philip II in turn became preoccupied with his attempt to subdue both the Dutch Republic and England that consumed hos attentions for the remainder of his reign.

This effective abandonment of the Western and Central Mediterranean by the navies of both Spain and the Ottoman Empire, combined with the gradual decline of both Venice and Genoa, led to the rise of the Barbary states, and their associated piracy. This would continue into the 19th century when the combined efforts of British, French and United States military forces subdued them.

Spain was fighting in two fronts. On the one hand, the netherlands want independence from Spain and the other hand Ottoman empire was unstoppable in eastern europe. The Christianity divided in two and Ottomans advancing.

At the end, was decided that spanish navy to join with italian states navy against Ottoman navy. The Spanish tercios will be concentrated mainly in the netherlands and in minor size against Ottomans. Most of spanish/hasburg kings were fed up with Christian countries because they dont join with him. More concentrate in attacking spain than join forces.

The Cost of fight in two fronts was highly. Normally, for both empires to make a peace.

Not to say that netherlands was spanish by heritage. Most of spaniards and tercios were so fed up to fight there because no matter how many battles will the tercios win, the dutch continue fighting. "Was a hell with no-end but the head of spanish government was stubborn to controll it". That neverending war provocked even internal rebellions in Spain.

Basque_SpaniardsBasque_Spaniards
5511 bronze badge
Add a comment  |
-1
Want to improve this post? Provide detailed answers to this question, including citations and an explanation of why your answer is correct. Answers without enough detail may be edited or deleted.

Empires of the sea by Roger Crowley: 'In 1580, Philips signed a peace treaty with the sultan... Based on Andrew Hess, The Battle of Lepanto Oxford 1972

Not the answer you're looking for? Browse other questions tagged spain ottoman-empire 16th-century mediterranean diplomatic-history or ask your own question.

7
What was the reason for the Ottoman invasion of Otranto?
10
Was there a Spanish plan to retake Malta, had the siege of 1565 been succesful?
13
What was El Greco's relationship with the Spanish Inquisition?
8
What does it mean: "French was a lingua franca in the Ottoman caliphal court?"
4
What do the four castles on the flag of Ibiza represent?
8
How was the Spanish Armada coordinated?
13
When was the Ottoman mosque within the Parthenon demolished?
8
What information would be contained on an Ottoman Tapu deed in the 1830s?
2
What was the relationship between Ottoman emperor Murat IV and his mother Kosem Sultan?
13
What was the status of Shia Muslims in the Ottoman empire?