Did Italian irredentists ever lay claim to the Swiss Canton of Tessin?

The Italian irredentists wanted all Italian-speaking regions to be annexed by Italy, most specifically parts of Austria-Hungary, and this is why Italy joined the entente during the Great War, in order to try to get those territories annexed. They partially succeeded, yet only part of their claims were annexed by Italy (they also claimed areas that are today part of Slovenia and Croatia).

Now my question is : Did the irreentists also have claims on the Swiss Canton of Tessin, which is also Italian speaking, and is today the biggest native Italian speaking community outside of Italy (if emigration doesn't count)?

Yes, it appears they did.

Wikipedia's caption on the map below reads:

Italian territory claims by Italian irredentism activists in the 1930s, including Nice, Ticino and Dalmatia in green, Malta in red, and later also claimed Corsica in purple 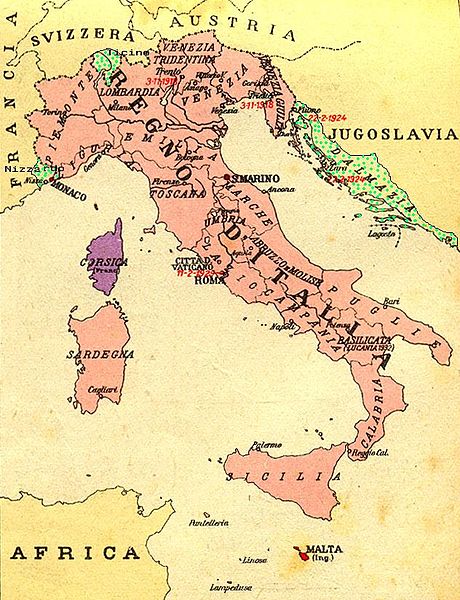 "Ticino" is of course the Italian name for what German-speakers call "Tessin".

How hard this was pushed is another matter though. I did find that Ticino was the source of rather a lot of unrest from the mid to late 19th Century*. Once Mussolini came to power, this got wrapped up in Republican vs. Fascist politics. The Fascists went so far as to stage a march on Bellinzona in 1934. However, they faded away to nearly nothing soon after that.

* - The overt political reasons are so buried in Swiss political minutiae that's it tough to imagine anyone caring, except to use them as a convenient pretense for separatism

Not the answer you're looking for? Browse other questions tagged political-history italy switzerland or ask your own question.

8
Why wasn't there French irredentism or pan-fransicm?

20
When and how did classic "Italian" cuisine come to be?
6
What did the end of the western front look like at the Swiss Border?
2
What happened to the Swiss troops in French service after August 10, 1792?
8
Why wasn't there French irredentism or pan-fransicm?
5
When the Swiss Guard was formed, was the height requirement 174 cm (5' 8 1/2")?
7
What kind of bullet did I find in Swiss glacial ice?
4
Are the Swiss flag and the flag/coat of arms of Piedmont related?
2
Why did Italian immigration to the US decrease from 1900s to 1920s?