Where did Roman senators mostly live in the time of Tiberius or Caligula?

My understanding is that under the Republic the Palatine was the most popular place for senators and their families, but from the time of Nero the Imperial family more-or-less took over the Palatine. In her book SPQR Mary Beard says that the elite families tended to move to the Aventine once pushed off the Palatine, but until the time of Nero were they mostly still based on the Palatine or were they spread out throughout Rome by this time?

The use of the Palatine by emperors began with the first emperor, Augustus, and progressed from there with more and more of it being taken over so we are probably not looking at a sudden 'exodus' but a gradual move to other 'well-heeled' districts of Rome which were preferably not too far from the senate.

Senators were mostly among the wealthier members of Roman society so they would have been able to afford to live in the prime real estate areas. But one important consideration was being on a hill to get away from the noise and city smells (and avoid flooding) so some senators may have lived on high ground on the outskirts of Rome. 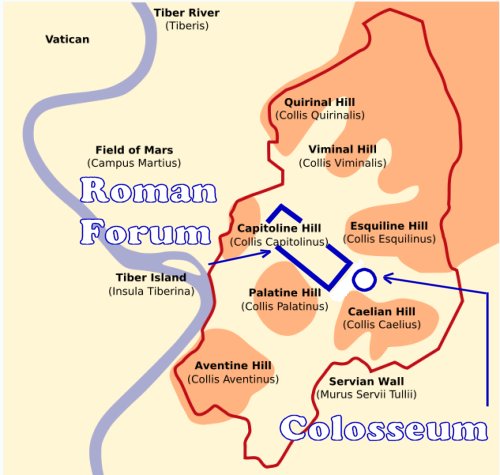 As well as the Aventine mentioned in the question, the Esquiline would also have been a desirable area for senators (though Nero cleared areas). According to data collected on domus, the Quirinal was possibly even more popular with the wealthy, among whom there would quite likely have been quite a few senators. A qualification though: this data covers both the republic and the empire so one should not draw any firm conclusions from this data. Some senators also had country estates which they could retreat to - these estates being in addition to a house in the city.

Floods of the Tiber in Ancient Rome by Gregory Aldrete

Information relating to where exactly the senatorial ranks of Rome lived during specific reigns is somewhat hard to obtain, but I would venture to say it is likely that senators stayed on the Palatine hills as they did not necessarily have any reason to leave.