Why didn't the Allies wait for the nuclear bomb before invading Normandy?

Congruent to the argument that dropping the bomb on Japan saved US and axis lives.

Developing nukes was a hedge against someone else getting them first. No military operation would be held up for the bomb.

In particular in the spring of 1944 the atomic bomb was still a ways off, but it was still not known how long that would be, or if it would work. Thin Man, a gun-type plutonium bomb, wasn't working out. The simpler Little Boy required uranium in quantities only available in August 1945 for a single bomb. The more efficient, but more complex, implosion device Fat Man remained untested until Trinity in July 1945. Delaying the land invasion of Europe for an untested device which wasn't yet ready was not even considered.

The invasion had to happen as quickly as possible for other reasons.

The Western Allies were already fighting in Italy. Delaying the invasion of France meant that fight would be left unsupported. It would leave dozens of fully-equipped US divisions sitting around on the British Isles doing nothing.

The invasion relied on surprise, and every day that went by meant another day that the timing and landing site could be compromised.

Every day that went by also meant the Germans could pour more concrete, plant more mines, and generally strengthen their Atlantic Wall defenses.

Despite Allied advances in the Battle of the Atlantic, U-Boats remained a threat. An invasion of Europe would cut off their bases on the western coast of France. Waiting a year meant more shipping sunk.

Meanwhile the V-1 and V-2 were known to be coming, bombing could only delay them. The launch sites were in Northern France and on the Dutch coast and the introduction of mobile V-2 launchers made stopping them by bombing difficult. Once launched, a V-2 could not be stopped. A goal of the invasion was to overrun these launch sites.

To add urgency, the Germans had plenty of things nastier than explosives they could load into the V-2. Radioactive material, poison gas, chemical and biological weapons. They could use the V-2 to rain destruction down on Britain. In 1944 Germany still refused to use such weapons, but it was not known how long they would restrain themselves in the face of the advancing Soviets.

Then there's the Soviets. They had been asking for a second front for years and were not happy with merely an invasion of Italy. To delay further meant further straining the alliance. A delay might mean the Soviets would seek a separate peace with Germany, and Germany could then turn its full might to defending against invasion. 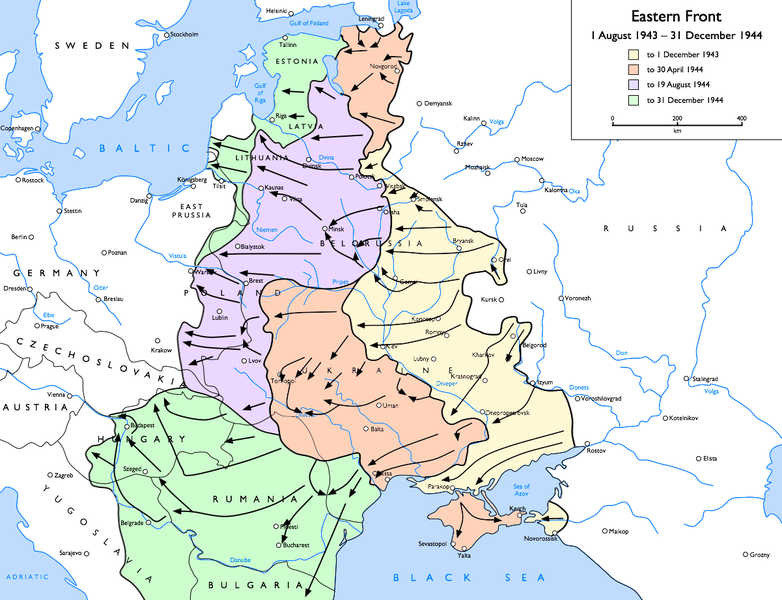 As much as they pretended to be allies, the US and particularly Britain did not trust the Soviets. The Western Allies were afraid of a victorious Soviet army overrunning all of Germany and possibly Europe. The Western Allies had to be part of the race to Berlin.

For one thing, the atomic bomb simply wasn't needed in the European Theater. The reason it was considered a superior choice over a land invasion in the Pacific is largely cultural. The Japanese culture at the time valued honor over life, meaning that a good death was preferable to surrender or capture. Had the US attempted a conventional invasion of Japan we would have likely found ourselves fighting not only the military but the citizenry. Choosing to fight and die instead of surrendering to the invaders, virtually all civilians would become a threat resulting in massive casualties on both sides. The use of atomic weaponry was seen as a better alternative, reducing axis casualties and all but eliminating allied casualties.

In Europe, by contrast, much of the land being taken in France and Belgium was being liberated from the Germans. As such, allied forces were greeted largely as heroes by locals, and were even joined by local resistance groups such as the Free French Forces. This, along with the participation of the USSR (who likely would have joined in an invasion of Japan as well) meant that atomic weapons were not really necessary in Europe. In addition, the opening of a Western Front in Europe was considered a priority in order to divert German resources and relieve pressure on the Soviet Union, therefore there was not time to wait for nuclear development. (Credit to @Merkava120 for reminding me of this last reason.)

The timetable was settled at the Tehran Conference late 1943, the first meeting of the "Big Three" Allied leaders. Once Hitler invaded the Soviet Union in 1941, Britain, and later the US, gave support to the USSR. Stalin had been strongly pushing for a Western Front to be opened up and at the Tehran Conference the US and Britain committed to launching Operation Overlord in Northern France by May 1944. Obviously it was slightly delayed but that was the timetable decided upon. The Soviets also planned an attack of their own to occur at the same time for maximum effect.

The atomic bomb didn't really factor into their plans since it's tough to, essentially, rely on a scientific breakthrough when you're drawing up battle plans. Can't really draw up advanced battle plans around something that didn't exist at the time though if it was ready before D-day I'm sure things would have been completely different.

In the case of Japan, the U.S. had completed (and tested) the A-bomb about the time that they were ready to invade Japan. That made it an "either/or" option that President Truman was fully aware of.

In the case of Normandy, the U.S. was ready to invade in June, 1944, but the status of the bomb, while in progress, was uncertain. In fact, its completion was about a year away, few people "knew," and the ones who knew the best weren't telling others in the military, or elsewhere in the chain of command because of "need to know" issues; even President Roosevelt barely knew, and then not "for sure." That said, the Americans went about their business in 1944 as if the bomb were not an eventuality.

Not the answer you're looking for? Browse other questions tagged world-war-two nuclear-weapons strategy or ask your own question.

8
When was General Douglas MacArthur made aware of the Manhattan Project?

44
Why didn't the US choose to demolish Tokyo with an atom bomb?
25
How many lives were estimated to have been saved by the Hiroshima and Nagasaki bombs?
43
Why didn't Britain's nuclear weapons deter Argentina from invading the Falklands?
2
Did the atomic bombing of Hiroshima and Nagasaki contribute to Japan's surrender?
13
Why didn't Hitler invade Middle East for resources first before invading Soviet Union?
5
What were the plans to use the atomic bomb if it had been in time for the war in Europe?
32
What was the plan for an abort of the Enola Gay's mission to drop the atomic bomb?