When did the U.S. Postal Service completely transition from horse-drawn to motorized transport?

Simple question, hopefully not too broad.

When did the USPS stop using horses & horse-drawn carriages for most of its transport and delivery?

Were there any private competitors (such as modern-day UPS and FedEx) in operation at the time that this transition was taking place, and if so, who was leading and who was following in the transition?

The United States Postal system began Rural Free Deliver (RFD) in the late 19th century. This program mandated to postal service deliver mail directly to rural families and greatly increased the cost and complexity of mail. Prior to this mail was mostly delivered to central locations and individuals were responsible for traveling and picking up their own mail. Some places individuals had to travel for days to collect their mail. RFD would begin to change that.

Wikipedia:Rural Free Delivery
The United States Post Office Department began experiments with Rural Free Delivery as early as 1890. However, it was not until 1893, when Georgia Congressman Thomas E. Watson pushed through legislation, that the practice was mandated.2 However, universal implementation was slow; RFD was not adopted generally in the United States Post Office until 1902.

This is pertinent to your question because RFD opened up the Postal service to hire tens of thousands of new postal carriers. These carriers were initially responsible for purchasing and maintaining their own transportation. Initially this meant horse and buggy and I came across many advertisements for specialized carriages catering to RFD mail carriers even as late as 1910. All these adds given be low mention RFD mail carriers and target them as potential customers. 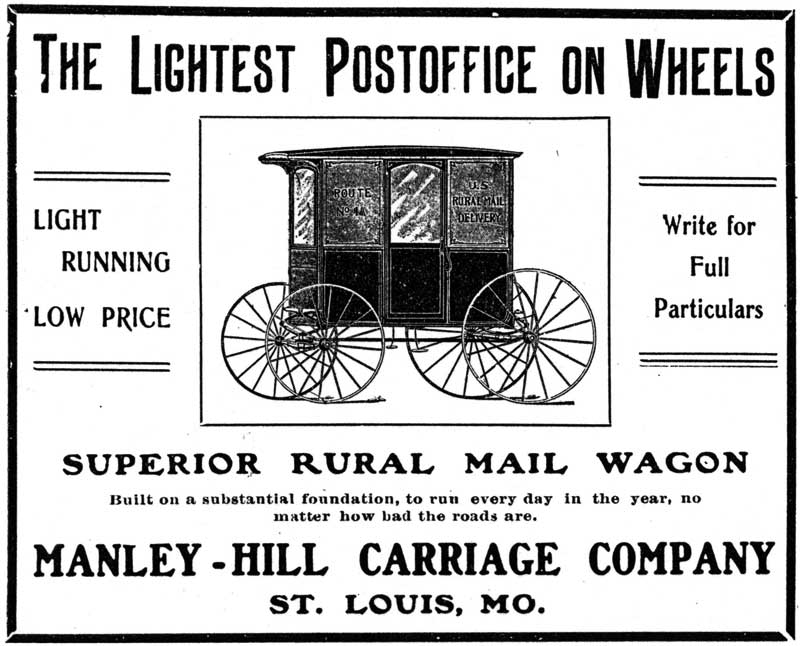 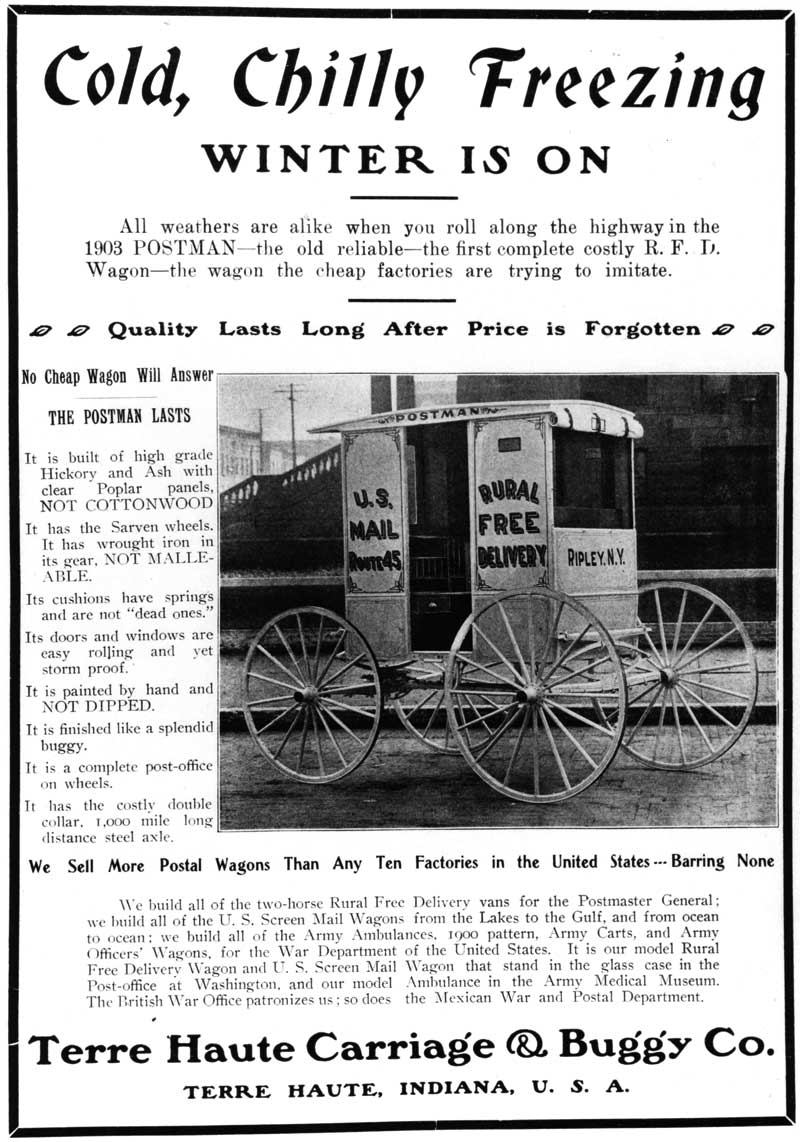 Around 1905-1915 these advertisements began to show motorcycles and automobiles. A carrier on a motorized vehicle could deliver much longer routes faster than one on horse. Automobiles were quickly(over years) preferred.

I found many many adds from 1910-1915 for motorcycles and automobiles targeting R.F.D. carriers. It was kind of like a boom cycle for manufacturing. 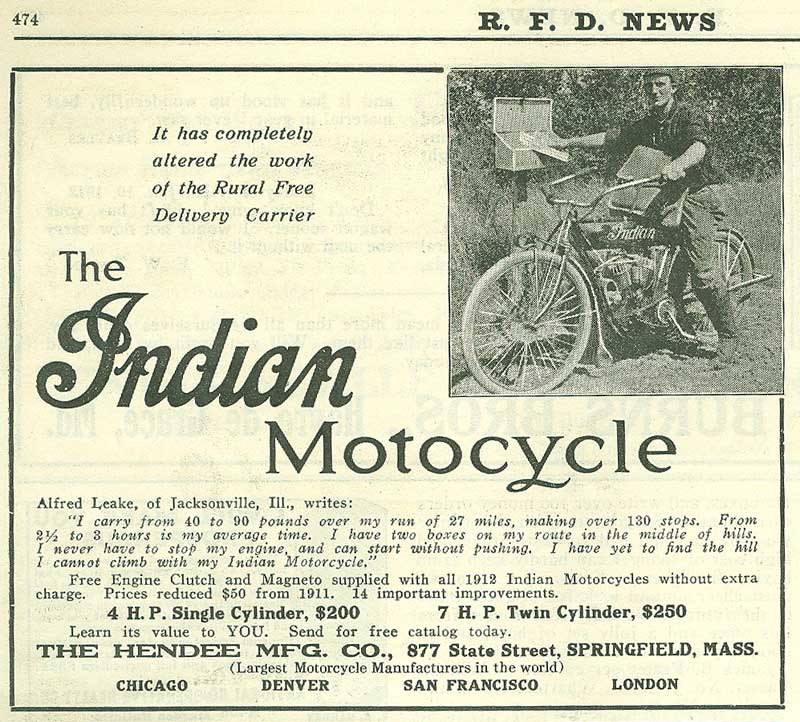 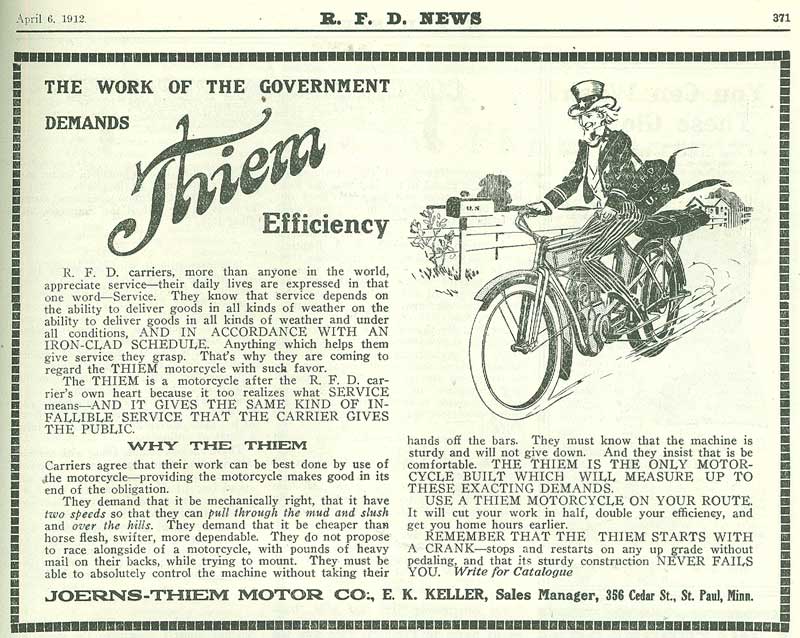 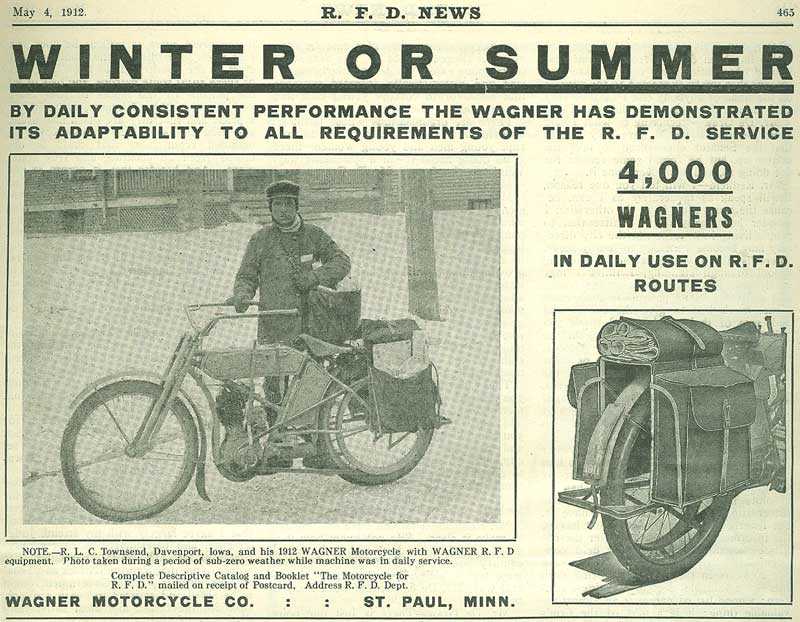 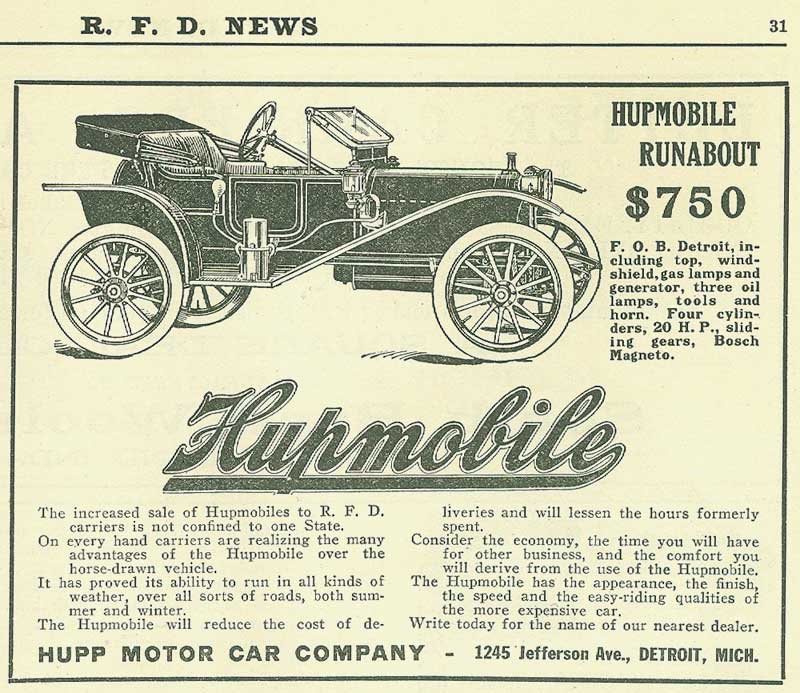 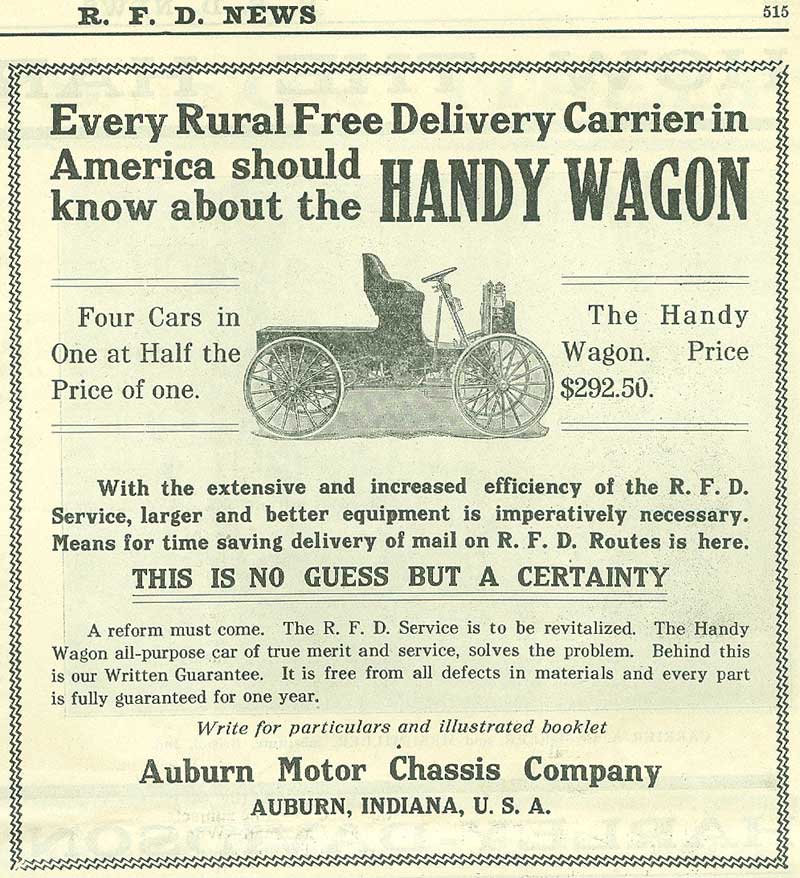 By 1920 the postal service was providing the vehicles and the United States Postal Service had the largest civilian automobile fleet in the world.

So that would be my answer.. while the Postal Service has never actually entirely gotten away from horse / mule delivery (see be low); by 1920, after WWI they had mostly transferred primary delivery to automobiles and motorcycles. Prior to that 1905-1915 they were relying on postal workers to purchase cars for their own use. By 1920 the postal service was sold on the utility and the technology had become reliable enough that they were investing in their own fleet of automobiles.

Some of the USPS mail is still delivered by horseback. In the year 2000 CBS news did a story on a USPS subcontractor named Charlie Chamberlain, who along with a dozen others delivers mail daily to an indian village at he bottom of the grand canyon.

CBS News January 30, 2009,
Charlie Chamberlain is still delivering mail by mule train, three hours one-way, every day, to a small Indian reservation 3,000 feet down on the floor of the canyon.

"This is the most reliable way to get the mail and these supplies down there. And we can do it for less money," Chamberlain told Geist. "And also, we can go in all types of weather."

"A helicopter can't always fly on these rims. This wind gets to blowing out here sometime. You can't fly in them high, high winds," he added.

Not the answer you're looking for? Browse other questions tagged united-states transportation contemporary-history postal-history or ask your own question.

3
When was federal sovereign immunity in the U.S. established?
26
When did Americans become safe from highway robbery?
9
When did the Taxi become associated with the checkered pattern?
31
How did people deal with ice on the roads during the horse-and-buggy era?
11
When did covered wagons disappear from America?
4
When did the key advances in vehicle suspension happen?
11
Who advised FDR on foreign policy before and during WWII?
12
When has the U.S. refused to pay its debts?
9
When did the last (non-tourist) commercial stagecoach line run in the USA?