Why was Luodian important in the Battle of Shanghai?

In the middle of the 3-month long Battle of Shanghai, the small town of Luodian on the outskirts of Shanghai saw some of the heaviest fighting. After Japanese troops made successful amphibious landings along the northern coast, many Chinese troops fell back to Luodian, and over a 10-day period the town was heavily contested and changed hands multiple times.

It's clear from many facts that this town was strategically important, but it's not clear why this is so. Consider this map (actually I couldn't find a good map, so Google Maps would do fine too): 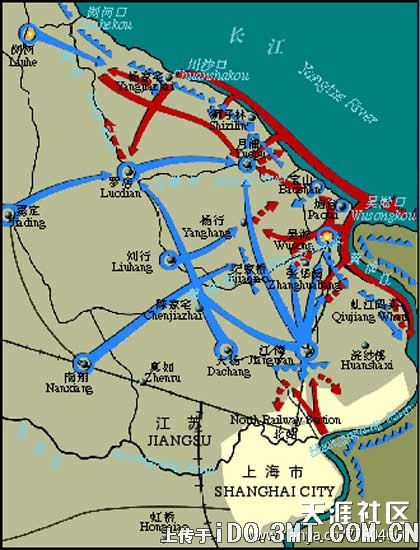 So I can't see why Luodian was so important, given its poor (apparent) strategic value and defensibility. And yet both sides considered it important and fought hard for it:

Luodian was a centrally-located transport hub between Shanghai CBD, Baoshan, Songjiang, and Jiading. Holding Luodian was vital to supporting the Chinese position in the whole region. Conversely, losing Luodian seriously threatened to undermine the whole front, since Japanese forces could strike at the heart of the Chinese forces via the roads from Luodian.

In addition, Luodian was squarely on the path to the Shanghai-Nanking Railway. If the Imperial Japanese Army took Luodian, this vital rail link would have been directly exposed. The National Revolutionary Army fighting in Shanghai would be at risk of being cut off and encircled.

For these reasons, Chinese forces hunkered down to defended the countryside surrounding Luodian even after the town was lost. However, the numbers you cited strikes me as a high overestimate; unless it included other Japanese units fighting in the region, in an effort to link up with Luodian and thus outflank the Chinese position in Shanghai.

"Possession Luodian would mean control of part of the road south to the town of Dachang and, a little further along the same road, Shanghai proper. Luodian also straddled the road to Jiading, a major town five miles to the west, which in turn was the gateway to the city of nanxiang, close to the strategically vital railway line connecting Nanjing and shanghai."

The German General Falkenhausen certainly knew his shit. He foresaw how the defense of Luodian could in turn defend the larger more important cities by slowing the movement of the Japanese. Similar to the civil war like @T.E.D. mentioned, little towns can the sites of huge strategic logistical importance if they are situated near a mobilization resource, in this instance strategically important roads.

I found a somewhat better map, showing the major roads leading out of Luodian: 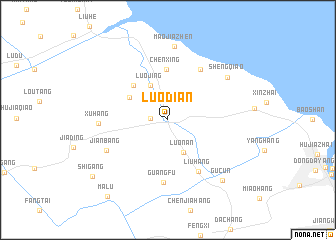 Here you can clearly see that Luodian is a transportation hub; it is at the crossroad of two roads: Jiading-Baoshan, and Liuhe-Dachang. The key point is that this crossroad straddled the entire northern beachfront. The Japanese had made landings at multiple locations from Liuhe to Baoshan; taking Luodian would mean they can easily consolidate their landing forces there by using the roads leading from the coast. In this sense Luodian is somewhat analogous to Caen or Saint-Lô in the Battle of Normandy. It was also important to the Chinese as they can use the roads to transfer troops between Luodian, mainland reinforcements via Jiading, and downtown Shanghai via Dachang, forming a defensive line that protected the all-important Jinghu railway.

Jiading, one end of the crossroads, was a large town that stood between Luodian and the railway. Even more important was Dachang, and after Luodian was taken, the Japanese followed the road to Dachang, but not before heavy fighting on the Yunzaobin River, which ran between Luodian and Dachang.

Wikipedia mentions several locales that Luodian connects. Without qualification, some of these seem redundant:

Not the answer you're looking for? Browse other questions tagged 20th-century war japan china battle or ask your own question.

12
Why does the map of Jordan look as it does?
31
Given their reputation for fighting to the last man in the Pacific, why did 700,000 Japanese troops surrender in Manchuria?
10
Why did Japan take so long to attack Wuhan?
46
Why did English adopt Kamikaze (神風) as a loanword instead of Tokko (特攻) during/after WWII?
6
Did Mao Zedong and Chinese communists collude with the Japanese during the Sino-Japanese War?
11
Why did the British take Hong Kong instead of any other of the later treaty ports?
1
Why didn't the Chinese attack Hungnam during the evacuation?
10
What was the significance of the BEF moving into the gap between German forces in First Battle of the Marne?