What did the people of the Middle Ages call their period?

It's clear that Middle Ages is a term from the Renaissance. My question is:

What names did scholars use during the Middle Ages for their own period?

Well, of course Middle Ages is a single name for a very heterogeneous period that covers approx. 1000 years, so different periods of the Middle Ages might have different names and, of course, in the same period many names could have been used by different people, so every name is welcome and wanted.

edit: I know this is a broad question, but I don't think it's too broad. I don't want a comprehensive list, I'm just curious about any names you can remember :)

Mr Durden got the basic idea. Most medieval historians were just compiling annals of their realm or diocesis or abbey and didn't think far beyond that. The historians who were trying to come up with schemas and narratives mostly came up with separate ones and used separate names for their then-present era. To add to the two that he mentioned, though, there are two more important templates that were set up by Fathers of the Church.

Many of the medieval historians would've been familiar the Four Ages of Hesiod (fl. 700 BC) whose Works and Days included a section on the ages of mankind, tracing its fall from

This work survives in hundred of medieval manuscripts and influenced any capable medieval historian either directly or through the simpler copies sketched out in Vergil's Georgics, Ovid's Metamorphoses, & Boethius's Consolation of Philosophy. They all essentially adopted similar formats, Christianized to fall from the paradise of Eden, through a silver age among the Patriarchs, a bronze age among the heroes of the Old Testament, a heroic age when the Savior walked the Earth, and a horrific fallen age now... with the heroes becoming saints and the redemptive coda that the gospels and St John's Revelation promise Christ's Second Coming and the creation of a New Jerusalem. 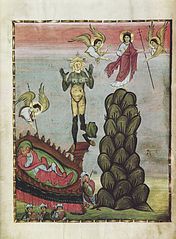 St Jerome (c. 347–420) translated Eusebius's now lost Chronicle from Greek into Latin, and Wikipedia and all its spawn claim somewhere in it he dated the five ages to 1710 to 1674 BC, 1674 to 1628 BC, 1628 to 1472 BC, 1460 to 1103 BC, and the Iron Age from 1103 BC to present. I can't find that in his Chronicle at all; it's just a 5th-century version of the Timetables of History without much commentary or division into ages. On the other hand, he worked from Hesiod's template (probably via its gloss in Dicaearchus's well regarded but lost Life of Greece) for his commentary on Daniel's vision of the statue with the clay feet, producing the influential interpretation that the golden empire was Babylon, the silver Media & Persia, the bronze Greece & Macedonia, and the iron Rome.† With Rome falling to pieces and defended by the barbarians, the rock which destroys it and fills the world would be Christendom and the end of ages was nigh.

* This sounds less out of place in the original text, where Hesiod is actually talking about a succession of races of men rather than historical ages. Ovid already saw the schematic problem you're noticing now and just rolled the Heroic Age into Hesiod's Bronze Age, making everything nice and metallic. Vergil skipped the names and divisions and just traced man's fall from paradise into labor with iron tools, close enough to the Genesis account to earn himself his medieval reputation as a white mage and a place as Dante's companion through Hell and Purgatory.

† This interpretation had already appeared in some Jewish literature like the books of III Baruch and II Ezra, both of which Jerome excluded from the Vulgate as apocrypha. 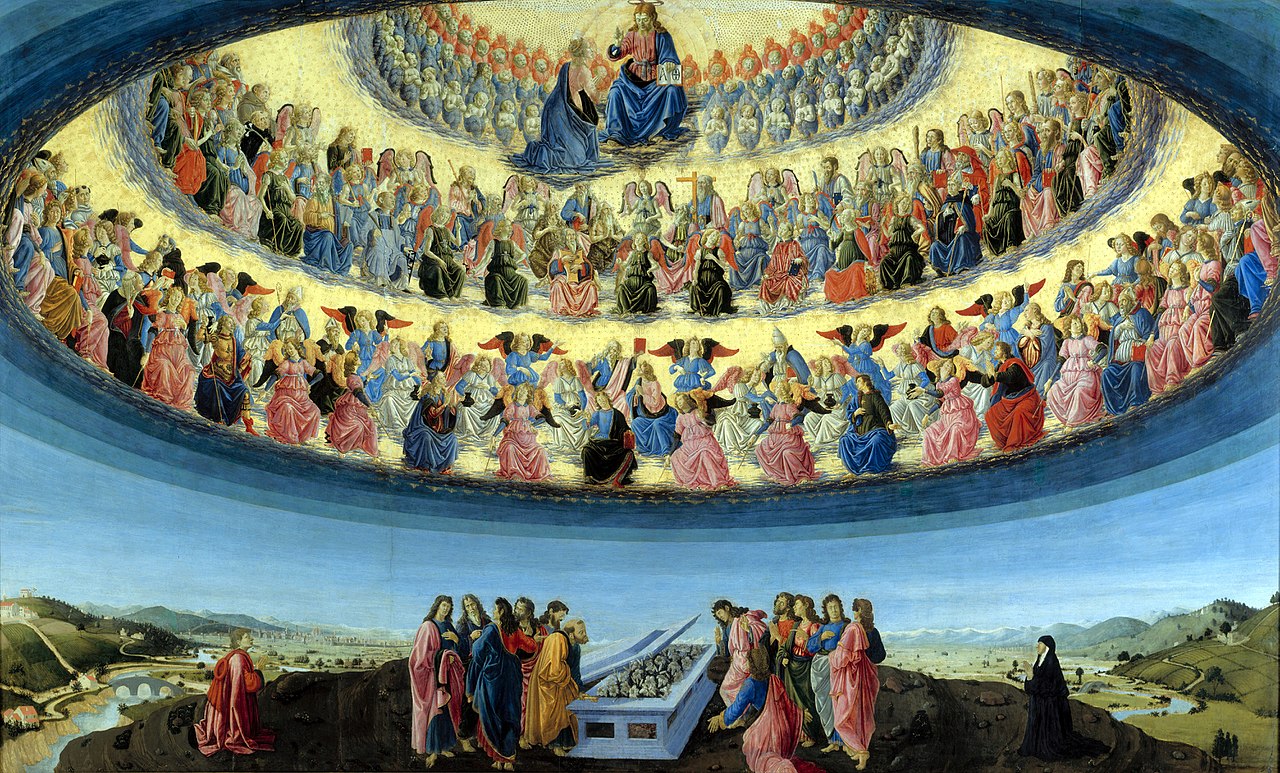 Medieval European historians would've been still more familiar with the Six Ages of St Augustine (354–430). Looking at the comparative tables being created of Hebrew, Greek, Roman, and Egyptian history by scholars like Jerome, Augustine sidelined them to suit his redemptive Christian narrative rather than to place Christianity into a Greco-Roman context. In his booklet On Catechizing the Uninstructed, he patterned the ages of mankind after the seven days of Creation in Genesis, taking the central divisions from Jesus's genealogy in Matthew:

This Sixth Age—like the many ironically humble aspects of Jesus's own life—was considered a time of material collapse which only serves to heighten its spiritual triumph, a time when the soul leaves behind the things of this world, remaking the mind in the image of G-d as during the Sixth Day of Creation G-d made our bodies in His image. (Pre)millennialists were a major force in early Christianity and many before and after Augustine—and young Augustine himself—felt there would be a thousand-year reign of Christ on Earth based on a passage in John's Revelation. Older Augustine being the temporal genius that he was, his understanding changed and carried most of the rest of Christendom along with him until the Reformation. The Seventh Day of rest was not a next step along a timeline but the reunion of mankind with a G-d who has existed alongside and beyond all time the entire time. 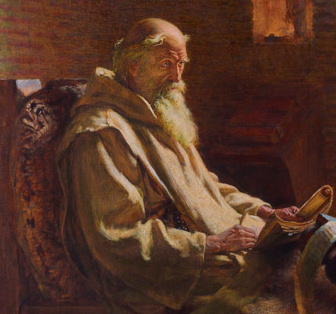 Bede (c. 700) followed after this in his book On Reckoning Time, which was widely copied and became the medieval authority on figuring dates, especially the Easter calculations. The first Christians had thought Christ was coming back within their lifetimes; others after the destruction of the Second Temple; still others including Irenaeus around the year 500 because they interpreted various scriptures as indicating Augustine's eras were 1000-year spans except the last, which would take half as long; and a fourth set including Beatus around the year 800. Without addressing any knowledge of the timing of the End of Days, Bede followed Augustine and disarmed the last group by pointing out that the Septaugint dating that it was based on, which placed the Creation around 5000 BC, was off by thousands of years from the information in better translations of the Old Testament. By Bede's age, one of the Irish monks had figured the discrepancy as 1257 years. Bede also compared Augustine's ages of history to the stages of life (infancy, childhood, adolescence, youth, maturity, senility), put exact dates on them from both the Septaugint and Hebrew chronologies, and tacked on a 7th & 8th age of an eternal sabbath and Christ's resurrection, rather misunderstanding Augustine's point about the utter timelessness of eternity. Some of his preference for "Hebrew dating" was resisted at home and abroad for chauvinistic reasons, but his & Augustine's other point that passages in the Bible (e.g. Mark 13:32) explicitly reserved the knowledge of the End of Days to G-d the Father became accepted dogma, ending official use of the age of the world to date its end until the revival of forms of the idea by the Protestants during the Reformation and the Evangelicals more recently.

What name did people use during the Middle Ages for their own period?

More often than not, even when they accepted that the Day of the Lord would come as a thief in the night, they felt themselves to be in some version of the end times.

Erasmus in his work Ratio Verae Theologie (1519) divided the history of the world into five ages:

where the time since the Vikings (850 AD) is the current age, being a time of secular kings who have "degenerated" away from Christianity in the view of Erasmus.

Note that both schemes vaguely imagine an unnamed pre-Biblical age where marriage was unknown, a sort of "pre-God" period in which the earth was populated by heathens.

Longer answer: "The date in the dating system used in their time and place. Or so many thousands of years since the biblical creation of the world. For example the Medieval Jewish calendar dated the creation to 3761 BC, and the medieval Byzantine calendar dated the creation to 5509 BC. Thus a Byzantine Christian and Jew could disagree about the age of the universe by 1,748 years.

21
Where did the term "Middle Ages" come from?
4
What did people of the middle ages call their periods?