What was the earliest known written constitution?

I was reading Wikipedia today, specifically the Constitution of Medina article and it states:

This was the first written constitution in the history of the world.

With two book references (that I'm unable to access, unfortunately). This seemed a tad late to me (622 CE), so I found the History of Democracy article and the Constitution article, which lists several constitutions prior to this, written and unwritten.

I found this surprising, and was wondering if there is major dispute about which came first and which is considered by historians to have been the first?

The use of this so-called "constitution of Medina" is purely modern and has no historical usage at all. Originally, the document referred to was called a "treaty". It was not even called a charter until the 20th century. It has never been called a "constitution" by any English-speaking historian ever so far as I am aware.

The first "constitution" was the Britannic Constitution created by the Coronation Oath Act in 1689 after the Glorious Revolution. The origin of the term can be found in the first paragraph of the act: 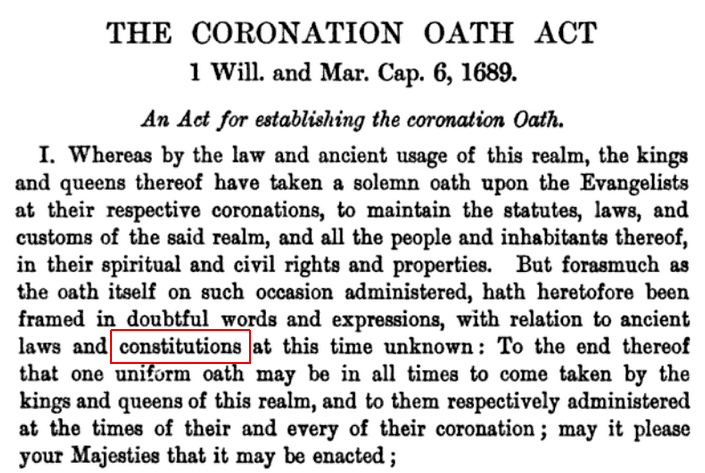 In the wake of this deal between the English parliament and the Dutch stadtholder William, a number of English legal theorists devised a body of supposed law and "rights" which they termed the Britannic Constitution, which was essentially the creation of the idea of a "constitutional monarchy". When the American colonies of Britain revolted they devised their own articles of state which they likewise called a "Constitution" and subsequently also devised a "Bill of Rights" named after those articles which were already established by English parliamentary law and theory.

Since that time, innumerable countries have fashioned "constitutions" in imitation of that of the United States.

To call old bodies of laws like Hammurabi's Code "constitutions" would be anachronistic.

The Athenian Constitution's earliest origins may date to Solon-(circa 600 BC/BCE) and Sparta's Constitution dates to Lycurgus-(though I don't have the approximate date).

I believe the Instrument of Government for Commonwealth of Britain, Scotland, and Ireland that established the Protectorate of Oliver Cromwell is the first example of a document that relatively comprehensively sets forth the structure and powers of government for a Nation State. I'm willing to accept San Marino, although it's hard to consider it a nation state. And we should never forget the written Constitution of the Republic of Corsica, which is a clear forerunner to the US Constitution.

Not the answer you're looking for? Browse other questions tagged law constitution or ask your own question.

23
What was the legal framework in Ancient India?
17
Were any drugs (except alcohol) forbidden during medieval or ancient times?
2
Do authoritative Jewish historical records record the expulsion
8
How was the lower chamber of the Japanese Imperial Diet elected under the Meiji constitution?
12
How were new states admitted to the Union?
3
History of ways of choosing members of the electoral college
21
What is the history of the university asylum law?
10
Why was the wording on war in Japan's postwar constitution so much stronger than in Germany's or Italy's?
8
Were Draco’s laws particularly “draconian” at the time they were enacted?