Can anyone tell me what style of sword this is?

Can someone please tell me what style of sword we are looking at here?

What you have there appears to be a Moro Kris, or Kalis. It is a type of short sword or long dagger that used to be common in the Muslim (aka: Moro) parts of the southern Philippines. 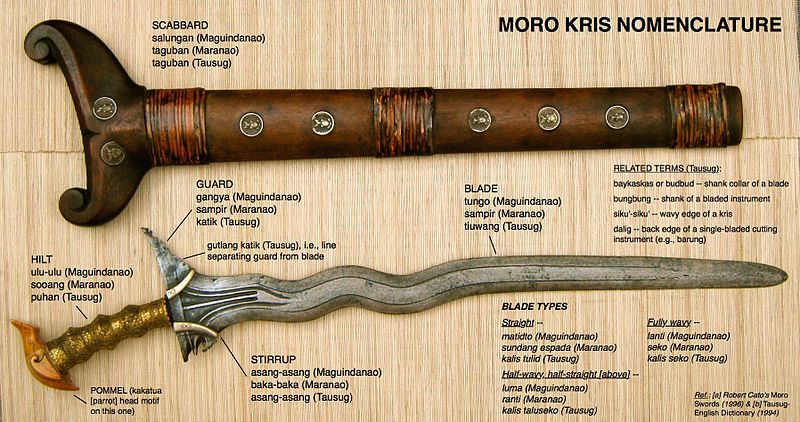 In the southern Philippines, the kris provided the Muslim armies with their counterpart to the Spanish weaponry. During the Philippine–American War, the death of American soldiers at the hands of kris-wielding Moros and other Filipinos armed with blades led to the creation and use of the Colt M1911. During World War II, the kris were accompanied by other Moro swords such as barongs in the insurgency movement against Japanese occupation.

Now the Kris is actually used in a lot of places in SE Asia. However, that style of scabbard marks it as most likely Philippine:

The Moro kalis scabbard shares many common characteristics with their Malay cousins, but are unique in their own style and form. Scabbards tended to be made of wide grain native hardwoods (e.g. mahogany, teak, narra, etc.), and lashed together with rattan bindings.