What is the band beneath Nefertitis crown? 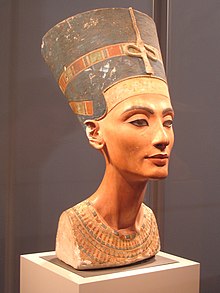 I'm sure I read somewhere that the yellow band at the bottom of the crown was a sweatband and not part of the crown itself. Is this true?

Would this be linen that is wrapped around the forehead and then the crown placed on top?

I have seen artists renditions of Nefertiti which show the band in gold but I assume this is artistic licence?

I've been asking around the people I know who have studied Egyptology, and I think that landofpyramids.org have got it wrong on their Crowns of Egypt page.

The Modius is a type of flat-topped cylindrical headdress. It is used in art from the ancient Egyptian and Greco-Roman worlds. An example can be seen in this bust of Serapis. The term "Modius" is actually just one given by modern scholars based on its resemblance to the jar used as a Roman unit of dry measure.

That being the case, it seems that the term would be quite inappropriate for Nefertiti's crown.

As far as I can see, the term most-commonly used in the literature for Nefertiti's headdress (on this statue and in other artworks of the Amarna period) is simply "flat-topped crown", for example in this article titled Nefertiti's Regality, or this one describing a Dyad of Akhenaten and Nefertiti from Tell El-Amarna.

In fact, whatever label we assign to it today, this headdress seems to have been particular to Nefertiti:

By the time of the move to Amarna, however, Nefertiti was portrayed in an original headdress peculiar to her ... this flat-topped blue helmet would become her hallmark.

There are suggestions that the crown may be based on the Blue Crown of the king, or perhaps on an earlier version found in representations of Queen Tiye (wife of Amenhotep III and mother of Akhenaten).

Tiye can be seen portrayed as a sphinx wearing that headdress in a relief from the Nubian site of Sedeinga and also on a carnelian bracelet plaque in The Metropolitan Museum of Art [Arnold, 1996, p107].

As for the band at the bottom of the crown, it is generally interpreted as being a part of the crown itself, rather than a linen cap to be worn under the crown or a sweatband of some kind. Descriptions of the crown mention a gold "frontlet" and corresponding "back-band" (in addition to the gold Uraeus). For example, in her book, The Royal Women of Amarna, Dorothea Arnold describes the headdress thus:

The queen wears the tall, flat-topped crown, which is painted dark blue and has a multicoloured band encircling it. Gold is indicated by yellow paint at the edges of this band and on the frontlet and correlated back band of the crown; the Uraeus is also painted yellow.

So it seems the artist's renditions you saw were probably correct.

According to Crowns of Egypt, this is "The Modius" and

was a type of flat-topped cylindrical headdress or crown of various sizes usually worn by queens or goddesses. A small modius was also used as a crown base for the headdresses of male and female gods.

6
What were Egyptian rulers called before the honorific title "Pharaoh"?
5
Egyptian funeral procession: what are these people doing / holding?
20
What names did the ancient Egyptians give to different stages of their history?
7
What’s this odd hat/crown and is it related to Baal?
2
What is under the Great Sphinx of Giza?
4
What is the meaning of this phrase in chapter 64 of the Book of the Dead?