Actually, West Virginia includes parts of south-west Virginia, basically all the counties south of Kanawha County in WV. At one time the new state would have taken in the Shenandoah valley also. The state of West Virginia was made arbitrarily and not on county loyalty, as you can see in this map of the West Virginia counties that voted for the Confederacy.

At the constitutional convention Mr. Van Winkle explained his reasons for including Confederate counties in the new state. 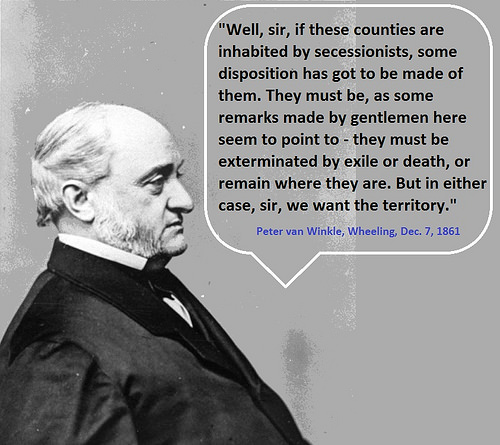 Not the answer you're looking for? Browse other questions tagged united-states american-civil-war or ask your own question.

5
What are exceptions to the hypothesis that "climate determined "regional" loyalties in the U.S. Civil War"?
6
How good were Confederate resupply capabilities during the Gettysburg campaign?
11
Why did Virginia let Kentucky become a separate state?
5
Why did the American South agree to the compromise of 1850?
3
Why is Jackson's valley campaign considered a Confederate victory?
9
What defenses did Lee leave behind when the Army of Northern Virginia left for Gettysburg?
23
What were the criteria for class ranking at West Point prior to the Civil War?