We've all seen guards in movies walking around with full plate mail, clunking with each step.

Now, I know that plate mail was much more mobile, and much less heavy, than movies and literature imply. But what about the fatigue of wearing that armor for long lengths of time?

How long did guards wear their armor, and how much did they wear? (especially compared to troops and other people of the era).

If there is such an applicable distinction.

Were there different "levels" of guards? Such as light patrolling guards, but a few heavier guards in reserve?

As for the specific era: I'm looking for general information, so anything with swords, shields, and armor is acceptable. You'll know the appropriate bounds on timeline better than I.

Thank you for your time.

Normally I would flag a question like this as too broad since it does not define a time period or place.

Nevertheless, here I think we can answer the question by dispelling the misapprehensions you seem to have:

(2) It was very expensive and used only by the elite (knights and above).

(3) No "guards" wore plate armor unless someone was so important as to be guarded by knights, which might be, say, a king

(4) Even if a knight were to guard a king, it would be unlikely he would do so wearing plate armor

I think it worth noting that the armor suit below was made for King Henry VIII around 1544, when he was old, overweight, and crippled by gout and his jousting injury. For a fit 20 or 30 something soldier to wear such a suit for several hours would have been hot and sweaty, but quite bearable except in the hot summer sun or the cold of winter. 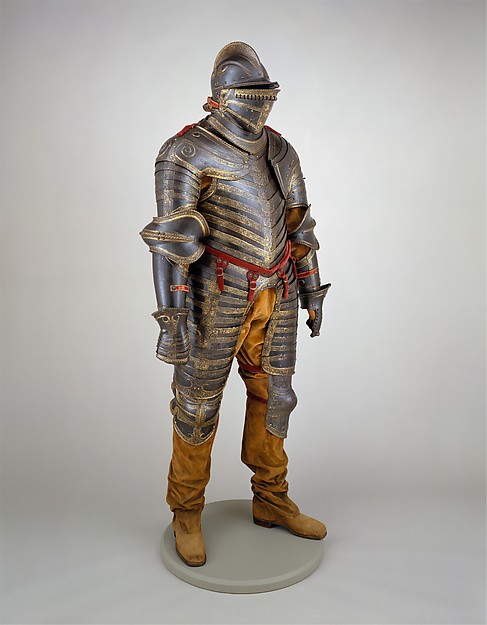 Even for 5'11"" (1.8m) Henry at over 300 lbs (135kg) and enhanced with gold, this suit of armour commissioned for Henry weighs only 50 lbs - roughly half the weight of a modern USMC march pack. Soldiers were more than capable of fighting, running, and even jumping while wearing it. If a guard was of a financial position to afford full plate armour it would most certainly have been worn on duty.

Note that the Emperor Frederick I (Barbarossa) marched across much of, if not all, the Anatolian Plateau in full armour - as evidenced by his drowning in hip-deep water after being thrown from his horse, weighed down by said armour.

I don't have the quotations. But I think I remember that Emperor Maximilian I (died 1519) had a child sized suit of armor made for his grandson the future Emperor Charles V (1500-1558) even though Charles could only use it for a few years.

I think I also read something about ceremonial suits of armor being made for the pages of a 17th century Emperor, probably boys not yet of full stature.

Russian Tsar Peter II (1715-1730) is sometimes depicted in armor, despite dying at the age of 14. Of course he might have been painted in imaginary armor.

In short, there is evidence that boys sometimes wore more or less complete armor. So bigger and stronger bodyguards could also do so.

But the medieval guards of an Emperor, king, or noble usually just used normal dress. Often they might be dressed in the ruler's livery colors or have his badge on their clothing or have uniforms in the late medieval period. Body guards might use armor in battle or in fancy ceremonies, but probably not for everyday use.

38
How did Medieval armies survive the use of mail armor in the deserts of the Middle East?
8
How were shields fastened to soldiers' backs?
41
Why were helmets and other body armour not commonplace in the 1800s?
31
How did medieval manors handle population growth? Was there room for more fields to be ploughed?
6
Did healers in medieval Europe use moldy bread in poultices for wounds?
12
Did medieval people wear collars with a castellated hem?