Why have North and South Korea stopped marching together at the Olympics?

In the 2000 Sydney Olympics, we saw the teams of North and South Korea marching together. This was repeated for the 2004 and 2006 (Winter) Olympics.

This didn't happen in 2008 (and we can understand that the relationship between Korea and China is very sensitive, so we allow them some diplomacy.) But in 2012 in London they didn't march together.

So I'm wondering - what is going on? Have they stopped now?

My question is: Why have North and South Korea stopped marching together at the Olympics?

Because it was decided that the two teams would compete separately.

Originally, there were hopes for the two teams to not only march as one in the 2008 Olympics, but to compete as a single entity, a 'Korea' team. However, negotiations failed, and the two teams ended up marching separately as a result.

Since then, there have been several diplomatic incidents between the two countries, and due to the changed relationship, it is unlikely we will see them marching together again for the foreseeable future.

The link is deprecated, but it roughly says:

The flag was not used in the 2008 Summer Olympics in Beijing, China due to the decision made by the Beijing Organizing Committee for the Olympic Games (BOCOG) and the International Olympic Committee (IOC), that the two teams would enter separately. The two countries also marched separately at the 2012 Summer Olympics in London. North Korea did not participate in the 2014 Winter Olympics in Sochi, Russia.

The flag mentioned is the Korean Unification Flag, which looks like this: 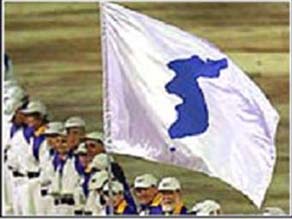 Not the answer you're looking for? Browse other questions tagged sports korea north-korea olympics or ask your own question.

11
Which have been the most and least successful Olympics in terms of economic impact?
3
Why have the economies of North and South Korea diverged since 1970?
5
When did Japan and the Three Kingdoms of Korea first meet?
5
Why was only the Silver medal awarded for music at the 1932s Olympics?
6
Why did the Australian IOC deny that Peter Norman was excluded from the 1972 Olympics for supporting racial equality?
8
Why didn’t the Chinese leave troops behind in North Korea after the Korean War?
5
Why do schools in Taiwan, Japan, and South Korea use the Westminster Quarters as school chime?