What was the first major technological advancement that occurred after the fall of the Roman Empire? [closed]

Popular perception is that technology and science stopped advancing for quite some time after the fall of the Roman Empire. Is this true? Or were significant advances steadily made, just at a slower rate? When did these advances occur, and what were they?

It depends what you mean by the fall of the Roman Empire. Are you talking about the sack of Constantinople in 1453, or the second sacking of Rome in 476? Based on your first sentence, I'm assuming you're talking about the latter. Science continued on just fine in the east, and in Constantinople. Greek fire was a pretty big thing that I can think of off the top of my head, but that was 672, and you probably want something closer to 476. The Hagia Sophia was rebuilt in 532 and had the largest dome in the world for almost a thousand years.

If you're only wanting Western European developments, then yes, things did slow down somewhat, as the lack of centralized power in the Italian Peninsula led to more tribal warfare between Germanic and Gallic peoples. The Franks developed over the next several hundred years as well, and they were no slouches either. Sure they weren't inventing dromons and turtle ships, but civilization was still strong.

Basically, yes, there was still growth in the west, albeit at a slower rate since the centralized economic infrastructure necessary for big scientific advances was for the most part lacking. In the near east, growth continued just as it had for hundreds of years prior. The middle east was doing fairly well, though, and within 200 years, Muhammad had started the Caliphate and was rivaling the Byzantines in terms of military capability. It is also important to remember that from the 3rd, up to the 8th century and beyond, the plague would periodically show up to ravage centers of high population. So that threw a bit of a wrench into things.

As was mentioned in the comments, that doesn't even bring China into play. Up until the 14th/15th century, China was the strongest centralized military state on the planet.

First of all, the Romans were not particularly known for being scientists. Can you even name a Roman scientist or inventor? It's not that easy. I can name a lot of GREEK scientists: Aristotle, Euclid, Eratosthenes, Archimedes, Heraclitus, Hipparchus, Ptolemy, etc. About the only Roman scientific author I can think of is Pliny, however, Pliny was not really a scientist, he was an encyclopedist and what did he write about? Mostly the work of GREEK scientists.

So, if you think the Romans were big inventors or scientists, you have the wrong idea. In fact, I can name more Greek scientists killed by Romans (Archimedes for example), than I can name Roman scientists.

In terms of the most major advancement during the 5th century (after the Western Roman Empire collapsed and the city itself was largely obliterated) I would probably say the forged stirrup. The Huns had introduced the stirrup to the world, but their stirrups were made out of bone and not easily duplicated. The Romans figured out how to imitate these stirrups in steel. This would have required a very high quality, malleable steel. So, I strongly suspect some important innovations were made in steel metallurgy at this time to make this possible.

The typical metal alloys available before 400 AD, would rapidly fracture or break if used as a stirrup, so there must have been an important advancement made in steel quality.

The steel stirrup allowed for a special new kind of troop called a "bucellarius". These were the shock troops of the General Belisarius. They carried a new kind of weapon (also introduced by the Huns): the mounted lance. It is only possible to use a mounted lance if you have stirrups. Also, the bucellarii could fire arrows from the saddle which is difficult without a stirrup. 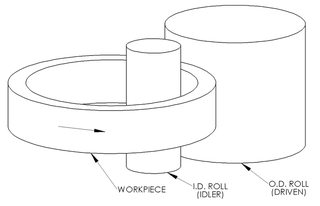 The principle of ring rolling (from the Wikipedia)

One possible invention that may have made this possible is ring rolling. This is a technique for forging a ring of steel and results in a very strong loop. This would be the first step in making a steel stirrup that would be strong enough. Unfortunately, little is known about ancient forging techniques, but if ring rolling was invented at this time, then that would explain the appearance of the stirrup.

I suppose you are asking of the major technological advances in Europe. (If otherwise, perhaps the the most important inventions were made in China, gunpowder, for example. Paper was invented before the fall of the Roman empire.)

In Europe, the two most important technological advances in the Medieval time were eyeglasses (1286) and mechanical clocks (1176).

Of course, this is a very long period between the fall of the Roman empire and these inventions. But I suppose that no MAJOR technological advances were made during this period: this was a period of general decline (in Europe and in the Middle east) if not a complete collapse of civilization.

Not the answer you're looking for? Browse other questions tagged ancient-history middle-ages ancient-rome technology science or ask your own question.

28
What is the evidence to claim that political order in ancient Rome was sufficiently different under “kingdom”, “republic” and “empire”?
7
Is there any way to historically consider the cultural severity on a disease or impairment? (specifically during the Roman Empire)
22
What role did the Eastern Roman Empire play in the fall of the Western Roman Empire?
12
The Needham Question: What stunted China's technological and proto-scientific advancement?
21
What is the last historical mention of people worshipping the Roman gods?
9
What was preventing the populace from progressing in medieval times?
6
What Roman institutions were obsolete by the end of the Republic?
24
Did ancient Romans anticipate the fall of Rome?