I tried to Google this but I couldn't find a definitive answer.

Dawson Creek has its own timezone. My timezone database tells me that on 14-Apr-1918 @ 10:00am UTC its timezone became PDT (and then subsequently PST, PWT, PPT and finally MST), but I can't find any record of what it was before that.

According to Wikipedia it incorporated as a village on May 26, 1936, but prior to that, that land still belonged to British Columbia, no? B.C. has existed since July 20, 1871 as far as I can tell. Would it use B.C.'s timezone then? But that doesn't really help me either, because I don't have any time history prior to 1918.

I guess there wasn't much of a standard back then, but is there any generally accepted time that historians use? Like, they had watches back then, right? If I was a farmer in BC, Canada in the year 1900, what would I set my pocket watch to?

History of Time Zones
The 1884 switch from Local Mean Time to Pacific time is based on the 1884 International Meridian Conference, held in Washington, D.C. The United States and Canada faced a mutual problem in that they spanned multiple time zones. Railroads were the driving force behind standardizing time, and Canada was one of the leaders in this regard. 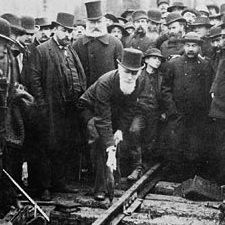 source: https://en.wikipedia.org/wiki/File:LastSpike_Craigellachie_BC_Canada_-_cropped.jpg. Fleming is the tall gentleman with the tall hat standing behind and to the left of Donald Alexander Smith, who is driving in that last spike.

Fleming had previously proposed a single time used around the world centered on what is now the 180th meridian. This would have placed the awkward astronomical switch at noon from one day to the next in the middle of the Pacific Ocean. This never caught on. The solution accepted at the 1884 conference, which Fleming attended as the representative of Canada, was to make the Greenwich meridian the center of everything time-wise, and to switch the transition from one day to the next from noon to midnight. This is the origin of what we now call UTC (Coordinated Universal Time).

The 1884 conference did not mandate splitting the world into time zones. This was left up to individual countries, and within countries, subdivisions of those countries. The southern portions of Canada, which were already interconnected by railroads, had already done that, at least unofficially, and at least for those portions of Canada interconnected by railroads and telegraph lines.

The first train came into Dawson Creek in 1931. Even if a settler had a pocket watch, there was no way for him to synchronize it to some standardized time. There was no internet, no radio, no train, no telegraph. Whether there were any settlers in Dawson Creek on New Years Day in 1900 is dubious. The Canadian government opened the Peace River District to settlement seven years later. To the very few people in the vicinity Dawson Creek at that time who cared about details such as minutes, it was about 20 minutes after sunset on New Year's Eve, 1899. To the rest of the people there at that time, it was a bit after sunset, but well before it was too dark to see.

If a settler in that area did have a pocket watch, he might have been able to synchronize it with respect to local noon. If the settler was educated enough to have known about the equation of time (and to have cared about the distinction), he might have incorporated that into setting the watch so as to make it follow local mean time as opposed to local solar time. Until time-synchronized commerce became common, local solar time was a better indicator of the time of day than was mean time adjusted to a time zone.

The above is not meant to disparage farmers and settlers. Read the writings of Robert Service and Jack London, neither of whom was "uneducated". Admittedly, they were writing about a locale even further north than Dawson Creek, but not that much further north. Neither Service nor London worried that much about time. They worried about surviving the winter.

Asking what time it was in some place where people did not care about measuring time with respect to a clock in Greenwich, England, and couldn't have done so even if they cared to do so is a bit silly.

4
sense of time in people with no means for time measurement
3
How did ancient Dravidians tell the time?
32
Why of all units is Time standard?
12
Why does clock time start in the middle of the night?
4
When modern time measurement first appeared and who invented it?
0
Was respiratory rate used as time measurement?
3
What is the history of time tracking?
1
What Time of Day Was Hitler's Opening Speech of the 1936 Summer Olympics?
25
How did people wake up on time before alarm clocks?
2
What time zone was used in Sikkim before it became a state of India in 1975?