What are the effects of creating inflation to eliminate domestic debt?

T.E.D. commented on this answer:

Sometimes (particularly in developing countries) they literally are printing more money. In the USA typically we increase the money supply to make up for some kind of undesirable market tightening (which in theory should not cause much inflation). In developing countries, it is often done just to inflate away domestic debt. It doesn't hurt the decision makers any, as they can hide their assets in foreign currency. But it absolutely trashes domestic savings.

What are the advantages and disadvantages of inflating away domestic debt by literally printing more money? What are some examples from history? Have the theories of inflation been supported by historical evidence?

The prototypical example I was thinking of when I wrote this was the Weimar Republic. (Decidedly not a developing country, but a very well-studied example of the principle). They got kind of a double-whammy at the end of WWI. The previous government under Kaiser Wilhelm had financed most of the war, acting on the assumption that reparations from the losers would pay it all back.

When they lost instead, the boot was on the other foot. The new Republic that took over found itself with all that internal war debt, plus its own huge bill for reparations to the victorious allies.

Germany's strategy for dealing with this was to print themselves more cash, use it to buy foreign currency to repay the reparations, and let the ensuing inflation wither away their local debt to worthlessness. 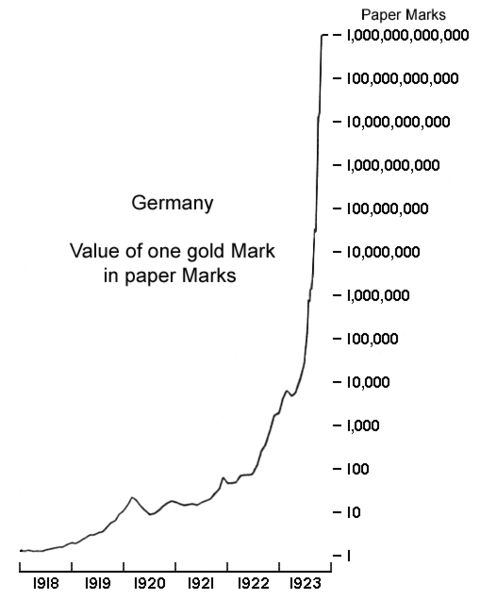 Here's a commemorative coin from the era: 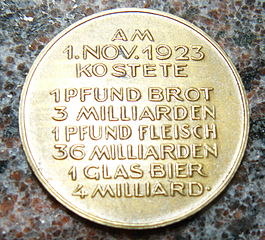 The text translates to:

It was a fairly effective strategy, except of course that it impoverished the German people, destroyed their economy, and dramatically strengthened extremist political parties.

What are the advantages? Inflation can ease the debt load. Rhode Island chose this as a strategy in the 1770's/80's in the US, which is why it was the last state to join the Union (RI was deeply in debt due to speculators, so they inflated their currency as a strategy ). Nobody wanted Rhode Island dollars

What are the disadvantages? Obviously inflation is bad for the lender. If inflation is rising and likely to continue to rise, then lendors must take this into account. That means that credit may be restricted, which may inhibit large and cooperative projects. Inflation is bad for anyone who is saving. Anyone with cash assets watches their value erode. Spend your money now because it will be worth less tomorrow. Again, this discourages investment in the future. This is the key to the italicized portion of your quote. If the leadership of a developing country inflates the domestic currency they can preserve their assets in foreign denominated currency, but ordinary citizens watch the value of their holdings dwindle away.

Mike Walden summarizes that inflation is bad because

(All of those assume that you don't have the opportunity to anticipate the inflation and shelter the value in foreign denominated currency, which the leaders do in the example you cite).

You restricted the question to domestic, but inflation theoretically causes other nations to change their exchange rates for your currency, which makes it more difficult to buy foreign goods. That can have significant consequences in a world where economies are coupled. (Petroleum in the 70's comes to mind). Developing countries also tend to be somewhat coupled - since most developing countries don't have the infrastructure to permit competitively priced domestic manufacture of industrial goods. (including things like farm equipment, medicine, petroleum, etc.)

Since this question deals with economics, I think this blog entry by Prof Paul Krugman provides us with another good (counter-)example. He provides the example of France in the 1920s, and shows that the effect on a country with its own currency is not as severe as it is generally believed.

Not the answer you're looking for? Browse other questions tagged economy political-history or ask your own question.

9
What was the reason for inflation in Britain after the Black Death?
2
What process have countries followed when creating constitutions?
9
Inflation rates in Spain and Portugal during the 16th century
20
What were the key factors to the fall of domestic socialism in the USA?
6
Did the U.S economy flourish after national debt was eliminated by President Andrew Jackson in 1835?
0
What was the purpose of creating the Weimar Republic?