UK involvement in Yugoslavia during WW2

What was the role and the level of involvement of the United Kingdom in Yugoslavia during World War II?

world-war-two ww2-european-theater yugoslavia
Share
Improve this question
edited May 5 '20 at 19:06

Yugoslavia was established before WW2 (on 3 October 1929 the Kingdom of SHS was renamed to Kingdom of Yugoslavia), but it is true that after the WW2 the entire regime changed. (During and) after WW2 there was communist republic with president Tito, named Democratic Federal Yugoslavia (1943), renamed to the Federal People's Republic of Yugoslavia in 1946.

On 25 March 1941 Hitler made Yugoslavian government to sign the Triparte Treaty. That was followed by huge protests throughout the whole country. Senior military officers were also opposed to the treaty and launched a coup d'état when the king returned on 27 March. Army General Dušan Simović seized power, arrested the Vienna delegation, exiled Paul, and ended the regency, giving 17-year-old King Peter full powers. The new government decided to stay in Triparte Treaty, but at the same time they secretly connected with GB for help in military material (GB was encouraged by events from 27 March). This government also tried to connect with Soviet Union (a pact was made to help each other). Hitler then decided to attack Yugoslavia on 6 April 1941, followed immediately by an invasion of Greece.

The Axis Powers occupied Yugoslavia and split it up. The Independent State of Croatia was established as a Nazi satellite state, ruled by the fascist militia known as the Ustaše that came into existence in 1929, but was relatively limited in its activities until 1941. German troops occupied Bosnia and Herzegovina as well as part of Serbia and Slovenia, while other parts of the country were occupied by Bulgaria, Hungary, and Italy.

The government went to exile in London. The Yugoslav resistance forces consisted of two factions: the communist-led Yugoslav Partisans and the royalist Chetniks, with the former receiving Allied recognition only at the Tehran conference (1943). The heavily pro-Serbian Chetniks were led by Draža Mihajlović, while the pan-Yugoslav oriented Partisans were led by Josip Broz Tito. The Chetniks were initially supported by the exiled royal government and the Allies (before 1943), they but soon focused increasingly on combating the Partisans rather than the occupying Axis forces. From 1941 to June 1944 there was British representative in Chetniks' staff. Axis helped them with material and propaganda system. By the end of the war, the Chetnik movement transformed into a collaborationist Serb nationalist militia completely dependent on Axis supplies. In May 1943 the Partisans army connected with Axis. They got help in food, munition, medicine and so on. The Teheran Conference (1943): The Partisans of Yugoslavia should be supported by supplies and equipment and also by commando operations.

There was some role and involvement of GB in Yugoslavia. The involvement was much bigger after the war for borders, mostly about question of Trieste.

Sources for part of the answer:

Yugoslavia was created after WW1 (initially as the Kingdom of Serbs, Croats, and Slovenes), and as such had no reason to try and change the balance of power created in Europe as a result of post-WW1 peace treaties. Many members of the country's ruling circles were pro-British, and in March of 1941 they organised a coup d'etat. Hitler's response was to declare war on Yugoslavia. In barely two weeks, the country was overrun by Axis forces, and its government fled to exile in London.

The Communist partisans put up more effective resistance against the occupiers than the royalist/nationalist Chetniks, so the British and their allies gradually shifted their support to the partisans, even though they were communists. The British and the Western Allies assisted with this resistance with support in logistics, equipment, training, and air power. The decision to help the Partisans of Yugoslavia was made at a summit in Tehran attended by Churchill, Roosevelt and Stalin in December 1943 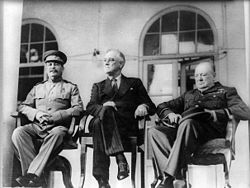 36
What was the reason for Soviet troops to withdraw from Yugoslavia in World War II?
5
What caused Yugoslavia to switch sides early in World War II?
8
Were some Yugoslav “nationalities” more pro-Axis/Allied than others during World War II
14
To what degree did women participate in the air war during WW2?
3
How did Yugoslavia economically survive the Cold War
6
Is it true that Serbia was offered “Great Serbia” instead of Yugoslavia at the end of the WWI by Allies?
8
What was Yugoslavia doing in the Angolan Civil War?