In WWII, what were the major differences in tank combat on the eastern and western fronts?

Some specific questions relating to the topic:

To narrow down this answer, I'm going to pick June - August 1944 to highlight the differences. The Western Front is mired in the Normandy bocage and the Eastern Front is fighting on the open steppes of Ukraine and Poland. These two pictures sum it all up. 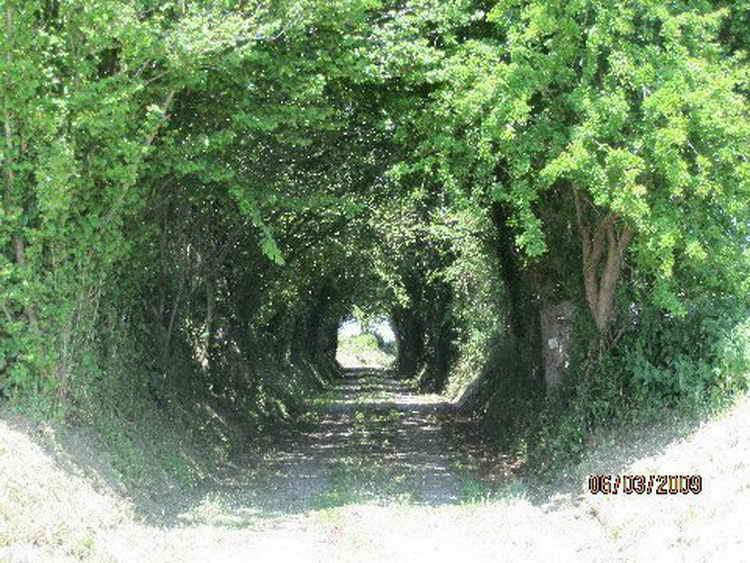 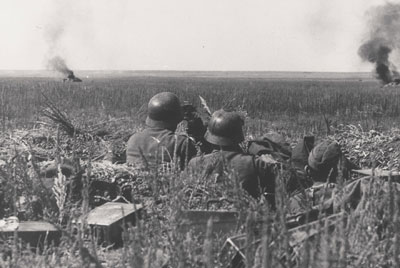 Ideal German tactics in the bocage would employ a hidden, turretless tank destroyer, probably a Sturmgeschütz III, or a towed anti-tank gun, firing down the most likely lane of approach. This would be backed by a few crew served machine guns, plus infantry armed with submachine guns (high rate of fire at short range) and hand held anti-tank weapons (probably panzerfaust) to mop up.

The relatively thin armor and weak guns of the Western Allied tanks, plus the bocage forcing them into a frontal attack at close range, allowed the Germans to employ the relatively cheap Sturmgeschütz. The low silhouette of the Sturmgeschütz lent it to ambush tactics, while the hemmed in ground meant the lack of a turret was not a serious disadvantage. German tank crews, fighting in defensive positions without a lot of maneuvering, required less training than the mobile warfare on the Eastern Front.

Infantry could use the bocage to infiltrate around the flanks of the road-bound Allied columns. In an ambush, panzerfausts would be used to destroy the rear vehicles in the column blocking retreat, and the front vehicles blocking advance. The whole column would be raked with flanking fire from solders in the hidden and impenetrable hedgerows.

A variation is what the Allies called "the hedgerow defense" which used the hemmed in nature of a Norman field to negate the Allied advantages in firepower and mobility. 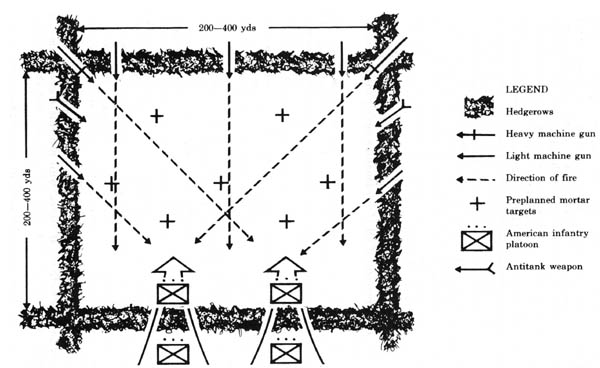 Any infantry advancing would be mowed down by concealed machine guns, and any tanks would be hit in the flank by concealed anti-tank weapons. Conventional assault by fire and movement did not work, there was no cover. This was eventually countered by combined arms. 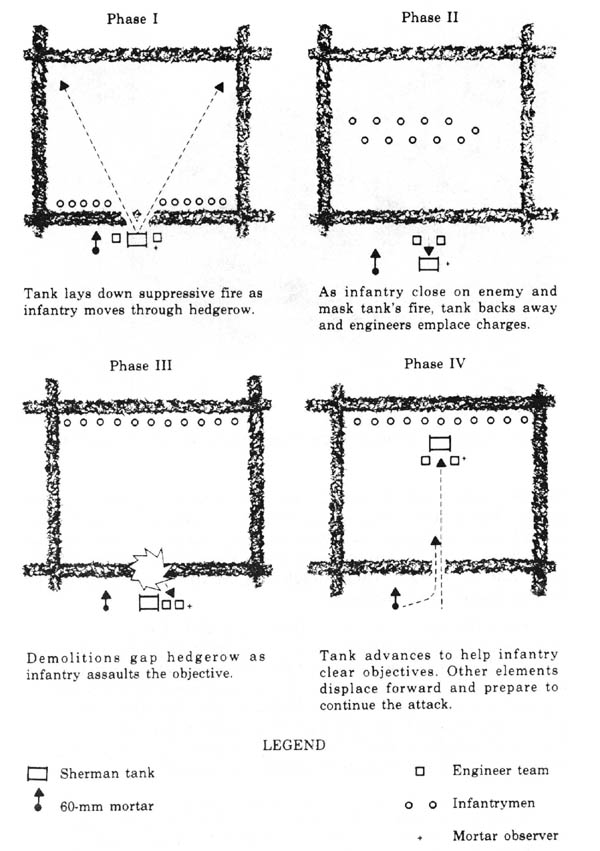 An Allied tank would fire white phosphorus into the corners to suppress, obscure, or drive off the German machine gun crews and then keep up suppressing fire without exposing the sides of the tank. Mortars and grenades would suppress the surrounding fields to keep the Germans from taking up flanking positions. Finally, engineers would blow a hole in the hedgerow (using pipes shoved in by the tank) to allow the tank to advance for close support.

German tactics had to adapt to Allied air dominance and lavish Allied artillery. To be visible from the air meant death by "Jabos" or "Jagerbombers", the German word for hunting fighter-bombers. To remain static in a known position meant getting shelled. Even a solid German defensive position eventually had to move under the weight of Allied bombardment.

On the steppes, range was king. The ideal tank engagement on the Eastern Steppes for the Germans was to employ the superior range, accuracy, armor, optics, and training of their tanks and tank crews to pick off the Soviets at long range.

The Soviet 76mm F-34 of the T-34 struggled to penetrate the front armor of a German tank even at 100 yards. The 85mm ZiS-S-53 fared significantly better if the crew could hit the target; Soviet tank crews were often poorly trained and their optics were poor.

Since German tanks were often outnumbered by the Soviets, German infantry would be used to slow down the wave of onrushing Soviet tanks, prevent attempts to flank, and deal with any Soviet infantry that might have gotten close enough to attack the German armor. Infantry would dig anti-tank ditches and set up ambushes with panzerfausts.

Because the tank arms race on the Eastern Front was so intense, the Germans had to use their heaviest and best armed and most expensive vehicles. However, this did not stop them from sending ponderous and overpowered heavy tanks like the Tiger II to the Western Front to break down in transit or be destroyed by Allied air power.

While the Soviets had air superiority, they never achieved quite the air dominance that the West did. Thus, Germans units could operate a bit more freely in the open. What they did have was lavish artillery barrages, mostly useful in the opening hours of a Soviet attack. As a defense, German armor would be deployed some ways behind the immediate front line to avoid being caught in the initial barrage.

While in the West the Germans were on the defensive, in the East, even in the Summer of 1944, the Germans would still look for opportunities to maneuver and counter-attack. Sometimes this would result in local victories, more often this would sap limited German resources.

To add on Schwern's answer, the Allies had to modify some tanks to go through the hedges of the Norman bocage, they called these Rhino tanks. See how the front of the tank has been modified: 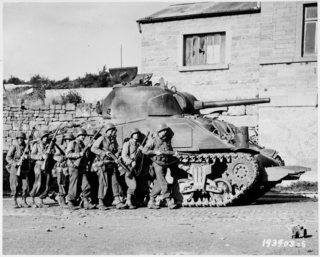 Bulldozers or tanks modified to carry a bulldozer blade were used to open gaps in hedgerows. Some hedgerows were so thick that engineers first had to blow a hole in the bank, which a bulldozer would later clear and widen. This time-consuming process slowed down the progress of the Allied offensive. Throughout July "innumerable" inventions were created by various American units to get tanks through the hedges quickly without exposing their weak underside armor. A hedgecutter developed by the 79th Infantry Division was in operation by 5 July, and a few days later, XIX Corps demonstrated a set of prongs that had been initially developed to create holes for the placement of explosives. These prongs were able to lift and remove a portion of the vegetation, enough so that the tank would be able to crash through to the other side.

Overall, the tactics were similar, the biggest difference being that the enemy had different tanks. You may read some historians talking about the "steppes" of Russia and so forth as though Russia is some endless desert, but that is not true. The limits to movement, forests, marshes and water features primarily, are just as common in Russia as in Western Europe, and in any case the enemy will generally use the landscape to their advantage. Nobody is going to park their tank in a big open field and just wait around for you to take pot shots at it.

Remember that the same commanders fought on both fronts. For example, Guderian fought in France, Poland and Russia extensively, and he used the same basic tactics in all places.

Tank warfare is mostly a duel between tanks. If a tank gets shot by a fixed gun then it was probably doing something wrong. No doubt, plenty of Shermans got shot up by emplaced 88s, but this was mostly due to the inexperience of the American tank crews who were in many cases 18-year-olds who were just off the boat and basically had no idea what they were supposed to do.

All armored units have mobile infantry with them which is necessary for protection and support. These special infantry ride on the tanks or other vehicles so they can move just as fast as the tanks.

Combining infantry units with tank units was believed, by Guderian at least, to be a serious strategic error. In his opinion tank divisions should be fully motorized and kept separate from slower infantry divisions. There were other German generals (infantry generals) who saw tanks as just support for infantry and tried to combine tank units into infantry divisions. In Guderian's view this was a serious blunder and had no strategically redeeming aspects.

There is weird myth that somehow Russia is some kind of flat, open "steppe". Although Russia does have steppes, they are to the east, far from the WW2 fighting. The terrain in France is no less "open" than that where the Russian tank battles took place. For example, in Kursk Oblast, the site of the biggest tank battles of the war, the entire northern sector is heavily forested and in that area are many wide rivers, including the Desna, the Selm, the Vorskla and the Psel, which turn the entire area into a complex maze. Even in the southern part of the sector where there is more open terrain, the landscape is quite hilly and filled with movement-limiting ravines, rivers and marshes. Here is an example of the terrain in Kursk: 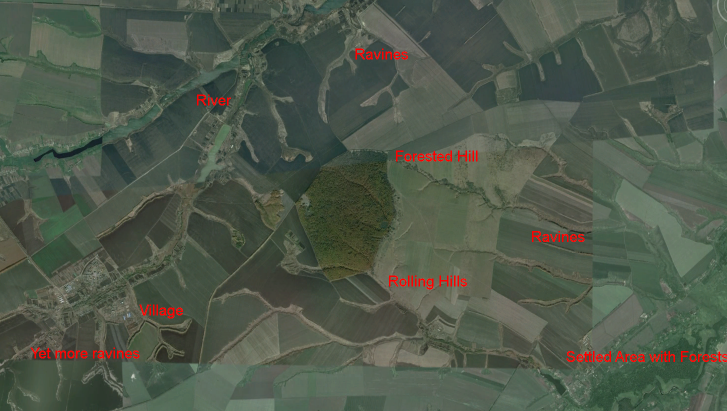 Note that this shows the "open" (southern) area of the Kursk salient. In the north it is heavily forested and even less accessible and open than the terrain above. The hill in the image is about 2 miles in diameter.

Good comments here. Absolutely agree with the comment that in the East "range was King" because indeed most of Russia is bad tank country....the one exception was the Kuban Steppe which the Nazi's failed to capitalize on.

In the West the Sherman was King because most of the Western action occurred in small towns and Cities where you needed to have a small and maneuverable tank to get anywhere. This changed once the USA got to Germany and Austria proper...but by then the War was pretty much over. The best Tank Country was in North Africa and that's where the Tank as a true weapon of War was realized. In the European Theater the most powerful mechanized weapon was the Jeep I think...almost zero maintenance, great fuel mileage, flexible and always there it's the one vehicle that turned Air Supremacy into Air Dominance for the Americans since you could always simply "drive around" any enemy and most of Germany was still using horses as it's "prime mover." Once the Americans broke out of the bocage Paris was liberated in a matter of weeks. Meanwhile the Russians and Germans were still slugging it out in the East in the greatest and most violent Battles in human History. Most folks don't realize that the US Army made it as far as Czechoslovakia by 1945...that's a long way from Washington DC.

Russia didn't even declare War on Japan until 3 days prior to the War ending....so needless to say "East Asia is a long way from Washington DC too."

In other words Tanks played a minor roll in general scheme of things and required an enormous logistical "train"...something the Germans never quite mastered although they came close in North Africa and should have mastered in Southern Russia but did not.

Good questions and answers though.

Not the answer you're looking for? Browse other questions tagged world-war-two tanks combat or ask your own question.

9
Did the Torch operation help doom the Germans at Stalingrad?
6
What was American anti-tank doctrine during WWII on paper, and how did it differ from in practice?
4
How were snipers used on the western front during WW2?
3
When and why did tank crews cover their tank markings in WWII?
15
How dependent were the Germans on horse transport in their invasion of the Soviet Union?
5
What was the strategic importance of Moscow to the Soviet Union in Dec 1941?
1
What evidence is there of tank-vs-tank combat in Asia during the second world war?
21
Why did it take so long for the Germans to develop the first tank model in World War I?