What are the height units of contours on this WW2 topographic map?

What are the units seen on the contours and spot heights of this WW2 topographic map? I'm not sure if the map is of Russian or German origin: I've seen the same style and map symbols on Russian army maps and German army maps (they are often the same apart from transliteration between latin and cyrillic alphabets). Although this particular map was certainly used by the German army - there are annotations in German on it of military relevance.

The major contours (every 5th contour line) are labelled as 137, 154, 171. The spot heights show as e.g. 166,6 (comma being used as the decimal seperator in German, for instance) make me suspect that that it is 166.6 meters, but obviously the contour heights would be rather peverse in that case - each line is 3.4 meters. So presumably the original contours are based on some other unit system.

Are the numbers here in meters? And what units have been used when the map was originally created? 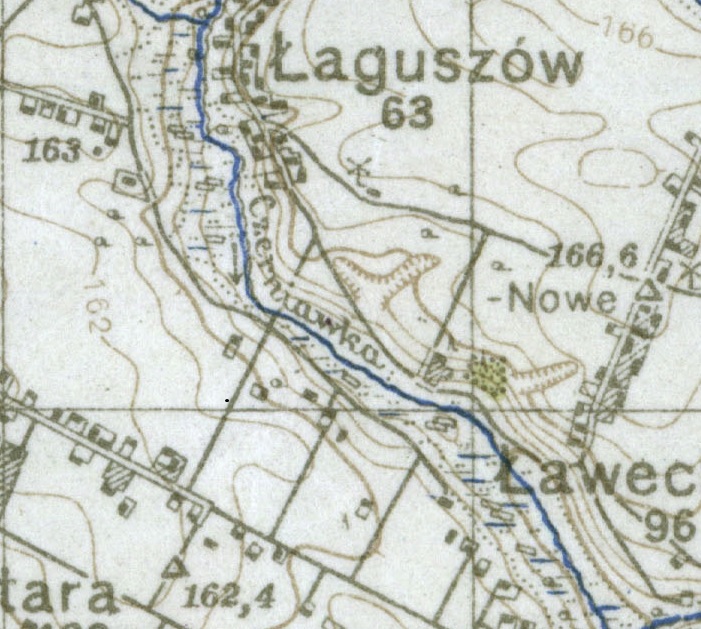 Those measurements are in meters. The area around Łaguszów is about 160 meters above sea level.

I do not see the divisions of 3.4 meters to which you are referring on the map. However, in old Germany there was local land measure called the rod ("ruthe") which was highly irregular and varied from place to place and could be anywhere from 3 to 5 meters in length. The Prussian standard Ruthe was 3.466m, but as I said, in actuality for a given place the Ruthe could vary considerably.

Not the answer you're looking for? Browse other questions tagged world-war-two maps or ask your own question.

1
What area of Los Angeles does this historical map depict?
14
What are the historical reasons for the conventional map orientation?
14
Context for this 1871 humorous map of Europe?
13
What is a "Schwedenschanze" on an 1830's map of Eastern Bavaria?
9
What was the most accurate map of the world before artificial satellites?
2
What is the earliest map of Washington, D.C.?
52
Was Switzerland really impossible to invade during WW2?
13
Do we know the situation in Britain before Sealion (summer 1940)?
44
What is the logic for the map maker classifying the map this way, specifically in Canada?