Is this tale of WW2 true?

I heard this interesting dialog in Season 1 of Mad Men.

You know how Hitler got Neville Chamberlain to give him everything at Munich? He held the conference at an old palace that forbade smoking. And after an hour and a half of not smoking, Neville Chamberlain would have given Hitler his mother as a dance partner.

I've been trying to seek clarity of this online but haven't been able to find anything useful. Mad Men usually tries to honour history, but did this really happen? I guess the latter part of the statement which suggests why things went the way they did is subjective, but what about the actual setting of the meeting?

There's problems with that statement. The Munich Agreement was not agreed upon at "an old palace". In fact, Chamberlain and Hitler met at several locations prior to signing the agreement, none of which can be described as an "old palace".

First, on September 15th, at Berghof, Hitler's residence in the Bavarian Alps. This was hardly an "old palace", it was a house built in 1916 and renovated just a few years before the negotiations. Smoking was allowed on the terrace. 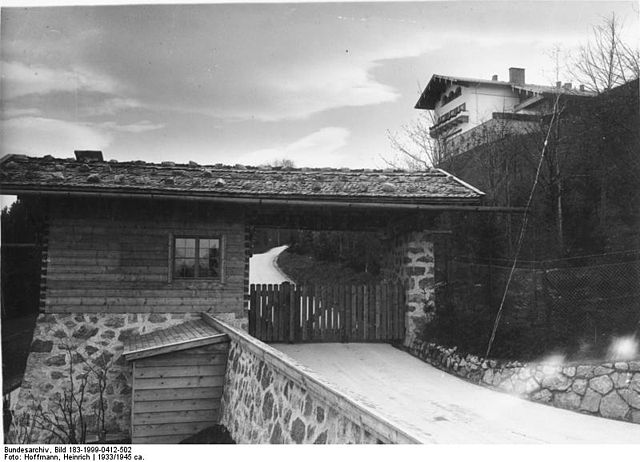 On September 22nd Hitler and Chamberlain met again, this time at the Rheinhotel Dreesen in Bad Godesberg near Bonn. This was a hotel built in 1894, not an "old palace". As a hotel in the 1930s I can only assume they allowed smoking. This is a modern photograph, but the exterior hasn't changed much in 70 years.

The final negotiations happened at the Führerbau, at the time a very new building. It happened in this very room, Hitler's office. 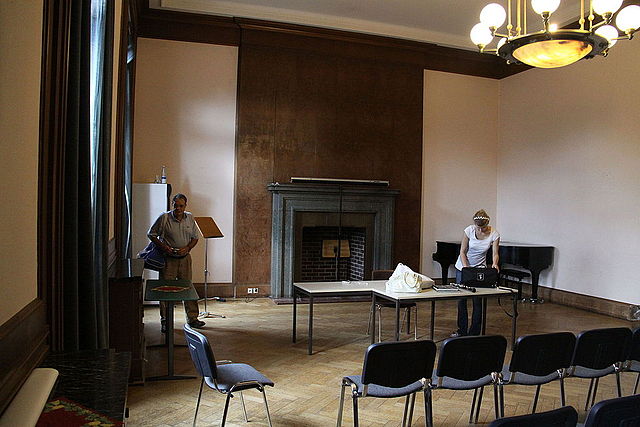 Hitler himself detested smoking, but I can't find solid information about smoking at the Führerbau. I've found a great many contemporary photographs of people at the Führerbau, but none features an ash tray or someone smoking. As this was a large office building, I can only assume smoking was allowed else everyone working there would be made miserable.

There is a historically accurate deception story in the Munich Agreement negotiations.

Later in the meeting [on Sept 22nd at Rheinhotel Dreesen], a prearranged deception was undertaken in order to influence and put pressure on Chamberlain: one of Hitler's aides entered the room to inform Hitler of more Germans being killed in Czechoslovakia, to which Hitler screamed in response "I will avenge every one of them. The Czechs must be destroyed." The meeting ended with Hitler refusing to make any concessions to the Allies' demands.

It's unfortunate Mad Men chose to make something up rather than use a historically accurate story. You'd think this sort of power play would fit great with their setting.

The negotiations at Munich involved a lot more than one man's smoking habit and were very long and drawn out.

Ultimately, Chamberlain's willingness to allow the annexation of the Sudetenland was based on a desire for peace, not an attempt to get to a smoking room faster.

It should be mentioned that close advisors to Chamberlain had informed him (rightly or wrongly) that the Sudetenland was heavily Germanic and that the population in those areas resented Czech control. Since Poland got a slice of Czechoslovakia too, it was hoped that would make them happy.

From a social perspective, the main problem was not Chamberlain's smoking, it was the interaction between the upper-class Chamberlain and the lower-middle-class Hitler which produced a lot of friction because Hitler felt that Chamberlain was looking down his nose at him the whole time.

I realize that it may be seem cute and funny to reduce a pivotal world event like this to turn on a smoking habit, but in reality the idea has no basis in historical fact.

Agreements are worth nothing unless the other government officials and the general population are willing to abide by them. In the case of the Munich agreements most of the British and French population were more or less willing to go along with them. If they hadn't been more or less accepting of them there would have been massive protests against them and their governments would have had to back out of them.

Thus the Mad Men anecdote falsely depicts Chamberlain as having far more power to make agreements without considering public opinion than he actually had, so that depriving him of his nicotine fix would be enough to change the course of history.

1
Is it true that the soldiers returned from WW2 either didn't marry or kept themselves from families?
6
Is this true that the Soviet Army soldiers had no helmets in the beginning of WW2?
1
What are the height units of contours on this WW2 topographic map?
19
Is this anecdote about Stalin, Roosevelt and Churchill true?
14
Is this Hitler's account of seemingly counterproductive British radio war propaganda true?
1
Can anyone tell me if this is legit WW2 Nazi ring?
5
What battle of WW2 is depicted in this Battlefield V level?
15
Based on his service record, where was this soldier deployed in WW2?