Was there a viable alternate supply route to Australia during World War II?

In the spring of 1942, there was the danger, or at least the fear, that Japan would conquer all of New Guinea, the Solomon islands, and ultimately Samoa, thereby cutting off Australia from American supplies and technical assistance from America's west coast to Australia's southeast coast, and thus "isolating" Australia.

Was there a viable alternate supply route to Perth, Australia on the southwest coast to keep Australia in the war?

(The distance from either Miami or London to Perth through the Cape of Good Hope is over 9,000 miles; from there to Sydney on the southeast coast is another 2,000 miles. From Los Angeles to Sydney would be 7,500 miles, meaning that the "Perth" route would be at least 50% longer.)

world-war-two australia
Share
Improve this question
asked May 9 '16 at 21:32

When I look at what the shipping miracles the Allies managed during WWII, such as the Persian Corridor, I'm inclined to say yes, they would have made it work somehow.

Even had Operation FS been a success, there was still a supply line from the US west coast to Victoria (SE Australia). Ships would have to take an increasingly southern route to avoid Japanese controlled waters. The normal 28 day journey would stretch out and strain Allied shipping already pushed to its limit.

To land and maintain American forces in Australia required more than twice the ship tonnage necessary for similar American forces in Europe or North Africa... The peculiar topography and character of the Australian continent made the task there one of extreme difficulty. Australian distances are tremendous, the communications--road, rail, and electric wire--were limited and complicated by the absence of standardization, and the frontier for 4,500 miles was exposed to possible Japanese landings...

At that moment [Jan 1942], however, the threat to Australia was so serious that most of the shipping immediately available in the Atlantic in January had to be hurriedly employed for the movement of 25,000 troops to the southwest Pacific, largely to garrison New Caledonia. It therefore was not possible to send more than a single division to Ireland until the following summer. 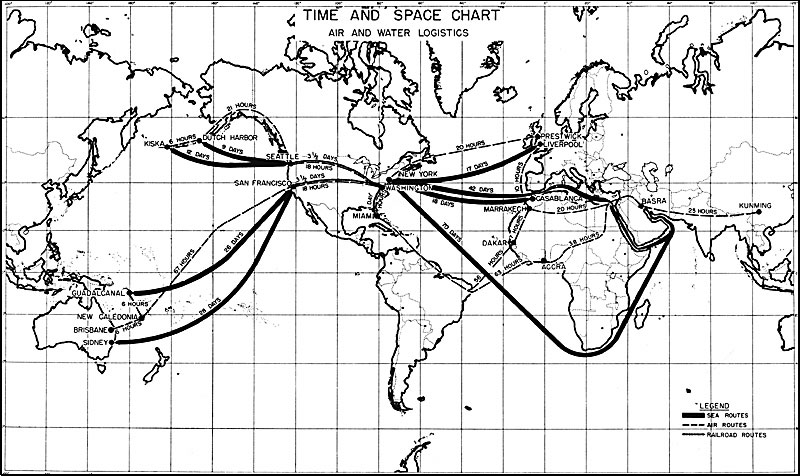 This would have greatly strained the Allied supply line beyond the increased travel time. Fewer ships would have the endurance to make such a long journey. The lack of features in the extreme southern Pacific would make navigational problems far worse, plus the storms. That far south ships would encounter the Roaring Fourties particularly strong winds from the west blowing against them slowing their speed and adding to fuel consumption.

As for Western Australia, Perth is not much further away from support than Burma was. However, ships would have to cross the mostly featureless southern Indian Ocean with few navigation markers or opportunities for refueling.

An example of an alternate route for getting heavy bombers to Australia was used in Jan 1942.

Further deliveries to the Far Eastern area were hampered by the loss of Wake Island which necessitated the immediate development of an alternate trans-Pacific route via Christmas Island, Canton Island, Fiji, and New Caledonia. The new route was opened to traffic during January 1942. In the interim all heavy bomber air movements were immediately undertaken from Miami, Fla., via Brazil, equatorial Africa, and India through Sumatra to Java and Australia. The loss of Sumatra in February terminated deliveries by this route... The planes flew to Australia in 10 days. The ground units matériel to service the planes and keep them flying required approximately 2 1/2 months or longer for the transfer.

Not the answer you're looking for? Browse other questions tagged world-war-two australia or ask your own question.